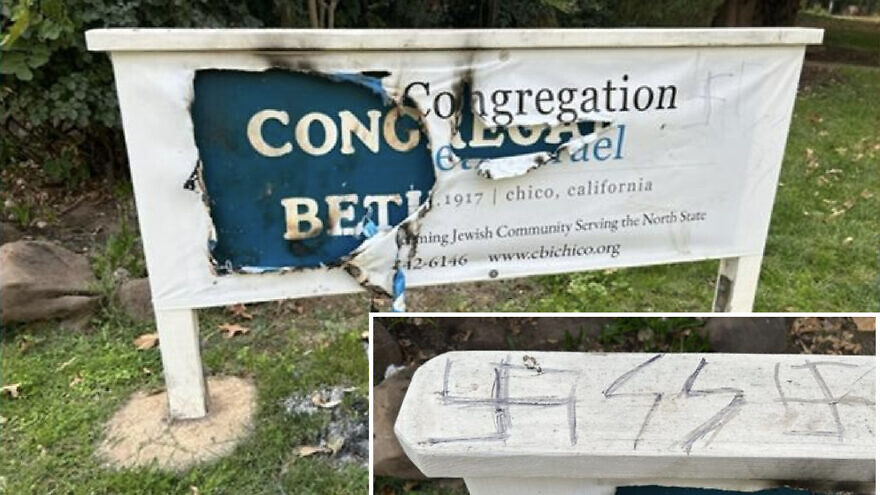 (November 7, 2022 / JNS) A 36-year-old man has been arrested in Chico, Calif. for arson and hate crimes after he set a synagogue sign on fire last week and vandalized a mural dedicated to missing and murdered indigenous women.

According to the Chico Police Department, they received a call on Nov. 2 “regarding a vandalism incident at the Congregation Beth Israel synagogue. … Officers arrived on scene and discovered that an unidentified suspect(s) burned a sign in front of the synagogue and drew swastikas on the sign. Officers collected evidence and began an investigation.”

Police said they were treating the vandalism as a hate crime, calling the incidents “serious acts against members of our community” that “will be investigated thoroughly.”

The next day, the artist behind a mural intended to raise awareness about the plight of missing and murdered indigenous women in the region, called police to say that someone “drew swastikas and obscene language on the mural and attempted to light the bottom on fire,” according to a statement by the Chico Police.

The Chico Police arrested the suspect, Thomas Bona, 36, after receiving complaints about his behavior at California State University-Chico. Bona is not a student, but was inside a school building when police were called to the scene.

After encountering Bona, a patrol officer and investigators from the Department’s Violence Suppression Unit “obtained evidence and statements providing probable cause for his arrest for both hate-crime incidents,” said a police statement. “Bona was arrested and booked into the Butte County Jail with a request for charges of hate crimes, arson, vandalism and a violation of the terms of post-release community supervision.”

Rappaport added, “We will emerge from Shabbat fortified to continue the work of standing in solidarity with all of our neighbors … and all people and all communities vulnerable to hate in this world.”