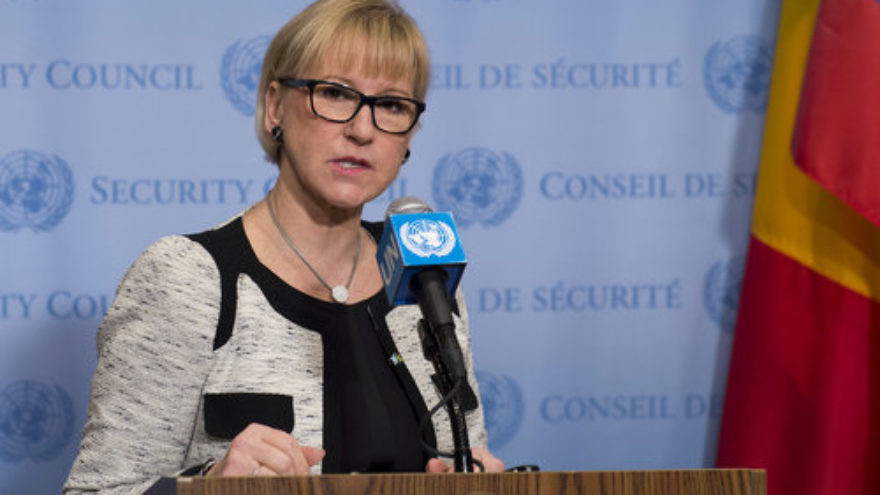 (May 7, 2017 / JNS) Should Israeli officials be surprised Sweden was the only European Union country to vote for an anti-Israel UNESCO resolution denying Israeli sovereignty over Jerusalem?

The question comes just days after UNESCO’s executive committee May 2 approved a resolution calling Israel an “occupying power” in Jerusalem and saying any Israeli efforts to assert sovereignty over the holy city are “null and must be rescinded forthwith.” The resolution passed in a 22-10 vote.

“It was no surprise to see that Sweden once again has aligned itself with Muslim countries, dictatorships and religious regimes against the only democracy in the Middle East,” Israeli Foreign Ministry spokesman Emmanuel Nahshon told JNS.org. “Unfortunately, Swedish Foreign Minister Margot Wallstrom has made numerous anti-Israel declarations…and Sweden under the current government has voted systematically against the state of Israel [at the United Nations].”

Ahead of the May 2 UNESCO vote, Arab states backing the resolution had lobbied the EU countries, hoping that including softened language reaffirming “the importance of the Old City of Jerusalem and its walls for the three monotheistic religions” would unite Europe behind the anti-Israel measure.

Israeli officials also reportedly lobbied European countries before the vote, resulting in Italy vowing to oppose the resolution, leading other EU countries to either oppose the measure or abstain from the vote.

“This was somewhat surprising,” Svante Cornell, a senior fellow at the American Foreign Policy Council, told JNS.org, “since it has not been Swedish diplomatic tradition to break the EU consensus. It singled the country out as the most negative toward Israel in the group.”

Sweden had already broken rank with Europe in October 2014, when it became the continent’s first country to recognize a Palestinian state—going beyond some other European nations whose legislatures held symbolic votes backing Palestinian statehood, without such recognition extending to their executive branches.

“Sweden is emerging, it is fair to say, as the Western European state most critical of Israel,” Cornell said.

“Swedish-Israeli relations are at an all-time low right now,” Magnus Norell, a Swedish adjunct scholar with the Washington Institute for Near East Policy, told JNS.org. “And I don’t see any signs of an immediate improvement.”

According to Norell, Sweden voted with the Arab bloc at the U.N. May 2 out of “sheer ignorance of the historical background and context, ineptness (poor communication between the Foreign Ministry and the governing administration) and identity politics.” The government’s “pro-Palestinian attitude often leads to supporting all kinds of initiatives, as long as it’s perceived as being against Israel,” he added.

Norell said the Swedish mindset of “rooting for the underdog” is the reason behind its pro-Palestinian stance. It’s also the thinking behind Sweden taking in more refugees per capita than any other European country, which has led to the current Muslim migrant problem the nation is grappling with today.

Sweden, which has a population of 9.5 million, allowed in 160,000 asylum seekers in 2015 alone, double what it previously accepted in any single year. Sweden’s immigration problem is blamed for growing violent crime. While some media outlets downplay the crime, others report the situation is out of control.

The Stockholm suburbs of Tensta, Husby and Rinkeby have no-go zones where riots have broken out. Jewish-American undercover filmmaker Ami Horowitz was attacked in Husby in 2016 while investigating crime in these areas. In Sweden’s largest northern city, Umea, which has a population of 121,000, the JCC recently closed its doors after a wave of anti-Semitic vandalism and threats.

Last month’s truck-ramming terror attack in the heart of Stockholm, killing four and wounding 15 others, was perpetrated by an Uzbekistan native who was reportedly refused permanent residency in Sweden due to “sympathies for extremist groups such as the Islamic State.”

No longer the ‘underdog’

Before the 1967 Six-Day War, Israel was viewed as the underdog, fending off its warring Arab neighbors. But during the ensuing 50 years, the Palestinians have successfully shifted world sympathy in their favor, and this trend has prominently taken hold in Sweden.

Cornell agrees, adding that Sweden’s Social Democratic Party has “a long tradition of being critical to Israel and sympathetic to the Palestinian side.” While Göran Persson, who led the Social Democrats and was Sweden’s prime minister from 1996-2006, was considerably more pro-Israel, the current government leadership has returned to embracing the Palestinian narrative.

Cornell explained that while “strongly anti-Israel, anti-Zionist and occasionally even anti-Semitic views” have become influential within Sweden’s left-leaning parties, there is “no counter-balance with a comparable pro-Israel mobilization on the right, even though many pro-Israel politicians exist right of the center” in the Scandinavian country.

“This combines with a strong leftist domination of media outlets, to provide a consistently negative coverage of Israel in Sweden,” he said.