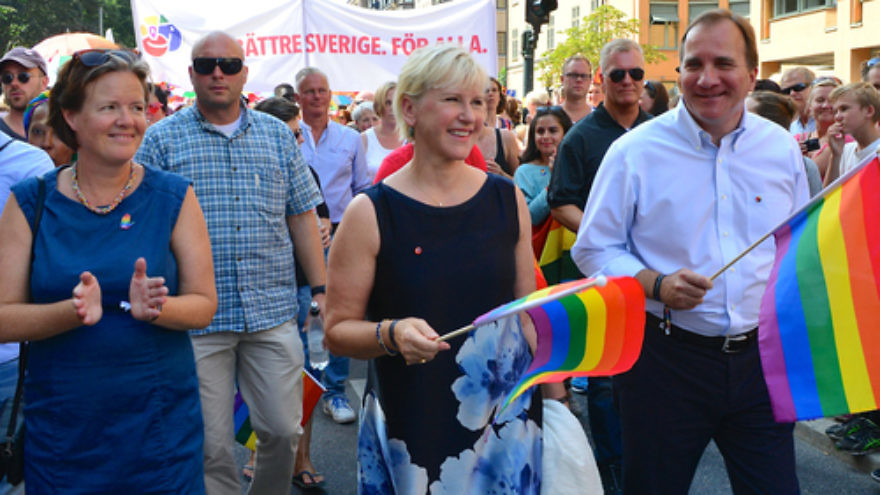 When the government of Sweden recognized a Palestinian state in 2014 and significantly increased foreign aid to the Palestinian Authority (PA), it was unclear to what extent Swedish-Israeli relations might become further strained. Swedish leaders’ recent rhetoric on Israel seems to have provided the answer—and the picture is increasingly grim.

Shortly after the Paris terror attacks in November, Swedish Foreign Minister Margot Wallstrom told the Swedish SVT2 television channel regarding the radicalization of Swedish youths fighting with the Islamic State terror group, “Of course we have cause for concern, not just in Sweden but throughout the world, because there are so many being radicalized. And once again we return to situations like that in the Middle East, especially Palestinians who think, ‘There is no future for us, we must accept a desperate situation or resort to violence.’”

Israeli Prime Minister Benjamin Netanyahu called Wallstrom’s comments “shocking for their effrontery.” Although she did not specifically mention Israel, the foreign minister’s words echoed those of the incoming Swedish government of Prime Minister Stefan Lofven last year, which in its statement recognizing a Palestinian state said that it was sending “a clear message of hope to younger generations that there is an alternative to violence.” That “clear message” was accompanied by a payout—an increase in Swedish aid to the PA from SEK 500 million (about $59 million) to SEK 1.5 billion ($176 million) over the next five years.

Following Wallstrom’s controversial linkage of the Paris attacks to Palestinian frustration, subsequent comments by the foreign minister accused Israel of “extrajudicial executions” of Palestinians, while Lofven said the ongoing Palestinian stabbing attacks in Israel are “not classified” as terrorism. Lofven, however, backtracked on his remarks.

“There has been a diplomatic rift [with Israel] since Sweden recognized the ‘State of Palestine’ after the change of government in Sweden,” Prof. Stephan Stetter, European coordinator for the Israeli European Policy Network think tank, told JNS.org.

Stetter said, “Some hope, while others fear, that the Swedish move [on Palestinian statehood] foreshadows a more widespread response [to the Israeli-Palestinian conflict] by other EU member states…and the EU as a whole.”

Magnus Norell, an adjunct scholar at the Washington Institute for Near East Policy think tank and senior policy advisor at the European Foundation for Democracy in Brussels, told JNS.org it was “no real surprise” that Sweden was the first European nation to recognize a Palestinian state because the ruling Social Democratic (led by Lofven) and Green political parties had already decided years ago that they would take that step.

Some Swedish lawmakers are pushing back against Wallstrom’s foreign policy positions. In a parliament session this month, Liberal party MP Mathias Sundin asked Wallstom why she hasn’t strongly condemned the current wave of Palestinian terrorism in Israel.

Wallstrom responded that “all acts of terror are reprehensible and must be condemned,” a principle that she said applies “to both Palestinians and Israelis who have committed the acts.”

MP Kent Ekeroth (Sweden Democrats) questioned Wallstrom on how Swedish taxpayer dollars fund the PA and its glorification of terrorism against Israelis, to which she replied that the PA provides social assistance to families of prisoners, but that no EU funding supports Palestinian prisoners in Israeli jails.

Wallstrom tried to justify the Swedish government’s stance on the Palestinians, saying that Israel’s response to Palestinian violence “results in extrajudicial executions or is disproportionate in that the number of people killed on that side exceeds the original number of deaths many times over.”

The Washington Institute’s Norell—a former analyst for the Swedish Secret Service and Swedish Military Intelligence—told JNS.org that Wallstrom’s views on proportionality are based on her particular “way of looking at the world. If more Palestinians than Israelis are getting killed, then Israel must be the bad guys.”

What Sweden’s officials miss is that there are clear reasons for the disproportionality in Israeli and Palestinian death tolls and that such numbers are misleading in a wartime situation, Norell explained. For example, during the 2014 Gaza war, he said there were higher numbers of Palestinians killed because “Israelis protect their citizens, they don’t shoot from behind a kindergarten [like Palestinians].”

“The Swedish foreign minister is suggesting that Israeli citizens should offer up their necks to murderers who would stab them with their knives,” Netanyahu told the Israeli cabinet.

In a joint statement by Wallstrom and Lofven, Sweden tried to clarify that the foreign minister did not specifically accuse Israel of “extrajudicial executions,” yet reiterated that the “Israeli response [to terrorism] must be proportionate.”

Lofven added fuel to the fire a few days later by telling the Swedish news agency TT about the wave of Palestinian stabbing attacks, “No, it is not classified as [terrorism]. There is an international classification when it is, or is not. What I know is not classified as terrorism.”

In his attempt to backtrack on those comments just hours later, Lofven said, “I was referring to the fact it is not clear whether these knife attacks have been organized by some classified terrorist organization. But organized attacks are precisely acts of terrorism.”

Further elucidating where the current Swedish leadership is coming from on the Israeli-Palestinian conflict, Norell told JNS.org that Wallstrom believes in an identity-based political outlook that is solely influenced by the idea that “this is the right thing to do, so we’ll do it,” rather than asking, “Will this be good for Sweden and foreign policy?”

Norell explained that Sweden’s Green party—which is part of a coalition government with Lofven’s Social Democrats—has fallen in line with Wallstrom’s liberal identity politics, which are “based on an old idea that Sweden is a moral superpower, [reasoning that] ‘We do things the way they should be done regardless of the consequences.’”

Additionally, Norell noted the “tradition of Social Democratic antagonism toward Israel,” which has been evident within the party since Israel became “the really bad guy” in its eyes during the 2006 Lebanon War. Going further back, the 1967 Six-Day War was a “watershed” moment in Swedish perspective towards Israel, as the Jewish state became known as the “occupier” of the Palestinians, said Norell.

Wallstrom not only sympathizes with Palestinian “frustration,” but also believes there is no alternative to working with PA President Mahmoud Abbas, who she claimed has renounced violence—albeit only in reference to the Paris terror attacks.

Norell said Wallstrom’s stance on Abbas “tells you something about the level of ignorance, and it’s based on black-and-white ideology.” On Dec. 14, Abbas called the current Palestinian terror wave a “justified popular uprising” in which Palestinians are “driven by despair that a two-state solution is not coming.” The Palestinian leader has been widely condemned by Israel for inciting violence by claiming that the Jewish state is trying to change the status quo on the Temple Mount holy site. Palestinian Media Watch, meanwhile, has long documented anti-Israel incitement by official media platforms of the PA and Fatah (Abbas’s political party).

Wallstrom has claimed Sweden “is a friend of Israel, just as Sweden is a friend of Palestine,” and that Sweden wishes to“deepen” its ties with Israel and play a role in the Israeli-Palestinian peace process. But the Swedish government’s identity politics and views on proportionality destroy “any chances Sweden might want to have in trying to be an active player in the EU to help solve the conflict, because it really gives ammunition to the people who don’t want to negotiate (the Palestinians),” said Norell.

The Israeli European Policy Network’s Stetter believes that outreach might be the key to improving future Swedish relations with Israel.