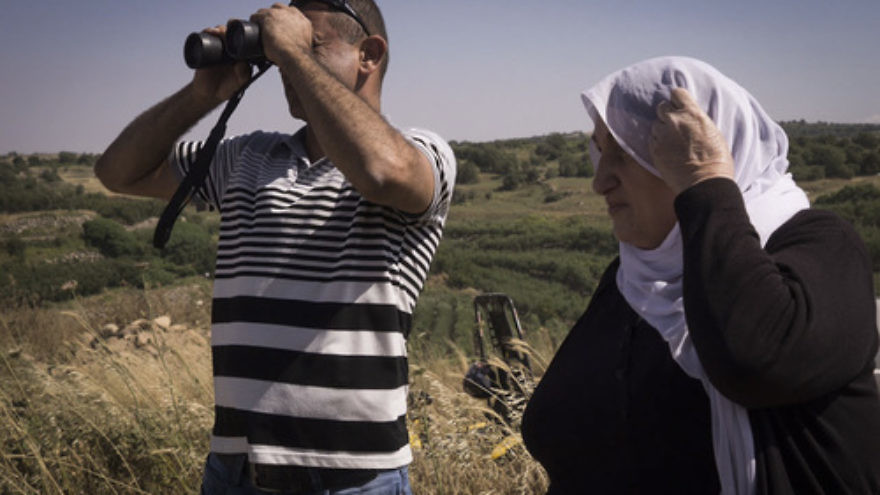 Members of the Israeli Druze community watch civil-war fighting between Syrian forces from the Israeli side of the Israel-Syria border in the Golan Heights on June 16, 2015. Druze residents of Israel have recently raised concern for the safety of their fellow Druze on the Syrian side. Photo by Basel Awidat/Flash90.
Republish this article
1283 WORDS
Spread the word.
Help JNS grow!
Share now:

(June 22, 2015 / JNS) Though it shares a border with Syria, Israel has tried to stay out of the four-year-long civil war to its north. But recent gains by rebel groups and Islamists in Syria have threatened the Druze—an ethno-religious minority mainly residing in Syria, Lebanon, and Israel—including a massacre resembling what other Mideast minorities such as Christians, Kurds, and Yazidis have faced.

As a result, there have been strong calls within Israel’s influential Druze community to intervene of the behalf of the Syrian Druze.

“I expect Israel to assist the Druze, just like it helps Jews all over the world,” Israeli Druze Member of Knesset Ayoub Kara (Likud) recently said, Bloomberg News reported.

Considered heretical by Muslims, the Druze faith is an esoteric religion that is strongly influenced by the three Abrahamic religions and Greek philosophy. It emerged in the Levant region during the Middle Ages. A majority of the 1.5 million Druze live in Syria, where they comprised around 3 percent of Syria’s pre-civil war population of 23 million. The Syrian Druze are mainly concentrated in the southern province of Sweida, where they form a majority of the population, with other Druze villages located in the Idlib province and in the Syrian portion of the Golan Heights near the Israeli border.

While the Druze are known to be very loyal to the countries in which they reside, they also maintain a strong independent identity across national borders.

The Druze have mainly avoided being drawn into the Syrian civil war, with most Druze remaining loyal to the government of Syrian President Bashar al-Assad, despite growing tensions with the government and the forming of their own Druze militias.

But that has changed over the last two months, as Syrian rebels—including members of the al-Qaeda-affiliated Jabhat al-Nusra terror group—have advanced in the neighboring province of Deraa, which lies to the west of Sweida province. At the same time, from the desert in eastern Syria, the Islamic State terror group has also pushed towards Sweida.

Concern for the Druze grew dramatically on June 11, when at least 20 Druze in the northern Syrian province of Idlib were massacred by Jabhat al-Nusra fighters. These fears have continued when rebel forces, including Jabhat al-Nusra, surrounded the Druze village of Hader in the Syrian Golan Heights, which is home to around 30,000 Druze.

“The Druze in Idlib and in the Golan/Hermon-region are in a very precarious situation and such a possibility [of massacres] exists, especially in Idlib. Here the Druze are totally at the mercy of Nusra, even though they have already twice declared their conversion to Islam,” Tobias Lang, an Austria-based political analyst and author of the book “Die Drusen in Libanon und Israel” (“The Druze in Lebanon and Israel”), told JNS.org.

As a result of their increasingly precarious situation in Syria, other Druze communities throughout the region, including in Israel, have begun calls to support their brethren in Syria from further massacres by Islamists while the Syrian government continues to falter.

Israel is home to a significant and influential Druze minority, many of whom serve in the Israeli military, police, and government. Around 110,000 Druze live in northern Israel, and an additional 20,000 live in the Golan Heights, where they have maintained deep ties with the Syrian Druze community since Israel took control of the Golan in the 1967 Six-Day War.

Many leaders in Israel’s Druze community have called on the Jewish state’s government to do more to aid Syria’s Druze.

“With the recent dynamic [of the] the massacre in Idlib, the growing Islamic State activity in eastern Sweida, the pushing of other rebels towards Sweida from the west, and the siege of the Druze town of Hader [in the Golan Heights], the Israeli Druze started to get involved on all fronts,” Lang said. “They are lobbying strongly with their own government, Jordan, and the U.S., collecting funds, and have staged impressive protests in all Druze villages in Israel.”

Atta Farhat, who heads the Druze Zionist Council, garnered headlines when he wrote to Israeli Prime Minister Netanyahu that “non-involvement in Syria will result in a Druze holocaust under our very noses, and who like Israel knows what a holocaust and genocide is.”

“[The current situation] reminds me of the early 1980s, when Israeli Druze lobbied quite successful on behalf the Lebanese Druze,” Lang said, referring to the Israeli involvement in the Lebanese civil war of that decade. “Nevertheless, I am not fully convinced that the current leadership around [MK] Ayoub Kara and [Druze spiritual leader] Sheikh Muwaffaq Tarif has the capacity to act in the same independent and rigid manner towards the government of Israel as some Druze leaders did in the 80s.”

For now, in an address to a Knesset committee on June 18, Netanyahu said that he will “do what is necessary” to help Syria’s embattled Druze community, without going into further detail about the Israeli government’s plans.

“I suggest that everyone who is dealing with the issue, who finds it important, make due with this statement for now,” Netanyahu added.

At the same time, some have called for Israel to help establish a humanitarian zone in Syria to protect the Druze refugees.

“What Israel can do is to intervene in the village of Hader, where it has direct access,” Lang told JNS.org. “Such an enterprise would put Israel into conflict with the rebels including Jabhat al-Nusra, with which Israel has found a friendly modus vivendi. I don’t think Israel wants to turn the rebels into enemies. But obviously Israel has to do something, because public pressure is enormous, maybe allowing inhabitants of Hader or other nearby villages to seek refuge and medical treatment.”

At the moment, Israel has ruled out any possibility of direct intervention in the Syrian civil war, with Israeli military officials suggesting that the Israel Defense Forces would instead provide humanitarian relief to refugees fleeing the latest violence in Syria.

But while staying away from direct fighting, Israel is set to provide $2.6 million in donations to the Syrian Druze for the purchasing of weapons and other items as they come under pressure from Islamist rebel groups.

“Israel is not a part of this fighting and doesn’t want to be, because if we say we’re going to be part of the fighting it makes it worse for our people in Syria. But me, as a Druze guy, I’m going to do what I can to support my nation. I’m very loyal to my nation,” MK Kara said in the announcement of Israel’s donation.

According to Kara, the funds were mostly raised through donations from the Israeli Druze community as well as Jews, Muslims, and Circassians who want to help protect the Syrian Druze.

During a visit to Israel by U.S. Chairman of the Joint Chiefs of Staff Gen. Martin Dempsey earlier this month, the Israeli government also for an increase in American aid to the Syrian Druze.

At the same time, Israel must also overcome decades of animosity held by the Syria Druze population towards the Jewish state.

“I can’t generalize, but Syrian Druze—as do most Syrians—consider Israel primarily as a force occupying Syrian land and not as a potential ally. However, in the current critical situation, Syrian Druze might accept help from whatever side, including Israel,” Lang told JNS.org.

While the debate on the Syrian civil war continues in Israel, the Druze are tasked with fighting to protect their community from Muslim terrorists. Lang believes they are up to the challenge.

“If the Islamists enter Druze territory and attack civilian targets en masse, I expect the Druze to respond with a high mobilization and brutal retaliation,” he said.