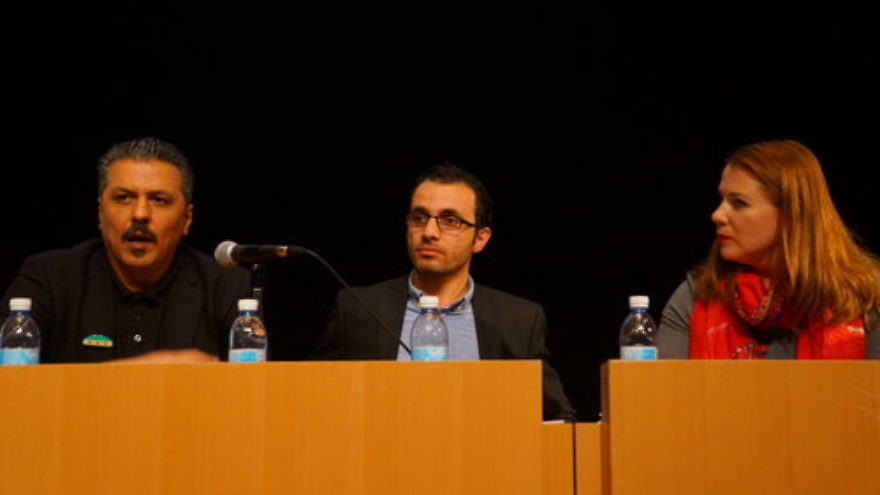 “You are living in a paradise in comparison to the Syrian people. Shame on you. We are being killed,” said Issam Zeitoun, who lives in the Syrian portion of the Golan Heights, in response to Arab-Israeli students who accused him of being a traitor because he was speaking in Israel.

Zeitoun was one of two Syrian opposition figures who addressed Israelis Jan. 17 at Hebrew University’s Harry S. Truman Research Institute for the Advancement of Peace in Jerusalem. The Syrians shared their plight and vision, and overcame an attempt to disrupt their message. A third Syrian opposition member gave remarks in a video message.

Moderated by Member of Knesset Ksenia Svetlova (Zionist Union), the event featured Sirwan Kajjo, a Syrian-Kurdish author and journalist from the city of Qamishily in northeastern Syria, where his family still resides, and Zeitoun, who is from the village of Bet Jan, which is situated minutes from the border with Israel.

Since the outbreak of the Syrian civil war about six years ago, Zeitoun has served as a liaison between rebel groups (such as the Free Syrian Army) and international players, including Israel. He maintains daily contact with rebel commanders in southern Syria.

Zeitoun’s address was interrupted by four Arab-Israeli students who were sitting in the audience and began protesting the willingness of the Syrians to visit Israel and address the public here. They heckled Zeitoun and shouted slogans against “the Israeli occupation” of the Golan Heights.

MK Svetlova attempted to restore order, telling the hecklers, “You are welcome to protest outside the event. If you wish to remain, you are welcome to do so if you are silent and let our guests to finish the session.”

Kajjo, who is a refugee living in the U.S. but regularly visits Syria illegally, is wanted by Syrian President Bashar al-Assad’s regime. He was in Syria as recently as last July, and maintains regular contact with Kurdish armed groups such as the YPG, which is on the frontline in the war against Islamic State.

Speaking to JNS.org after the event, Kajjo said he is in touch with a network of activists in the northeast Kurdish area of Syria, and that he is keen to tell the Israeli people about what is happening in his homeland.

The Kurds have succeeded in securing most of their areas and ridding them of Islamic State, he said, and are currently trying to push into the de facto Islamic State capital of Al-Raqqah. “This is important strategically, to capture Raqqah with Arab partners, and to ensure that there is no threat to the Kurdish areas,” he said. Kurdish fighters, backed by the U.S. and the international coalition against Islamic State, have been extremely effective in beating back the jihadist terror group, Kajjo said.

“This fight will only continue, because the Kurds are determined to eliminate ISIS (Islamic State). It’s true that the Kurds are Muslims, but moderate Muslims. This is a different form of Islam—completely different from what exists in other parts of Syria. It is very important to keep ISIS and its ideology out of Kurdish areas,” he stated.

The Kurdish people have a natural affinity with Israel, Kajjo said, noting that “many Iraqi Kurds have an established relationship with Israel. It’s important to understand that. There is a pro-Israel tendency among Kurds in Syria as well.”

What should Israel do about the Syrian war?

Asked about his views on Israel’s best course of action in the bloody Syrian arena, Kajjo said it is in Israel’s national interest to “make more friends in Syria.”

“Also, it’s the right thing to do in this chaotic environment,” he said. “It’s really hard to find friends in Syria—a country that for 50 years has been told that Israel is the only enemy and needs to be defeated. And now, to find people who are open to maintaining a relationship with Israel, is interesting.”

The recent victory by the Assad regime and his Iranian Shi’a backers in Aleppo spells bad news for Israel and for the region, Kajjo warned.

“Iran is expanding. Their goal is to open a highway between Tehran and Beirut,” the author said, referring to the Iranian-dominated regional crescent that is taking form. “And it’s happening, unfortunately, in Syria. The Iranian ambition is crystallizing.”

Meanwhile, Assad is calling up more Hezbollah forces from Lebanon. And more Shi’a elements continue to enter Syria from other areas, such as Iraq. The Iranian-led axis is “showing Israel that it is at your doorstep,” he said.

“Israel needs to act on the fact that this going to be existential threat to the country. Many opposition groups believe Israel needs to get involved to create safe zone in southern Syria. for its own security,” Kajjo added.

A vision for Syrian-Israeli relations

Al Masri, the chairman of National Salvation Front in Syria, is on the leadership team of the ETILAF, the main coalition of Syrian opposition groups. He offered a vision of Syrian-Israeli relations that could only be possible if moderate rebels would take control of Syria.

“Our goal is for the new Syria to be outside of any international crisis, and to focus on reconstruction and building a culture of peace,” Al Mari said.

“We drew up a road map for peace between Syria and Israel,” he said. “The new Syria will not be hostile in any way to the state of Israel, nor to any state in the region or internationally. The new Syrian state will not provide any facility for any groups or [foreign] military, nor for any acts of sabotage targeting the security and safety of Israel, or any other neighboring country. The security of Israel is necessarily linked to the departure of Assad and his regime.”