news
Newsom vetoes California ethnic-studies bill requiring anti-Israel curriculum
Jackson RichmanJNS
The governor wrote that an early version of the curriculum “was insufficiently balanced and inclusive, and needed to be substantially amended,” and that the latest proposal “still needs revision.”

newsFollowing first debate, Jewish groups slam Trump’s responses on white supremacism
“Are you willing tonight to condemn white supremacists and militia groups, and to say that they need to stand down and not add to the violence at a number of these cities, as we saw in Kenosha and as we’ve seen in Portland?” asked moderator and Fox News anchor Chris Wallace.

newsBiden compares Trump to Nazi propaganda chief Goebbels
Jackson Richman
“The president is not Hitler. Joe Biden is not Castro,” said Rabbi Abraham Cooper of the Simon Wiesenthal Center, adding that the comparison “degrades the memory of the Shoah.”
ColumnTrump, anti-Semitic? This is madness
Rabbi Yaakov Menken
The problem is the president’s deeds are not permitted to speak for themselves, and his statements are misconstrued for partisan purposes.
feature
Palestinians continue to incite terrorism and violence in school curriculum, says watchdog group
Israel KasnettJNS

brief
Report: US considers new sanctions on Iran’s financial sector
JNS
It would effectively cut it off from the worldwide financial system with an exception for humanitarian purposes.
briefSecond tanker of Iranian fuel reaches Venezuelan waters
It’s part of a group of deliveries of 820,000 barrels of gasoline and other fuels to the once oil-rich nation.
newsIran: ‘We will help any country fighting the Zionist regime and the United States’
Michael Segall JCPA
Tehran is seeking to survive the window of time before the U.S. election without giving President Donald Trump the option of taking actions against it to score points during the race.

news
Saudi Arabia uncovers terror cell trained in Iran by Revolutionary Guards
Michael SegallJCPA
The Abraham Accords, signed by the UAE and Bahrain with Israel—and encouraged by Saudi Arabia—sharpened the disputes between Tehran and Riyadh over regional hegemony.

brief
BDS co-founder warns First Abu Dhabi Bank against doing business with Israel
MEMRI
Omar Barghouthi threatens boycotts against “every company and every establishment that gets involved in implementing the agreements of shame and betrayal of the Palestinian cause.”

brief
Shin Bet to continue COVID phone surveillance for additional 21 days
Ariel Kahana and JNS Staff
Knesset Ministerial Committee on Intelligence Services discusses but fails to vote on whether to mandate that the public use an alternative Health Ministry phone-tracking app.

brief
Petition calls for action against anti-Semitism in California school district
JNS
“Children have found swastikas on their lockers, on their books, their cars in the parking lots,” said Rabbi Stacy Friedman. “These are things we’ve been hearing about the past few years.”
feature
‘Israel has the makings of a cyber superpower’
Yoav LimorIsrael Hayom

newsIsraeli Prime Minister Benjamin Netanyahu’s speech to UN General Assembly
“Here is where the next explosion could take place. This is the Beirut neighborhood of Janah. It’s right next to the international airport. And here, Hezbollah is keeping a secret arms depot.”
briefIDF reveals coordinates of ‘Hezbollah missile depots’ in Beirut
Lilach Shoval Israel Hayom
“It’s time for the world to stand up against the use of human shields by Hezbollah,” says the Israeli military.
briefHezbollah leader accuses Netanyahu of ‘inciting’ against terrorist group
Daniel Siryoti Israel Hayom
Hassan Nasrallah says Israel’s prime minister lied to the United Nations when he exposed missile stockpiles the Iranian proxy has stashed in residential areas in Beirut. 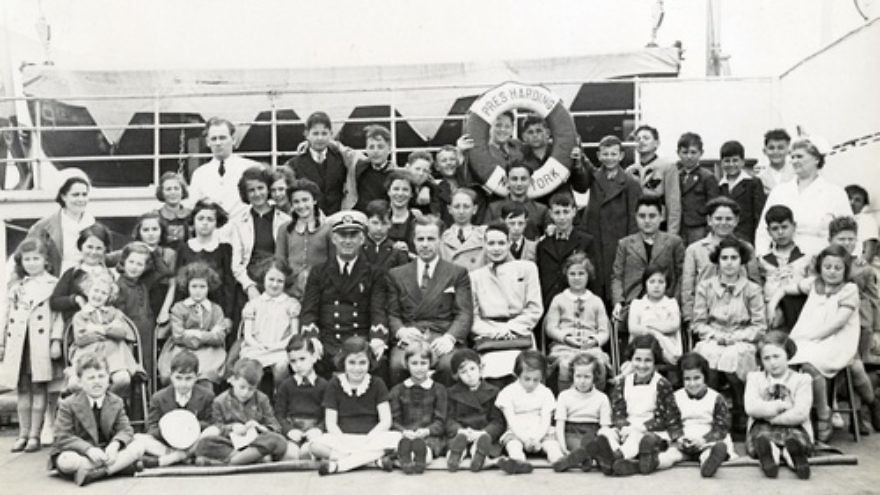 Journalist Steven Pressman first learned of the 50 children rescued by Gilbert and Eleanor Kraus in 2002 from his wife Liz Perle, the Krauses’ granddaughter, who had possession of a formerly hidden and unpublished manuscript written by Eleanor decades earlier.

That manuscript spelled out in detail the Krauses’ mission to rescue Jewish children shortly before the outbreak of World War II, launching Pressman on an extensive quest for more information that took him to Europe and to archives in Jerusalem and Washington, DC.

A first-time filmmaker, Pressman started collecting footage in 2010 and is now set to reveal the Krauses’ story in his documentary, “50 Children: The Rescue Mission of Mr. and Mrs. Kraus,” which will debut this Holocaust Remembrance Day, April 8, on HBO.

When the President Harding ship of the United States Line arrived in New York from Hamburg on June 3, 1939, among her passengers was a group of 50 unaccompanied Jewish children from Vienna, rescued from Hitler’s persecution of the Jews by the Krauses, a remarkable couple from Philadelphia.

News of pogroms against the Jews of Germany and Austria became ever-more alarming after Kristallnacht, November 9, 1938, and Gilbert Kraus felt it was necessary to do whatever he could to help bring them to safety. But American immigration laws at the time were highly restrictive, and quota limitations meant that waiting times for a U.S. visa were as long as five years. While the American Jewish community did make tepid efforts to ease these restrictions, they were not successful. Anti-Semitism was rampant in the U.S. at the time, and even many Jews did not want the immigration laws to be eased.

Gilbert Kraus (then 42 and a successful lawyer) and his wife were unwilling to stand idly by. Armed by the example of Britain, which admitted 10,000 Jewish children, they hoped to work within existing U.S. immigration laws to improve the situation. To strengthen their position, the Krauses first secured the support of the members of B’rith Shalom, a Philadelphia Jewish fraternal organization to which their family belonged, and obtained assurances of affidavits of support for a modest group of just 50 children.

Kraus was eventually referred by the U.S. State Department to the American Embassy in Berlin, where he made a personal appeal. In spite of the obvious risks faced by a Jew traveling to Nazi Germany, he left for Berlin in the spring of 1939 to meet with the Jewish leadership there and to plead with the American Charge d’Affaires, Raymond Geist. Using his lawyerly skills, Kraus argued that some U.S. visas already issued had not actually been used; some recipients went elsewhere, while others had died or were unable to travel. This line of reasoning convinced Geist, who agreed to re-issue 50 of the unused visas in favor of the “Kraus children.”

Advised by the Berlin Jewish leadership that the need was greater in Austria, Kraus immediately left for Vienna. He sent for his wife (who had to leave their two children, ages 9 and 13, behind) and also asked his friend, Dr. Robert Schless, a Philadelphia pediatrician, to join him there. In Vienna, the Jewish community invited Jewish parents to bring their children to be selected for possible immigration to America. Dr. Schless then examined each of the children assembled, and selected the top 50 that were both physically healthy and emotionally stable enough to withstand the journey as well as the stress of separation from their parents and their home.

Narrated by Alan Alda and the actress Mamie Gummer (as the voice of Eleanor Kraus), Steven Pressman’s gripping film weaves together never-before-seen archival footage as well as photographs and keepsakes of the rescued children, nine of whom share some of their experiences in the film.

One of the more remarkable aspects of the rescue is the quick and seemingly easy adjustment the children made to their new home. All of them spent several weeks in a guest house on the property of Camp B’rith Shalom in Collegeville, Pa., after which—according to Henny Wenkart, one of the 50 children—most were reunited with their parents or other family members and “scattered.”

Now 84 and a Harvard Ph.D., Wenkart recalls a night when she and her friends watched the young male and female counselors in the neighboring recreation hall “throwing one another around.” The children were not surprised—“after all, we were told America is a violent country,” Wenkart says.

It was only later that they learned the counselors were jitterbugging. Similarly, Erwin Tepper, then 7 and now a retired radiologist, remembers being served a dessert of sliced bananas and jello. Not having ever seen or tasted jello, he was convinced it was a preservative which had to be scraped off before eating!