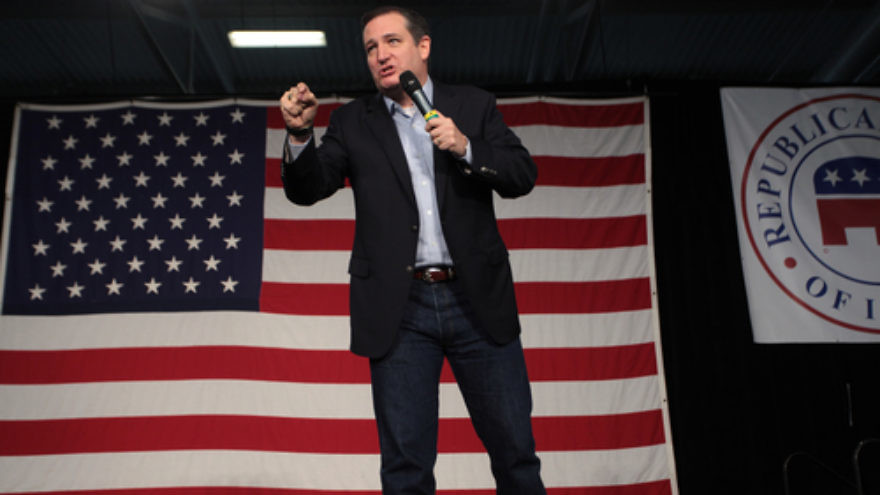 Fresh off his win in the Iowa caucus, Sen. Ted Cruz (Texas) has emerged as a top contender for the Republican presidential nomination. While pro-Israel statements have been far from uncommon among the current crop of GOP candidates, Cruz’s backers say that in both words and actions, the senator stands out from the crowd in his support for the Jewish state.

Buoyed by his principled conservative views and support among evangelical Christians, Cruz has drawn ire from many so-called “establishment” Republicans, and especially from Democrats, for his conservative positions on social issues such as gay marriage and abortion.

Cruz is also currently one of Israel’s most vocal supporters, both on the campaign trail and in Congress. Drawing support from the overwhelmingly pro-Israel evangelical Christian community as well as growing numbers of Orthodox Jews—who according to the Pew Research Center represent the fastest-growing segment of American Judaism—Cruz’s candidacy in many ways represents the future of support for Israel in the U.S.

At the same time, the American Jewish electorate is historically Democratic-leaning and socially liberal, with 69 percent of Jewish voters casting ballots for President Barack Obama in the 2012 election. But that was down from 78-percent Jewish support for Obama in 2008, hinting at Jewish voters’ possible increased prioritization of the issue of Israel amid an often-tense relationship between Obama and Israeli Prime Minister Benjamin Netanyahu. If Cruz emerges as the Republican nominee in 2016, how would Jewish voters respond to his mix of staunch conservative values and a hawkish foreign policy?

Gary Bauer—the U.S. under secretary of education for president Ronald Reagan and himself a Republican presidential candidate in 2000—told JNS.org that while “a number of the [current] Republican candidates value the U.S.-Israel alliance,” Cruz stands out for paying particularly high attention to issues prioritized by Israel and pro-Israel Americans.

Cruz “helped to lead the fight in Washington against the Iran nuclear deal,” Bauer said.

“He brought together on Capitol Hill several of the organizations that were fighting the deal and provided an umbrella for them. He regularly scheduled meetings and urged people to work together to divide up their activities. He was one of the main people behind organizing a massive rally on Capitol Hill against the deal,” said Bauer.

Bauer, who recently publicly endorsed Cruz for president, said Cruz’s work ethic contributed to his victory in Iowa and will serve the candidate well in future primaries and caucuses.

“Of all the candidates that make headlines, the real important stuff is grinding it out day to day. I think both Senator Cruz and his father (preacher Rafael Bienvenido Cruz) were methodical in speaking at church after church in Iowa and other states,” Bauer said.

Steven Mitzner, a Jewish real estate developer based in Houston and a backer of Cruz, pointed out that Cruz was the only candidate who mentioned Israel in his post-Iowa caucus speech.

“He has a love and a deep understanding of the Jewish homeland and its people,” Mitzner told JNS.org.

“More than any other candidate, he has been a leader in both strengthening military support and bringing to the forefront attacks on the Jewish population of Israel,” he said. “He is consistently urging Congress and Washington to send a clear message that we will not tolerate threats and attacks made against the Jewish homeland.”

In addition to his work on attempting to defeat the Iran nuclear deal, Cruz has repeatedly condemned Palestinian Authority President Mahmoud Abbas and his Palestine Liberation Organization (PLO) for their incitement of terrorism against Israelis. In December, a letter spearheaded by Cruz called for shuttering the PLO’s office in Washington, DC.

“It is long past time for the United States to hold the PLO and its leaders accountable for engaging in such rampant incitement, for celebrating the murder of Jews, and for providing payment to Palestinian terrorists jailed in Israel and their families,” Cruz said. “We must make it clear such actions are blatantly unacceptable and close the PLO office in Washington, DC.”

Beyond Israel, Cruz has frequently raised awareness on the persecution of Middle East Christians and has criticized the Obama administration for failing to designate that persecution as a genocide.

“Cruz has been vocal about this (the persecution of Mideast Christians) in his speeches and floor statements,” Bauer JNS.org. “I am relatively confident that a Cruz administration would make this a top priority.”

On his campaign website, Cruz proudly lists his “proven record” of support for Israel, citing his introduction of legislation to fund Israel’s missile defense systems, opposition to the European Union’s measure to remove “Made in Israel” labels from products originating beyond the 1967 lines, and co-sponsorship of legislation to have the U.S. recognize Jerusalem as Israel’s capital and move its Israeli embassy to that city.

Meanwhile, in Congress, many have criticized Cruz for his unwillingness to compromise. This extends to members of Cruz’s own party, with former Republican presidential nominee Sen. John McCain (Ariz.) once including Cruz among a group he described as “wacko birds.”

Given Cruz’s rocky relationship with some fellow Republican lawmakers, not to mention Democrats, some fear that a Cruz presidency would make it more difficult to maintain bipartisan support for Israel. Bauer, however, does not see Cruz’s principled approach in the Senate as an impediment to maintaining that bipartisan support, and believes the next president needs to speak more firmly and more often about America’s shared interests with Israel.

“Probably the most important thing that the next president can do, whether it’s Cruz or one of the others, is to use the bully pulpit to remind the American people why our interests and Israel’s interests are essentially identical,” Bauer said.

“The next president will need to explain to Americans that any change in American foreign policy away from Israel and even some of our Arab allies, and towards Iran and the mullahs, is disastrous,” he added. “A president who is able to articulate that and rally the public will cause a lot of progress on Capitol Hill.”

Rabbi Shmuley Boteach, a popular Orthodox rabbi and author, defended Cruz against the accusations of anti-Semitism, writing in an op-ed that Cruz “is a true philo-Semite, identifying deeply with the history, values, and circumstance of the Jewish people.”

“Ted Cruz is a great friend of Israel and the Jewish people and exhibits unique courage in constantly standing in Israel’s defense,” Boteach wrote.

While comprising only 10 percent of the total Jewish population, Orthodox Jews are Judaism’s fastest-growing segment and in many ways represent the future of American Judaism. Many Orthodox Jews, unlike their brethren from the Conservative and Reform denominations, tend to align with Cruz on traditional social values as well as his unflinching support for Israel.

Mitzner believes that Cruz’s comments on Trump were directed towards the special interests and liberalism in New York City, and had nothing to do with Judaism.

“I am confident that Senator Cruz meant absolutely nothing anti-Semitic with that comment,” Mitzner told JNS.org. “He has always been a friend not only to Israel, but to the Jewish people. He is very interested in constantly being a part of Jewish events and attended our family [Passover] seder a few years ago.”

As the race for president now kicks into high gear, Bauer hopes that both the Republicans and Democrats, regardless of the nominees each party produces, will push for a stronger pro-Israel policy than that of the Obama administration.

“I hope that whatever else happens in the campaign, both parties will try to outcompete each other in signaling to the new president a more pro-Israel foreign policy,” Bauer said. “But I personally think that Senator Cruz is the best bet to do that.”