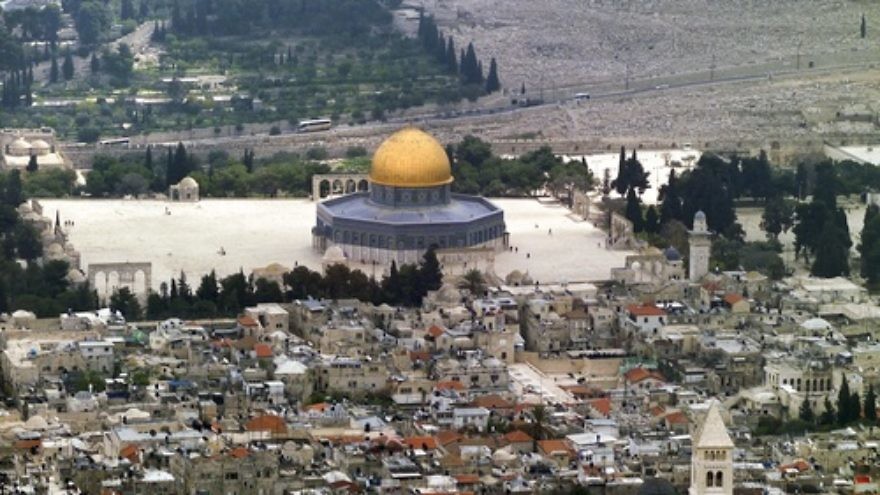 A recently revealed Israeli State Comptroller’s report that remains under a government gag order has ignited concern over the Muslim Waqf’s attempts to erase Jewish ties on the Temple Mount—Judaism’s holiest site—and Israeli authorities’ neglect of those activities.

The classified document, whose contents were published by the New York-based newspaper The Jewish Voice, details ongoing illegal excavations being carried out on the Temple Mount by the Muslim Waqf (trust) and places blame on those responsible for overseeing the site—namely the Israel Antiquities Authority, the Jerusalem Municipality, and the Israeli police. The report suggests that those Israeli bodies have been turning a blind eye to the damage caused by the Waqf pertaining to ancient Jewish archeological findings.

In response to the leak, attorney Aviad Visoly—chairman of the Joint Staff Movement of the Jewish Temple Mount Organizations, an umbrella for 27 bodies that advocate for Jewish rights on the Temple Mount—says that he has sent a letter to the state comptroller requesting an immediate removal of the gag order so that Members of Knesset can discuss its findings.

Visoly tells JNS.org that the goal of the Muslims on the Temple Mount “is to eliminate all remnants of Jewish history.” Nevertheless, he is optimistic that as a result of the report, along with a “tremendous rise” in the willingness of Jews to visit the Temple Mount, “we are on the verge of a revolution of a state of affairs in which for the first time in 2,000 years, Jews will be able to pray freely on the Temple Mount.” Visoly says that currently around 100,000 non-Muslims visit the site per year, with approximately a third of them being Jewish. Israel’s Chief Rabbinate opposes visits by Jews to the Temple Mount due to the concern that they may inadvertently step into an area that, according to halacha, is forbidden to enter unless one is ritually pure.

Yisrael Medad, the secretary of the El Har Hashem Temple Mount advocacy group and a member of the Temple Mount organizations’ coordinating council, tells JNS.org that while according to Israeli law Jewish worship on the Temple Mount is legal, there is “collusion between the government, police, and the courts, who don’t want any problems.” Police at the site forbid Jewish prayer, claiming that allowing it will cause the Muslims to riot or could even ignite another violent intifada (uprising).

Medad says that over the years, Israeli courts “have blindly accepted claims by the police that [Jewish worship] is illegal on the Temple Mount,” but that information contained in the comptroller’s report itself debunks that myth. Medad cites one instance in 1967 when Jewish prayer was temporarily banned, while the report explains in a footnote “that it appears that no general decision was made to forbid Jews from praying on the Temple Mount.”

According to Medad, the report shows “that whatever laudatory government aims are in protecting law and order, the status quo only exists for the Jews, and even worse, the Muslims are destroying archeological artifacts.”

“It’s one thing to say that the Temple Mount should be kept off the heater, but what they are actually doing is giving in on every single issue to Muslim fanaticism and destroying or not protecting anything Jewish there,” he says.

Like all Israeli governments since 1967, the current government “doesn’t want to give the Jews any rights on the Temple Mount other than free access to the site,” says Medad. Israeli authorities “haven’t done the minimum to protect Jewish history, archeology, and construction, which [by doing so] doesn’t have to ignite World War III,” he adds.

Yitzchak Reuven—assistant-director of the International Department at The Temple Institute, an educational, not-for-profit organization which focuses on the universal significance of the Holy Temple as a house of peace and prayer for all nations—tells JNS.org that he believes the comptroller’s document proves that Prime Minister Benjamin Netanyahu has in effect given the Israeli police full authority on the site to act on behalf of the Jerusalem Municipality, the body which is supposed to approve all construction in the city, and on behalf of the Israel Antiquities Authority, which is tasked with maintaining a presence at all sites relating to historical archeological digs.

Reuven expresses grave concern in regard to extensive construction work currently being carried out by the Waqf “without supervision or authorization.” He says that the police “never say no the Muslim Waqf [for carrying out their projects], but always give them the green light.” Regarding the 1994 peace agreement between Israel and Jordan, which was supposed to ensure freedom of worship for all monotheistic faiths on the Temple Mount, Reuven says that “Jordan and [the Jordanian] Waqf have essentially reneged on the agreement, but nobody says anything about it.”

Israel has “willfully not exercising sovereignty over Temple Mount, thus creating a vacuum which the Waqf has filled,” claims Reuven. As a result, he says that Jews who ascend to visit the site are often screamed at and intimidated by Muslims who are hired and compensated by Raed Salah, the leader of the Northern branch of the Islamic Movement in Israel, to sit on the Temple Mount for the purpose of disrupting visits by Jews as well as other non-Muslims.

“If the Muslims decided to cause a scene, the police [won’t stop them but] will remove the Jews from the area, since the Jews represent a path of least resistance. In light of the report, it seems incontrovertible that the police are getting specific instructions from their superiors and ultimately from the Prime Minister’s office that their jobs will be on the line, if they screw up [and there are disturbances],” Reuven says.

“The Temple Mount is used as an alarm by the Muslims to terrify a lot of people by saying that the Muslim world will rise up anytime a Jew moves a stone [at the site],” adds Reuven. “Israel has educated its own people to replace the importance and yearning of the Temple Mount with the Western Wall.”