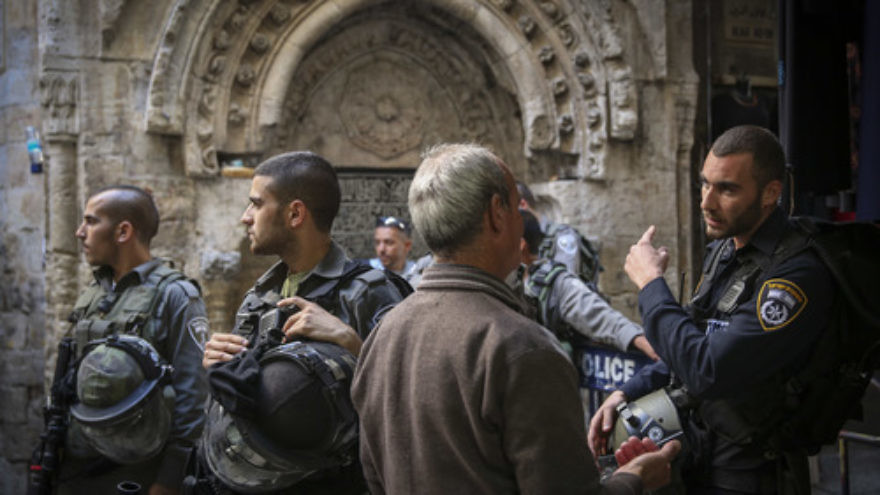 After the latest Islamic riots on the Temple Mount, Israeli Public Security Minister Yitzhak Aharonovitch warned that further disturbances will prompt Muslims to be prohibited from entering the compound. Muslim violence at the Temple Mount has reached a boiling point over routine Jewish visits to the holy site during the holiday of Sukkot.

In a policy change since the beginning of the Jewish New Year, instead of closing the Temple Mount to visitors after Muslim rioting, the Israel Police pushes the rioters back inside the Al-Aqsa mosque and leaves the Temple Mount compound open. But the policy may change again if the current situation persists, Aharonovitch said.

Aharonovitch’s comments followed another tumultuous morning at the Temple Mount on Monday. Overnight Sunday, dozens of youths—among them members of Hamas and the northern branch of the Islamic Movement in Israel—congregated for a riot, amassing rocks, firecrackers, and Molotov cocktails inside the Al-Aqsa mosque in order to clash with police and disrupt the holiday routine for Jewish visitors to the Temple Mount.

Additionally, the youths also built improvised barricades to prevent police from locking them in the mosque, nailing shoe racks to the doors. They erected wooden obstacles inside of the mosque, planning to throw rocks and shoot fireworks at the police from behind the obstacles.

After learning of the riot plans, the Jerusalem District police department prepared to foil the riot. Immediately following early morning prayers, a police force entered the Temple Mount compound to surprise the youths, who barricaded themselves behind the improvised obstacles and hurled rocks and firecrackers at the officers.

The police officers repelled the attackers with anti-riot equipment, removed the barricades, and locked the mosque’s doors with the masked rioters inside. Later in the day, police arrested four Arab youths suspected of involvement in the Temple Mount violence.

Locking the rioters inside the mosque allowed the police to keep the Temple Mount open to more than 900 visitors to the site.

Aharonovitch visited the Western Wall on Monday and addressed the situation.

“We will not permit disturbances on the Temple Mount, or rocks to be thrown at Jewish homes, or gravestones to be smashed on the Mount of Olives,” he said.

“It is not that Israel is in any way changing the status quo [on the Temple Mount],” Netanyahu said. “We’re not. I’m committed, and Israel is committed, to maintaining the status quo exactly as it’s been for many decades. What we’re seeing are Palestinian extremists who are instigating violence through incitement. The incitement is spread by false and baseless rumors that we are threatening the Muslim holy places.”

Netanyahu said Israel “scrupulously maintains the protection of the [Muslim] holy sites, the right of all religions to worship in their holy places, and will continue to do so, maintaining order, maintaining freedom of worship.”

“That freedom was actually guaranteed only after Israel reunified the city of Jerusalem in 1967. And in fact Israel is the only country in the Middle East that fully, unstintingly, continuously, and constantly protects the freedom of worship and the access to the holy sites of worship,” he said.

Knesset Interior Committee Chairwoman MK Miri Regev (Likud) said Monday, “Years of ineffective action by the police in the face of Muslim rioters on the Temple Mount have led to a situation where Muslims don’t have to account to anybody.”

“The reality in which Muslims intentionally attack police officers and use violence to keep Jews from visiting the Temple Mount is the result of police laxity in dealing with the radical rioters,” said Regev.

Deputy Knesset Speaker MK Moshe Feiglin (Likud) said, “Hamas and the Islamic State have seized the Temple Mount. The prime minister’s statements about a victory over Hamas and sending a message of deterrence to Hezbollah are being smashed on the rock of reality at the Temple Mount.”

At the beginning of September, the Jerusalem police established a task force to counter the light rail attacks, which have taken place on a daily basis.

“We appreciate the work of the police, which we are seeing more of recently, but we can’t report any improvement in the number of rock-throwing incidents,” a CityPass official said.