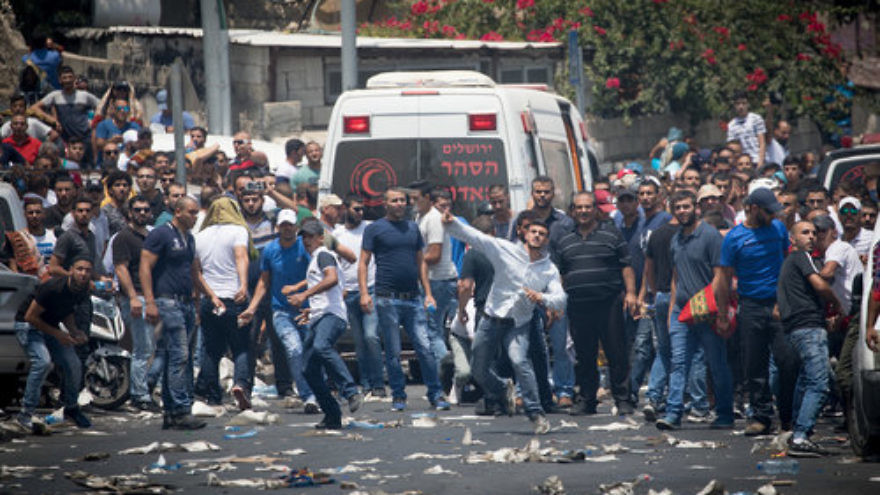 To an objective observer, the crisis that erupted in the aftermath of a bloody terror attack near Jerusalem’s Temple Mount makes no sense.

Three Arab terrorists used guns they had smuggled up to the compound July 14 to kill two Israeli policemen, both of whom happened to be Druze rather than Jewish. In response, Israeli authorities set up metal detectors to prevent a recurrence of the crime. The response to this from Palestinians was general outrage, terror—including last Friday’s killing of three Israeli family members in Halamish—and mass riots if the offending machines were not immediately removed. Ultimately, Israel decided Monday to discard the metal detectors in favor of “security measures based on advanced technologies.”

How could putting metal detectors to protect a holy site be considered a casus belli for what might, if the conflict escalated in the way the Muslim rioters promised, lead to a new holy war?

The answer is that this isn’t about metal detectors. It’s about something much bigger: the right of Jews to be in Jerusalem.

This isn’t another variation on the usual theme sounded from Israel’s critics about the infringement of Palestinian rights. To the contrary, Israel didn’t change the status quo at the Temple Mount, which denies Jews the right to pray at the holiest place in Judaism. The Islamic Waqf was left in charge of Jerusalem’s mosques, including the Temple Mount’s Al-Aqsa, inviolate.

Nor was the new security measure discriminatory. Any Jew or non-Jew who wishes to enter the Western Wall plaza below the Temple Mount compound must also pass through security, including metal detectors. The same is true for Muslims who wish to enter the holy places in Mecca during their annual pilgrimages.

So what exactly is this all about?

For a century, Palestinian Arab leaders have been playing the “Al-Aqsa is in danger” card. The cries that Jews were seeking to destroy the mosques or in some way harm Muslim rights led to a series of pogroms against Jews, including the riots of 1929 in which Jews were massacred in Hebron. But the appeal to holy war isn’t only a vestige of the horrors of the distant past and the influence of the Nazi sympathizer Haj Amin al-Husseini, the mufti of Jerusalem who incited those riots.

It was the supposedly moderate Mahmoud Abbas, president of the Palestinian Authority (PA), whose inflammatory statements helped incite the so-called “stabbing intifada” in recent years by also claiming Jews were going to harm the mosques. It was Abbas, not just his Hamas rivals or other violent Islamists, who called on Palestinians to resist the Jewish presence in Jerusalem. It was Abbas who said “stinking Jewish feet” should not profane the holy places.

Abbas’s motives were cynical, since he was waving the bloody banner of holy war to compete with his political foes. But the impact of his statements gave the lie to the notion—so prevalent on the Jewish left—that a peace agreement could be easily reached if Israel had the will to try for one. His rhetoric sought to remind Palestinians that the conflict wasn’t over borders or settlements, but something far more basic: a religious war that mandates Arab opposition to the Jewish presence.

This is why the PA goes to such trouble to foment fights at United Nations agencies like UNESCO intended to deny Jewish ties or rights to holy places, even those that are self-evidently proof of Jewish history like the Temple Mount and the Western Wall.

This is also why the now-removed metal detectors were merely the latest pretext for Arab violence intended to make the point that Jews should not merely have no say over the Temple Mount, but have no right to be there at all.

The riots and terror attacks were just one more power play intended to remind the world that the only solution Palestinians will ultimately accept is one in which the Jews are excluded. So long as this is their goal, it isn’t Al-Aqsa that is in danger, but any hope for peace.

Jonathan S. Tobin is opinion editor of JNS.org and a contributing writer for National Review. Follow him on Twitter at: @jonathans_tobin.