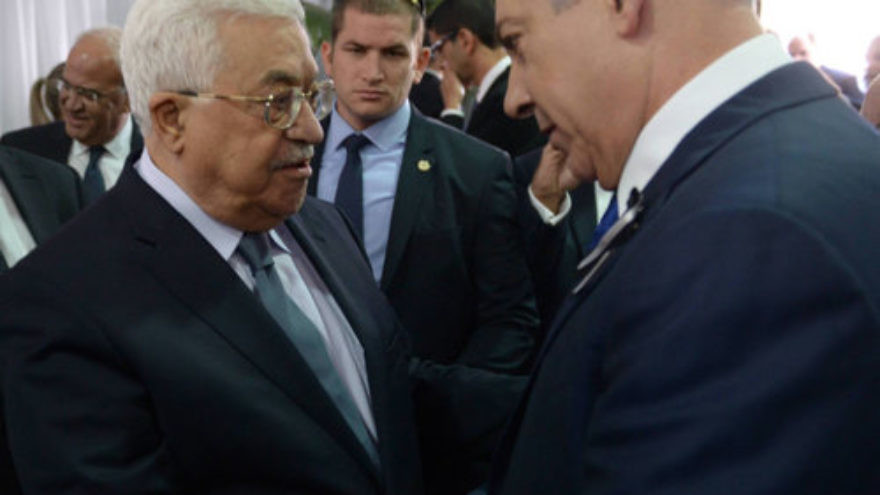 (October 6, 2016 / JNS) Palestinian leader Mahmoud Abbas suffered chest pains this week and was rushed to a hospital in Ramallah. The episode was an important reminder of the dangers and risks Israel will face if it heeds demands for the quick creation of a Palestinian state.

In recent weeks, the S. Daniel Abraham Center has been sponsoring full-page ads in The New York Times calling for a Palestinian state. The Obama administration this week issued an overheated condemnation of Israel for approving the construction of a handful of houses for Jews, because that construction might interfere with the emergence of a Palestinian state. And there have been reports that the United Nations, perhaps with the support of President Obama, will soon issue some new Palestinian statehood resolution.

Abbas is 81-years-old. His recent heart episode illustrated the fragility of his health. And, at his age, if it’s not his heart, it will soon be something else. One of these days, and it won’t be long, he will no longer be physically able to govern the Palestinian Authority (PA).

So, let’s imagine for a moment if Israel were to listen to Obama, the U.N. and S. Daniel Abraham and permit the creation of a fully sovereign Palestinian state. And then imagine if, shortly after signing a statehood agreement with Israel, Abbas is incapacitated. What would follow?

There are, I think, two possibilities.

The most likely scenario is that the terror group Hamas would take over. It has the troops and weapons needed for a coup. They already defeated Abbas’s Fatah forces and took over Gaza nine years ago. And Hamas has widespread support among ordinary Palestinians judging from the results of the few elections that Abbas had permitted over the years.

So Hamas, which openly advocates the annihilation of Israel and the genocide of Israel’s 6.4 million Jews, would be in control of a full-fledged state with borders straddling Jerusalem and Tel Aviv.

The new Hamas regime could bring in tanks and planes, not to mention missiles from North Korea and “volunteers” from Iran. A lone Hamas terrorist with a shoulder-fired rocket would be within striking distance of planes taking off from Tel Aviv’s Ben Gurion Airport. Perhaps after he brought down a plane or two, the U.N. would pass a resolution expressing concern about “the escalation of Israeli-Palestinian violence.”

The other scenario would involve some non-Hamas official from the PA succeeding Abbas. Now, if Abbas had spent the past 23 years since the signing of the Oslo Accords educating the Palestinian public to embrace peace, perhaps there would be a chance of a peace-minded leader emerging to succeed him.

But instead, PA schools became anti-Israel indoctrinating centers, PA summer camps were used for teenage military training, and the official PA news media saturated Palestinian society with glorification of terrorists as “heroes” and “martyrs.” PA cartoonists drew images of Jews that rivaled those of the worst anti-Semites through the ages. Then-Senator Hillary Clinton called the PA’s anti-Jewish education “child abuse.”

One can understand why the Obama administration, the S. Daniel Abraham Center, and J Street have in effect adopted “Quick, give him a state!” as their motto. If Abbas doesn’t get a state right away, he may not be around to get it at all. And then Israelis (and American Jews) would see, once and for all, how foolhardy it would be to put Israel’s fate in the hands of unstable Palestinian dictators.
Stephen M. Flatow, an attorney in New Jersey, is the father of Alisa Flatow, who was murdered in an Iranian-sponsored Palestinian terrorist attack in 1995.