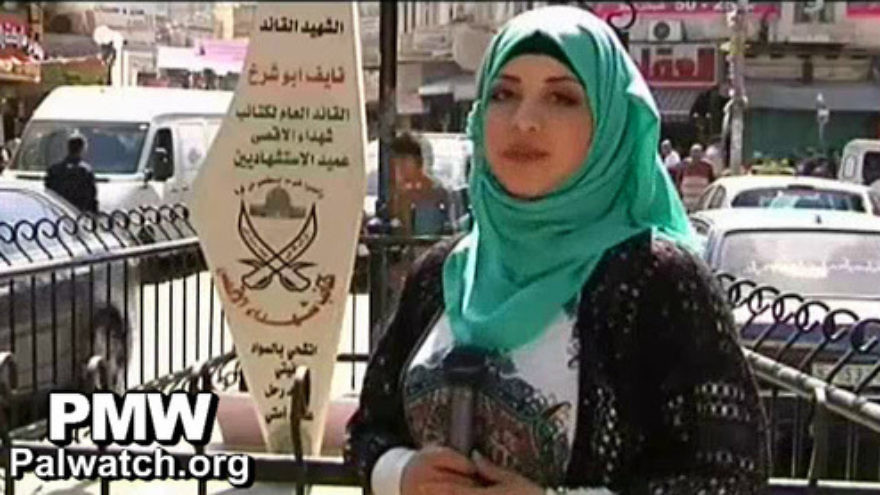 The mother of Palestinian terrorist Naif Abu Sharakh is pictured next to a new monument in a Nablus city square that was renamed after her son. Credit: Palestinian Media Watch.
Republish this article
855 WORDS
Spread the word.
Help JNS grow!
Share now:

In the city of Nablus, known to Israelis as Shechem, a city square was last week renamed in honor of a terrorist named Naif Abu Sharakh. The monument placed at the site is in the shape of the map of “Palestine,” including all of the State of Israel. Not just the “occupied territories.” All of Israel. The inscription on the monument reads: “Martyr leader, Naif Abu Sharakh, commander of the Al-Aqsa Martyrs’ Brigades, leader of the Martyrdom-seekers.”

In conjunction with the square-naming, the Palestinian television station Awdah sent a crew to visit Abu Sharakh’s mother. Here’s how they introduced her: “Mother of Martyr Naif Abu Sharakh gave both her sons for the land and the homeland. Let’s meet her. We are very happy to meet you and very proud of you. A Palestinian mother such as yourself, whom we are proud of, you have given two of your sons for the homeland.” (Translations courtesy of Palestinian Media Watch.)

Nablus is the largest Arab city in the Judea and Samaria territories. Former Israeli prime minister Yitzhak Rabin surrendered it to the PA in 1995, along with all the other major Arab-populated areas, so that 98 percent of the Palestinians live under the PA. That was when Israel stopped “occupying” the Palestinians, although the world prefers to ignore that fact.

According to the Oslo accords, the PA is obligated to disarm and arrest all terrorists in the areas it controls. And in view of the fact that the PA has one of the largest per-capita security forces in the world, there shouldn’t be any terrorists operating in Nablus. But there are. Because the PA shelters them instead of jailing them.

That’s why on June 27, 2004, Israeli forces were compelled to enter Nablus. Making their way through the dangerous Nablus kasbah—which the Israeli government described as “a terrorist command center”—the Israeli soldiers encountered two armed terrorists inside a house. One was killed, one escaped into a hideout under the house. In a subsequent battle, seven terrorists in the hideout were killed.

One of the seven turned out to be Naif Abu Sharakh, local commander of the Al-Aqsa Martyrs Brigade. That’s the terrorist arm of Fatah, which is the largest faction of the Palestine Liberation Organization. PA President Mahmoud Abbas is also the chairman of Fatah. These are supposed to be the “moderates,” the “peace-seekers.” They signed the Oslo Accords. They’re not supposed to have a terrorist arm.

Abu Sharakh, who previously served in the PA’s General Intelligence division, was responsible for numerous terrorist attacks, including a 2003 suicide bombing in Tel Aviv in which 23 civilians were murdered and dozens more injured, and a suicide attack in 2002 in which two Israelis were killed and 30 wounded.

Abu Sharakh also orchestrated numerous attacks against Palestinian Arab rivals. For example, he sent one of his deputies to assassinate the mayor of Nablus in November 2003. (The killer accidentally killed the mayor’s brother instead.) Intra-Palestinian violence is an important feature of Palestinian society, but is almost never reported in the Western media, presumably because it reminds people how dangerous an independent Palestinian state would be.

By the way, two of the other terrorists killed in the hideout with Abu Sharakh were Jaffer Mitsri, a local Hamas leader, and Faddy Bahti, a commander of Islamic Jihad. Pundits and Obama administration officials like to portray the “moderate” Fatah and PA as being at war with the “extremist” Islamists of Hamas and Islamic Jihad. Evidently, the three factions have more in common than some in the West would care to admit. Because there they were, the local leaders of Fatah’s Al-Aqsa brigade, Hamas, and Islamic Jihad, all sharing a Nablus hideout and undoubtedly sharing resources in their war against the Jews.

How did the PA respond to the death of Abu Sharakh and his fellow-mass murderers? If the PA is against terrorism—as its American friends always claim—then surely it should not have been shedding any tears over the demise of these killers. In fact, the PA should have been thanking the Israeli forces for doing the job that the PA was supposed to do.

Instead, however, PA Prime Minister Ahmed Qureia denounced Israel for committing “a brutal and ugly crime.” And now the PA has dedicated a square to the memory of the “martyr” Abu Sharakh. And Awdah TV, which is the official television station of Mahmoud Abbas’s Fatah, is glorifying Abu Sharakh.

The international community’s response to all of this? Silence. Not a peep out of the U.S. State Department, the United Nations Security Council, or the major news media. They treat the PA’s open support for terrorism as a perfectly reasonable, acceptable mode of behavior. It seems as if Palestinian support for terrorism has become the new normal.