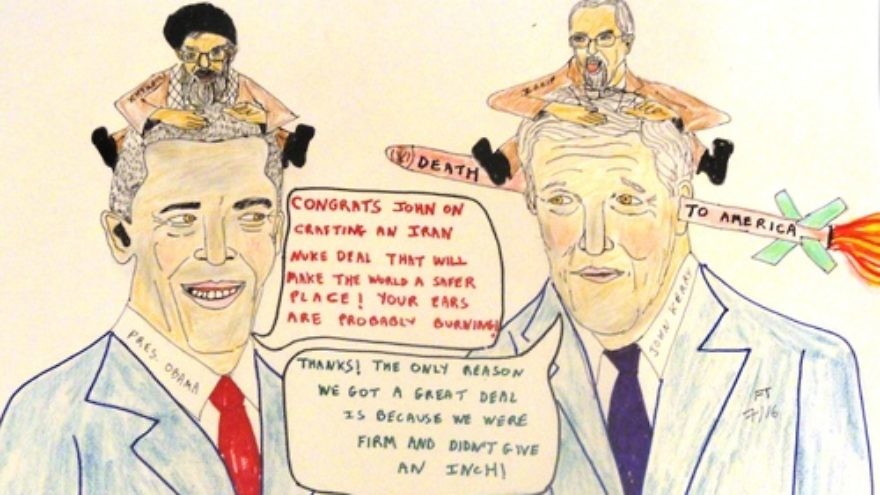 In the early hours of the morning on July 13, before leaving for the airport back from Modi’in, Israel, my husband and I gently tiptoed into our granddaughter’s room to steal one last look at her, tranquilly sleeping in her crib. Her little chest was rising and falling with each breath, so peaceful and so totally oblivious to the imploding chaos of the surrounding Middle East and the encroaching fate that seems to be descending upon the tiny Jewish state, which her parents have proudly made their home.

By the morning of July 14, we had arrived back in the States and had awakened to the news out of Vienna, triumphantly relayed by Secretary of State John Kerry, that the nuclear negotiations with Iran had finally concluded.

I immediately started to slog through the dense legalese of the 159-page Joint Comprehensive Plan of Action (JCPOA) document and, with the image of my beautiful 8-month-old grand-daughter still fresh in my mind, got progressively disheartened with each page.

What happened to all of President Barack Obama’s repeated promises to a skeptical American public?

We have been assured time after time by this president that Iran “must not get a nuclear weapon.” But according to the JCPOA, the Iranians will be granted complete permission from the international community to produce nuclear weapons. They only have to wait out 15 years. Fifteen years? What is 15 years in the life of a nation? Or even the life of a person? To put it into perspective, my granddaughter will merely be in her adolescence by then.

And that is under the assumption that they will not cheat.

At that point, they will be able to produce at least one bomb, within anywhere from a matter of days to a few months. By the eighth year, Iran’s old centrifuges will be replaced by modern, advanced centrifuges, capable of enriching weapons-grade uranium at a much greater rate.

We were repeatedly assured by the Obama administration that Iran must fully explain its past possible military dimensions. Yet the deal does not lay out any consequences for not doing so.

We were told repeatedly that there will be “anytime/anywhere inspections.” In the proposed deal, requests for inspections must be dealt with by a committee—on which Iran sits—and then the procedure could be a complicated, lengthy process, requiring up to 24 days before entering the site (certainly ample time to clean it up).

We were told that sanctions would be lifted gradually, commensurate with Iran’s commitments. Now we learn that Iran will be getting a windfall of $150 billion. We have no idea how many of those billions will be funneled to Hamas and Hezbollah, but even if it is simply a fraction of that amount, those terrorist groups and others backed by Iran could do a tremendous amount of damage with those funds.

When asked about this in a press conference, Obama said, “I think that’s a great question and I’m glad you brought it up. I think it is a mistake to characterize our belief that they will just spend it on daycare centers, and roads, and paying down debt. We think that they have to do some of that, because [Iranian President Hassan] Rouhani was elected specifically on the premise of improving the economic situation inside of Iran. That economy has tanked since we imposed sanctions.”

In other words, they think some of the money will go for domestic reasons. Where do they think the rest of it will go? And why is that apparently okay with the American government?

There were additional sweeteners apparently thrown in at the last minute. The Central Bank of Iran, the major vehicle for money laundering to terrorist groups, will be relieved of all economic sanctions, as will Qasem Solemeini, known as the “shadow commander” or commander general of the Al Quds Force, who is personally responsible for many of Hezbollah’s most notorious activities.

And perhaps the most egregious aspect of this all, deeply buried in Annex III, Article 10 of the JCPOA, is a clause saying that world powers and Iran will foster “cooperation through training and workshops to strengthen Iran’s ability to protect against, and respond to, nuclear security threats, including sabotage, as well as to enable effective and sustainable nuclear security and physical protection systems.”

It is nothing short of morally reprehensible that the international community should be collaborating in the protection of the Iranian nuclear project. Many had speculated last year that the Americans, together with the Israelis, had worked together to keep the world a safer place by implanting viruses such as Stuxnet. Is it conceivable that we will be helping to safeguard the Iranians from the kind of non-military intervention that would protect us and our allies from nuclear annihilation?

This is not negotiation. This is appeasement, bordering on capitulation, bordering on treason. The word that comes to mind is “betrayal.”

Nothing in this deal says the Iranians should end their support of terrorism, nor bring home the hostages languishing in their notorious Evan prison.

On July 18, at a rally in Tehran, Iranian Supreme Leader Ayatollah Ali Khamenei vowed, “Even after this deal, our policy toward the arrogant U.S. will not change.”

As Winston Churchill had said, “You were given the choice between war and dishonor. You chose dishonor, and you will have war.”

Sarah N. Stern is founder and president of the Endowment for Middle East Truth, an unabashedly pro-Israel and pro-American think tank and policy institute in Washington, DC.