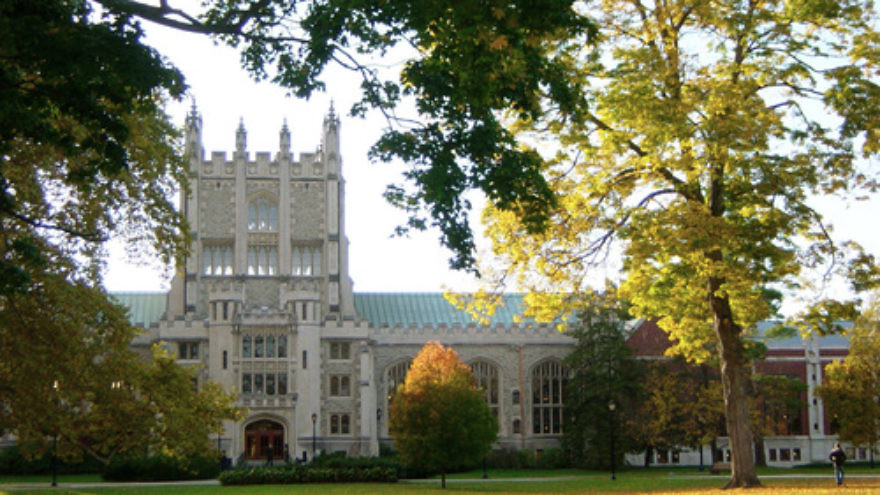 “Vile at Vassar,” exclaims an editorial in the New York Daily News. “Anti-Semitic Times at Vassar,” notes a Vassar graduate at the Daily Kos. “Anti-Israel Jews and the Vassar Blues,” pens an op-ed writer in the Wall Street Journal. Jonathan Marks in Commentary magazine asks, “What’s going on at Vassar?”

Jewish students at Poughkeepsie, N.Y.-based Vassar College, responding to a 2015 questionnaire, said that at Vassar, it’s unwise to advertise that you are Jewish because it will threaten a student’s sense of safety. Jewish students self-censor pro-Israel opinions out of fear of retribution from intolerant peers and professors. At Vassar, voicing a pro-Israel view brands you a fascist, a racist, a colonialist, and morally compromised. The intolerant atmosphere suppresses freedom of expression, constructive debate is impossible, and conformity to an anti-Israel orthodoxy is demanded.

Unfortunately, at Vassar, criticism of Israel often crosses the line into anti-Semitism.

Although there is zero tolerance for racist, homophobic, or sexist hate speech or activity on campus, Vassar tolerates anti-Semitic hate speech.

I’m not talking about legitimate criticism of Israel, its policies, and its government. According to the U.S. State Department, criticism becomes anti-Semitic when it satisfies one or more of the following: It demonizes Israel (calling it “apartheid,” “Nazi,” or “the worst human rights abuser in the world,” or exaggerating Israel’s actions out of all sensible proportion); it delegitimizes Israel (claiming that it has no right to exist as the nation-state of the Jewish people); it holds Israel to a double standard of behavior, a standard higher than for any other nation (singling out Israel in the United Nations for human rights abuses while ignoring China, Iran, Cuba, and Syria or accusing Israel of mass killing of civilians in Gaza while ignoring Hamas’s use of human shields). Historically, anti-Semitism was directed at individual Jews. Today, it is directed toward the Jewish state.

There are numerous examples of anti-Semitism at Vassar College, often promoted by Vassar’s academic departments. Here are just a few:

While Vassar academic departments would never sponsor a Ku Klux Klansman, an anti-gay marriage spokesperson, or pro-lifer, Vassar’s Religion, Political Science, Sociology, English, and Geography departments, as well as its International Studies and Jewish Studies programs, found it perfectly acceptable to co-sponsor a lecture in 2014 by known anti-Semites Max Blumenthal and Ali Abunimah. At Vassar, Blumenthal and Abunimah demonized Jewish Israelis as Nazis and, among other things, called Israel the most militaristic nation on earth. They advocated the ethnic cleansing of Jews from the Middle East and exhorted students to rise up against Zionists. These same anti-Semitic rants caused Blumenthal to be banned from speaking at the German parliament later that year.

In 2014, 39 Vassar faculty members, in a public letter supporting the boycott of Israeli academic institutions, demonized Israel as an “apartheid” and “oppressor” state, and justified the boycott of Israeli academics by claiming that Israel today is the equivalent of apartheid South Africa in the 1980s. No Vassar faculty members stood up to oppose this defamation or the suggested boycott.

In the spring of 2014, one of the 39 professors and at the time the director of Vassar’s Jewish Studies program, avowed anti-Zionist Joshua Schreier, in a workshop on the “Origins of Zionism,” delegitimized the Israeli nation-state, asserting that Jews lack any historical connection to present-day Israel and stole the land from the indigenous Arabs.

In March 2015, Jewish Studies and five other academic departments and programs co-sponsored a lecture by Sa’ed Atshan, who delegitimized and demonized Israel by advocating for the elimination of the “apartheid” Jewish state and its replacement with yet another Arab state.

In April 2015, the Vassar student government, the Africana Studies program, and the Geography department co-sponsored an event featuring Rebecca Vilkomerson, executive director of the anti-Israel group Jewish Voice for Peace, and Hind Awwad, Palestinian coordinator of the Palestinian BDS National Committee (referring to the Boycott, Divestment, and Sanctions movement). Both advocated that Vassar should support BDS, an anti-Semitic movement that demonizes and delegitimizes Israel with the intent of destroying the only Jewish homeland. They labeled Israel “apartheid,” delegitimized Israel’s right to exist by promoting the Palestinian right of return that would transform Israel into a Muslim-majority state, and called Israel’s founding a “crime.”

In September 2015, Angela Davis—invited by the Vassar president, the faculty dean, and multiple academic departments to speak on campus to commemorate the Women’s Studies program’s 30th anniversary—equated Israel’s treatment of Palestinians to the Holocaust.

When Vassar and its faculty promote these anti-Semitic voices, they legitimize anti-Semitic positions in the eyes of students. Intellectual debate and free speech are stifled and a supporter of Israel is seen as advocating for a totally evil entity.

A 2015 study by two Trinity College professors found that 54 percent of Jewish college students are subjected to or have witnessed acts of anti-Semitism at their campuses. Therefore, the fact that there is anti-Semitism on the Vassar campus is not terribly surprising. But unlike the situation at most other schools, the environment for Jewish students at Vassar is much more difficult because there is no diversity of narrative about Israel.

Opinions at Vassar regarding Israel, inside and outside the classroom, range from characterizing Israel as an irredeemably evil nation that must be eliminated to acknowledging that its many alleged evils may have the potential for repair.

There are no faculty or administrators speaking up publicly in defense of the Jewish state, none opposing the departmental sponsorship of anti-Semitic speakers, none serving as role models to support pro-Israel students. Given the all-pervasive antipathy towards Israel, faculty who hold the power of grades, and peers who quickly and publicly ostracize those who support the Jewish nation-state, Jewish students—and others who speak out in support of Israel—are harassed, bullied, isolated, and silenced.

In the humanities and social sciences, many Vassar courses focus on victimhood, anti-colonialism, and social justice. Israel is described as a white colonizer and human rights abuser within an Arab-Muslim region, while Palestinians are viewed as noble people of color, oppressed victims in no way responsible for their fate.

In his class on the roots of the Israeli-Palestinian conflict, Schreier—the former Jewish Studies director—has stated that this class is not an “objective” account of a “two-sided” conflict. He’s quite correct. His course is political propaganda against the Jewish state masquerading as history.

In an August 2015 article in JNS.org, Vassar junior Jason Storch commented about Vassar that there have “been a lot of terrible things said about Jews and Israel.” Vassar alumni have brought this problem to the attention of the Vassar administration and faculty, urging them to foster a more diverse narrative about Israel and to exercise zero tolerance for anti-Semitic speech, but the administration has refused to acknowledge the problem. Doesn’t Vassar realize that the integrity of the college is at risk?

Ziva Dahl is a Vassar College alumna and a retired financial investment advisor with an MA in public law and government from Columbia University. She writes and lectures about U.S.-Israel relations, U.S. foreign policy, Israel, Zionism, anti-Semitism, and BDS on college campuses.