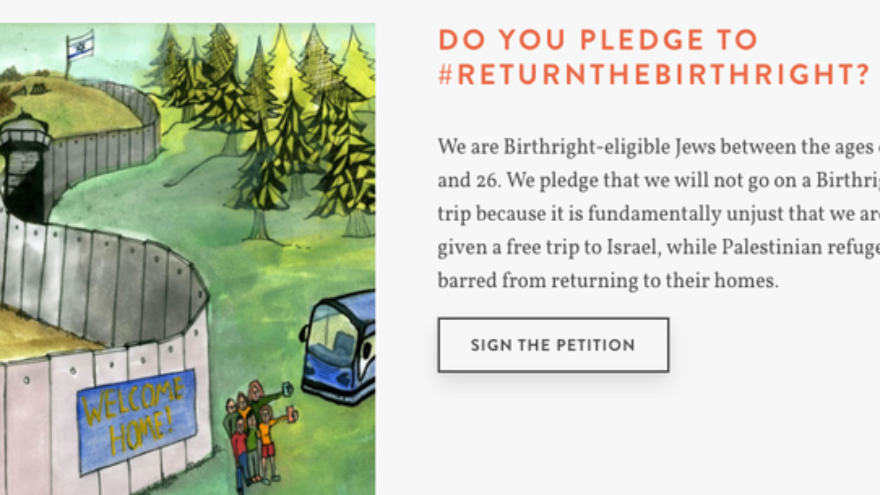 Most Jews look on the fragment of our community that hates Israel and Zionism with a mixture of disdain, irritation and puzzlement. Despite data indicating that a split between American Jewry and Israel is deepening, the organized Jewish world has yet to seriously and effectively address the problem.

Now, that fragment has decided to attack Birthright, the largest educational organization in the world, for offering free trips to Israel to young Jewish adults from ages of 18-26. It would be a good time finally to get serious about a response.

The campaign against Birthright comes from the anti-Israel organization Jewish Voice for Peace (JVP). This group may be the single-most misnamed organization in the history of section 501 of the tax code. While some JVP members might be Jewish according to religious law, their Judaism exists only to be used as a cudgel against the people with whom they claim to identify. They aren’t “for peace.” They’re in league with and providing cover for some of the planet’s worst Jew-haters. The Anti-Defamation League has even published a thorough takedown of them. They explicitly support a Palestinian “right of return,” which is to say they support the end of the Jewish state, whose founding they refers to as a “nakba”—Arabic for catastrophe. They are, at least in the positions they espouse in writing, in line with the terror organization Hamas and more radical than the Palestinian Authority.

The JVP anti-Birthright manifesto reads like the kind of self-centered, labile poetry an adolescent might write. Despite being the kind of faux-erudite, meaningless-intersectional-jargon-filled nonsense to which we’ve conditioned our society to be susceptible, in the sense of stopping meaningful numbers of kids from taking a free trip to Israel, it won’t work. But then, its primary purpose is not to damage Birthright the organization. It’s designed to chip away at the heart of Zionism—the need for and desirability of Jewish national consciousness.

JVP isn’t even interested in damaging Birthright, the organization. If it were, the marketing campaign would be #RejectBirthright. Instead, it wants to #ReturnTheBirthright. Return is a permanent state of surrender, and the definite article “the” isn’t necessary if you’re talking about the proper noun Birthright. The manifesto is explicit: it’s not okay that Israel exists. The campaign seeks to fertilize the idea among young Jews that it’s acceptable to reject the Jewish national homeland with the ancillary benefit of maybe damaging an organization they dislike.

For decades, the American Jewish community didn’t need to make the case that Zionism addressed an urgent, ongoing Jewish need. The case was obvious. As the founding generations and miracles of the Jewish state fade into history, however, that clarity has been lost. But now that we do need to make this case, we seem to lack the conviction to do so. Whether out of a misguided desire to make the enemies of Jewish national aspiration welcome in our communities, exhaustion from an argument that never seems to end, or our own political misgivings about Israeli policies, we have failed and are failing to convince Jews of the continuing centrality of Zionism to who and what we are.

The best response to the irritant of JVP would be to create and promote a core curriculum of unapologetic Zionism to every religious school and adult education program at every synagogue and JCC in the country. Not the history of Israel or the details of her defensive wars and conflicts (although that would also be valuable, if more politically problematic), but of the tremendous historical and intellectual roots of what the rabbi, activist and scholar Arthur Hertzberg called “the Zionist idea.” Imagine if the resources of the broad, organized Jewish community were brought to bear on such a project. Imagine if the rebellious teenagers of JVP and their ridiculous manifesto had to compete in the marketplace of ideas with Hess, Ahad Ha’am, Klatzkin, Brandeis, Rabbi Kook and Jabotinsky!

So let’s make them! This attack on Birthright—an organization surely among the greatest in our people’s storied history—should be the last straw.

Jonathan Greenberg is an ordained reform rabbi and the senior vice president of the Haym Salomon Center. Follow him on Twitter: @JGreenbergSez.