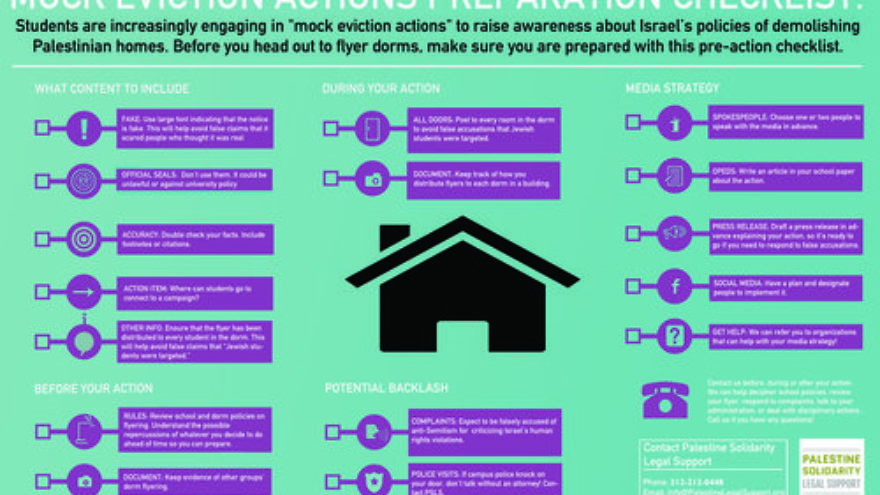 The New Israel Fund (NIF) recently received a grant to “research and report on anti-Semitism on U.S. campuses.” On the surface, this appears to be a welcome development—a progressive group being mobilized to confront a major social malady plaguing institutions of higher education.

Beneath the surface of the Sept. 27 grant, however, are vested interests seeking to use this issue to cover up their role in fomenting the atmosphere that is hostile to Jewish students. The NIF is being paid by the Rockefeller Brothers Fund (RBF)—a main backer of the anti-Israel activism that contributes to, enables and devolves into anti-Semitism on college campuses.

RBF provides hundreds of thousands of dollars to a number of organizations that delegitimize the Jewish state and promote the anti-Israel Boycott, Divestment and Sanctions (BDS) movement, both on and off campus. These RBF’s BDS-promoting grantees that are active on American universities include Jewish Voice for Peace (JVP), Palestine Legal and the American Friends Service Committee (AFSC).

Several of the RBF grantees promote agendas that deny Israel’s legitimacy and advocate “one-state” formulas designed to eradicate the Jewish state. Zochrot, for example, envisions a “de-Zionized Palestine,” while Adalah systematically works in the U.S. and Europe to label Israel as a fundamentally “racist” state. Additionally, Grassroots Jerusalem, Who Profits and the U.S. Campaign for Palestinian Rights (formally the U.S. Campaign to End the Israeli Occupation) are all leaders in BDS campaigns in the U.S. and internationally.

In other words, the New York-based fund has made the waging of economic, political and cultural warfare on Israel a central theme of its grant-making.

As noted, many of RBF’s grantees are deeply involved in myriad anti-Israel activities, either by directly coordinating and participating in them, or by providing training and legal aid to activists. JVP, for instance, has chapters on campuses throughout the country and partners with Students for Justice in Palestine in promoting divestment resolutions and organizing the notorious “Israeli Apartheid Week.” Additionally, JVP members participate in numerous anti-Israel events, creating a façade of Jewish support and approval for the delegitimization of Israel.

In parallel, the Palestine Legal NGO offers guidance to campus activists on activities such as setting up mock checkpoints and posting mock eviction notices on dorm room doors, advising students to “post to every room in the dorm to avoid false accusations that Jewish students were targeted.” In addition, officials from RBF grantees such as AFSC, U.S. Campaign and Breaking the Silence regularly speak at anti-Israel campus events.

As several in-depth reports and publications have shown, the marked increase in virulently anti-Israel activity on campuses throughout the U.S. has coincided with higher rates of anti-Semitism at these same institutions. In October 2016, Brandeis University released another installment in a series of studies on the issue. In this latest installment, university researchers found that on many campuses in the country, “it appears that the high rates of anti-Semitic harassment and hostility are largely driven by hostility toward Israel.”

Considering RBF’s culpability in funding and enabling organizations that create this intimidating environment for Jewish students, it is curious that RBF would commission a publication that studies the rise of anti-Semitism at American colleges. Any serious publication would, ultimately, implicate RBF itself and cite its funding for anti-Israel campus groups and related organizations.

But the routine denials on the part of its grantees that anti-Israel activity can lead to or amount to anti-Semitism provide a clue as to RBF’s motivations and to its desired conclusions for the study. Both JVP and Palestine Legal have attacked and rejected the U.S. State Department definition of anti-Semitism, which recognizes demonization of, application of double standards to and delegitimization of Israel as anti-Semitic. JVP and Palestine Legal falsely allege that this standard is “construed to silence any criticism of Israeli policies” and to “censor speech.” Similarly, JVP strongly opposed and campaigned against the March 2016 University of California Board of Regents statement that affirmed, “Anti-Semitism, anti-Semitic forms of anti-Zionism and other forms of discrimination have no place at the University of California.”

RBF’s choice of NIF to conduct this study should be considered in this light. As opposed to the researchers and experts at Brandeis, the various Jewish organizations that focus on Jewish life on campus, and groups that closely monitor anti-Semitism in the U.S., NIF has no significant history of studying and commenting on anti-Semitism or campus activity.

Given RBF’s extensive funding of BDS and delegitimization of Israel, it is reasonable to ask if the fund is using its financial power to whitewash its grantees’ involvement in fanning the flames of anti-Jewish hatred. What is less clear is why NIF would lend its name to such a charade.

Yona Schiffmiller is the director of the North America Desk at NGO Monitor, a Jerusalem-based research institute.