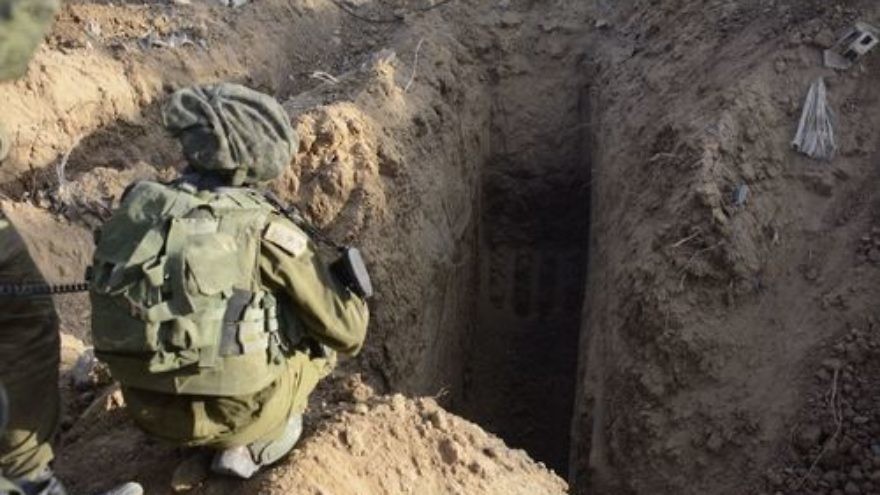 Last week’s deaths of seven Hamas terrorists in the collapse of a tunnel they were digging coincided with complaints by residents of an Israeli town near Gaza that underground digging has come so close to their homes that they have felt their floors shake.

Speaking on Israel Radio, the head of the Eshkol Regional Council, Gadi Yarkoni, said numerous residents of Moshav Pri Gan, adjacent to the Gaza border, have reported hearing the sounds of underground digging and felt the floors of their homes shaking.

What’s going on here? We thought the Hamas terror tunnels were a thing of the past. They were supposed to have been destroyed in the 2014 Gaza war. The Obama administration promised that safeguards would be in place to ensure that cement entering Gaza would be used for houses that were damaged in the fighting.

Thanks to former State Department official Dennis Ross, we now know what happened to all those U.S. promises. From 2009 to 2011, Ross served as a senior aide to then-secretary of state Hillary Clinton and as Middle East director on the National Security Council. During the 2014 Gaza war, Ross, writing on the op-ed page of the Washington Post in August, revealed some of what went on behind the scenes in the preceding years.

“I argued with Israeli leaders and security officials, telling them they needed to allow more construction materials, including cement, into Gaza so that housing, schools, and basic infrastructure could be built,” Ross disclosed. “They countered that Hamas would misuse it, and they were right.”

Assured by the Obama administration’s insistence that the cement would not be used, Israel allowed it to be imported. The result? Hamas built “a labyrinth of underground tunnels, bunkers, command posts and shelters for its leaders, fighters and rockets,” Ross wrote. They built them with “an estimated 600,000 tons of cement,” some of which was “diverted from construction materials allowed into Gaza.”

In last week’s Democratic “Town Hall” event in Iowa, Hillary Clinton spoke with pride of her energetic efforts to negotiate an end to the second Gaza war (in 2012). She said the Israelis were convinced that they needed to send ground forces into Gaza to root out the terrorists. For some reason, Clinton either was confident that she knew better; or she simply didn’t care whether or not the terrorists were defeated. She described how she frantically shuttled from Cairo to Jerusalem to work out a cease-fire and deter an Israeli ground invasion.

The second sentence of the cease-fire agreement that Clinton brokered stated: “All Palestinian factions shall top all hostilities from the Gaza Strip against Israel, including rocket attacks and all attacks along the border.”

It seems to me that digging a tunnel from the Gaza side of the border to the Israeli side of the border, for the express purpose of kidnapping and murdering Israelis, qualifies as “hostilities.” Yet in the months following the cease-fire, the Obama administration did nothing to stop the digging.

One is left with the distinct impression that the Obama administration wanted a cease-fire at any price. But as usual, it was Israel that ended up paying the price. The Israeli ground forces were never sent in, leaving Hamas two more years to dig the tunnels that wrought such havoc in the third Gaza war, in 2014.

In her remarks at the Iowa event, Clinton made no mention of the consequences of her cease-fire. It was as if the tunnels never existed, as if her cease-fire brought peace and harmony to the Middle East.

But here we are again, back at square one, with the Obama administration pressing Israel to allow cement for “home reconstruction,” and Hamas diverting the cement for tunnel reconstruction.

Homes in Moshav Pri Gan are shaking from all the digging that is supposedly not taking place. Hamas terrorists are dying in the collapse of tunnels that supposedly do not exist. And the Times of Israel reports: “It is estimated that since the end of [Operation] Protective Edge, Hamas has dug dozens of tunnels of varying lengths.”

Dennis Ross summed it up: “They were right.” The Israelis were right, after all. The Israelis were right that cement would be used for terror tunnels. Now it’s time for all the Obama administration officials, past and present, who had a hand in this fiasco to take responsibility for the consequences of their actions, and to endorse Israel’s right to intervene.