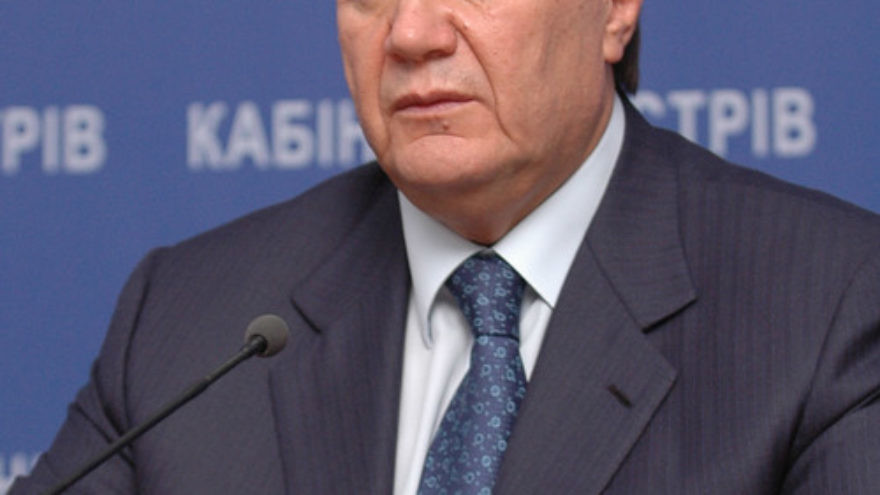 (December 8, 2013 / JNS) In a country engulfed by anti-government protests, Ukrainian Jews find themselves facing the same existential choice as the rest of the country.

The protests began during the last weekend of November, when Ukrainian police clashed with hundreds of protesters in Kiev’s Independence Square, known as “Maidan.” The crowd was protesting Ukrainian President Viktor Yanukovych’s decision to freeze plans to join a free trade agreement with the European Union just before the Vilnius Eastern Partnership Summit.

Instead, Yanukovych indicated an intention to join the Eurasian Customs Union, an economic union dreamed up by Russian President Vladimir Putin that is viewed as a precursor to a wider Eurasian Union of Eastern European countries and the Caucausus. The Ukrainian government also refused to honor the EU’s demand to free jailed former prime minister Yulia Tymoshenko. On Dec. 8, protesters opposing the government’s push for closer ties with Russia toppled a statue of Vladimir Lenin in Kiev.

While thousands continued to come out over the past week to protest Yanukovych’s about-face regarding the EU trade agreement, the country faces the larger existential choice between what many criticize as a corrupt post-Soviet government and the possibility of a democratic European government. The country’s Jewish community—which comprises between 350,000 and 500,000 people, according to estimates by the American Jewish Joint Distribution Committee—is facing the same choice.

“Ukraine is now caught between a rock and a hard place,” Sam Kliger, the American Jewish Committee’s (AJC) director of Russian Jewish community affairs, told JNS.org. “On the one hand they wanted to go West and to join the European Union; on the other hand they are pressured by Russia… to join the so-called customs union.”

Josef Zisels, chairman of the Association of Jewish Organizations and Communities (Vaad) of Ukraine, told JNS.org in an email interview translated from Russian, “In Ukraine all the major decisions are made by one person—the president,… [who] was apparently not planning to sign an agreement with the EU at all but simply mislead everyone domestically, as well as in the European Union and Russia, while trying to bargain for more assistance for his policies.”

On Nov. 30, police beat protesters with batons and sprayed tear gas at the gathered public. Over the past week, reports indicate that the Ukrainian government may have infiltrated protests through plain-clothed individuals who provoked violence from police by hurling stones and wielding chains. Dozens were detained or hurt, some severely, during the clashes.

“Until today (Dec. 6) there is still no a clear plan of action on the part of opposition leaders. But the authorities make it clear that they are not ready to concede anything,” Christina Mertes, a 23-year-old activist from Kiev who is participating in the protests and requested that her real last name not be published, told JNS.org in an email interview translated from Russian and arranged by AJC.

“It is clear that this police brutality could not have been authorized only at the local level. That is—the command to eliminate the Maidan [protests] came from the top,” she said.

Mertes also points to President Yanukovych’s corrupt record, including convictions for robbery and assault as well as political corruption in his government. As the protests continue, the question of Ukraine’s association with the EU has receded into the background in favor of the larger issue of maintaining the government’s integrity.

“It is obvious there is an ongoing game meant to return Ukraine to the Soviet era,” Mertes said.

According to Zisels, some Ukrainian Jews also participate in the ongoing protests, although it is difficult to estimate how many. Zisels himself, as well as friends and members of his family, are involved.

“I believe, first, that the Jewish youth participate more often than older people, and, second, that as in other actions directed to democratize society, participation of Jews is disproportionately high,” he said.

Jewish communities in Eurasian Union countries face little of the state anti-Semitism that was prevalent during the Soviet era. But these countries’ political and economic instability, and the potential use of the “Jewish card” by authoritation regimes, especially in pre-election periods, is a major issue for Jewish communities.

These countries are also underdeveloped economically and lack the legal framework that would allow their Jewish communities to solve problems related to heritage preservation, restitution of Jewish property, or the collection of funds for their activities.

“These are issues that are quite successfully resolved in the Eastern European countries that have joined the EU in the last 20 years, ”Zisels said.

Zisels believes that Ukrainian Jews need to ask themselves first and foremost what is best for Ukraine and all its citizens. Ukraine has the chance “to break the chain of tragedies in its history and become a stable European country,” and it would be “best in all respects for Ukraine to join the EU: for Ukraine as a whole, for its minorities, and in particular for Jews in Ukraine.”

Mertes believes, like many in the protesting opposition, that Russia is making unprecedented interferences in Ukrainian affairs. According to Kliger, Ukraine always had tight relations with Russia historically, economically, and politically that simply cannot be ignored.

Neverhtheless, AJC supports “every democratic change that we can see in Ukraine. In that context we do believe that going with the West and the EU, Ukraine will continue its movement toward democracy, rule of law, transparency, less corruption and many other things that are characteristic of a democratic country,” Kliger said.

Some Ukranian Jews are concerned about potential anti-Semitic street incidents that could take place under the guise of the protests. Rabbi Moshe Azman, a local Chabad emissary, told Israel National News that he had cancelled several public events celebrating Hanukkah due to fears that “groups of hooligans” could target Jews.

On the other hand, Rabbi Jonathan Markovitch of the Federation of Jewish Communities in Kiev said his community has “been holding menorah lightings among the crowds of protesters,” the Jerusalem Post reported.

AJC is also concerned with possible anti-Jewish manifestations in the protests by the Ukrainian political oppostion party Svaboda, which is viewed as an anti-Semitic and neo-Nazi group by various Jewish organizations.

“That remains to be seen. So far we haven’t seen this,” Kliger told JNS.org.