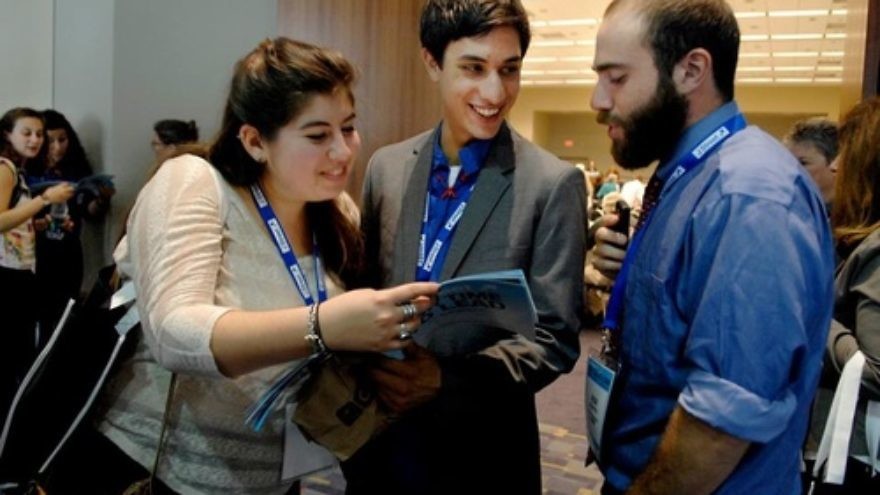 (May 4, 2014 / JNS) To the chagrin of supporters who confidently predicted otherwise, J Street failed to receive the votes it needed for admission into the Conference of Presidents of Major American Jewish Organizations. So now, they have a new spin.

Had J Street won the vote, of course, its supporters would have claimed the vote was a victory for a “wider range of views on Israel” and, of course, democracy. But having failed in their efforts, supporters have responded with unbecoming condemnation of that same democratic process. The Conference of Presidents followed its by-laws, which require a new applicant to receive the support of two-thirds of its members.

“An analysis of the vote,” argues the Forward, “indicates that J Street enjoyed the support of liberal groups, Reform and Conservative organizations and several major players, including the Anti-Defamation League and the Jewish Council for Public Affairs. The majority voting against it were right-wing and Orthodox organizations, as well as smaller groups with no clear ideological leaning.”

The Conference has 51 members, of which 17 supported the admission of J Street, three abstained, 22 voted against, and nine didn’t care to attend. To claim that the majority of the 34 members who did not support J Street are right wing, Orthodox, or have no clear ideology is untrue and ridiculous. In this case, perhaps more than most, the vote represented the consensus of the American Jewish community, which regards J Street and its policies to lie beyond the pale. Even Anti-Defamation League President Abraham Foxman, in announcing that he would vote in favor, said he did so not because the ADL supports J Street’s views, but to define American Jewish advocacy more broadly.

Nonetheless, Reform leader Rabbi Rick Jacobs has responded to the vote by announcing that the Union of Reform Judaism may consider dropping out of the Conference of Presidents entirely. Similarly, Rabbi Julie Schonfeld, executive vice eresident of the Conservative movement’s Rabbinical Assembly, has claimed the vote was unrepresentative, and called on the Conference of Presidents to examine its structure—claiming J Street would have won the “popular vote” of the organizations’ memberships.

It is interesting to note that the Reform and Conservative movements each have four votes in the Conference: Union for Reform Judaism, Central Conference of American (Reform) Rabbis, Women of Reform Judaism and ARZA, Association of Reform Zionists of America, United Synagogue of Conservative Judaism, Rabbinical Assembly (of Conservative rabbis), Women’s League for Conservative Judaism, and Mercaz, the Zionist Organization of the Conservative Movement. Those eight groups constituted almost half of the positive votes that J Street received, and they claim the system was unfair; it was in fact in their favor, and they still lost the vote. In addition, the Conference by-laws were last updated under the committee chairmanship of Rabbi Joel Meyers, then executive vice president of the Rabbinical Assembly of Conservative Judaism. This reminds me of the kid in the schoolyard who makes the rules in his favor, but when he looses the game, claims it was unfair.

In making these declarations, Rabbis Jacobs and Schonfeld presume to speak for the aggregate membership of the Reform and Conservative synagogues nationwide. Is the majority of the membership of AIPAC not comprised of Reform or Conservative Jews? Needless to say, they don’t support J Street. Many Reform and Conservative Jews that I have spoken to in the last few weeks have told me that they believe J Street is not healthy for Israel. I wonder what the individual members of these movements really think.

Leaders of the Reform and Conservative movements like to say that they represent the majority of American Jews. The recent findings of the Pew report debunk that myth. Today, unfortunately, the “Jews of no religion” are the fastest-growing Jewish group; they care little, if anything, about Judaism or Israel. How many families in these movements joined congregations because membership (and Hebrew school) were prerequisites for bar and bat mitzvahs, and not because they endorse the positions or policies advocated by the Rabbis? Today, a staggering 50 percent of married, self-identified Reform Jews have a non-Jewish spouse. The intermarriage numbers in the Conservative movement are, unfortunately, growing as well. Both movements are shrinking, unable to predict where and what they will be by the time the next Pew report is issued.

If we are going to consider the popular consensus of the active Jewish community, then we must incorporate the views of hundreds of thousands of American Jews, in fact the most strongly Jewish affiliated, who do not currently have a voice at the Conference table. Traditional Orthodox Jews, who the media prefer to label ultra-Orthodox or Hassidic, care deeply about the land and people of Israel, send their sons and daughters to study in Israel, vacation in Israel, and have family living in Israel. There are vast numbers of Jews, while not fully observant to Orthodox standards, are affiliated with the more than 1,000 Chabad-Lubavitch centers nationwide, and other groups in the Orthodox community. Their children are receiving a Jewish education, their intermarriage rate is in the low single digits, and they too care deeply about Israel. It is very doubtful that J Street has any support in either of these very large constituencies.

Add in the memberships of the Young Israel, the Orthodox Union, the RCA, the Religious Zionists of America, Emunah, Amit, ZOA, CAMERA, JINSA, and many others—religious, Zionistic, and secular—and the “popular vote” of the Jews in our greater community definitely agree with the decision of the Conference of Presidents’ super majority.

J Street may be loud, and they may have strong support from some liberal Jewish leaders, but I would strongly suggest that their support lies with a small minority of the American Jewish community. It is not without cause that their attempt to supplant AIPAC as the respected voice of pro-Israel advocacy has proven an utter failure. Most Jews see J Street as an organization attempting to do an end-run around Israeli democracy, badly out of sync with our brethren in Israel.

It remains difficult to find a statement of Palestinian Authority President Mahmoud Abbas that J Street does not at least defend, if not explicitly endorse—even, most recently, responding “with caution” to reconciliation between Fatah and Hamas, a terrorist organization still committed to the destruction of Israel and the annihilation of its Jewish residents, and urging the United States to “press forward with an even more assertive effort” to finalize a two-state solution.

The rejection of J Street by the majority of the Conference of Presidents’ membership was an important moment in American Jewish life. J Street’s positions are dangerous to the State of Israel, and are outside the Jewish mainstream. Denying them a seat at the table sends a strong message: before you can be part of the communal conversation, your views must lie within the community. We can agree that the Jewish community needs to be represented within a big tent, but every tent has walls to keep certain people out, and to protect the people on the inside. A group that wants to negotiate with a terrorist organization whose stated objectives are the murder of Jews and the destruction of Israel does not belong in the big tent.