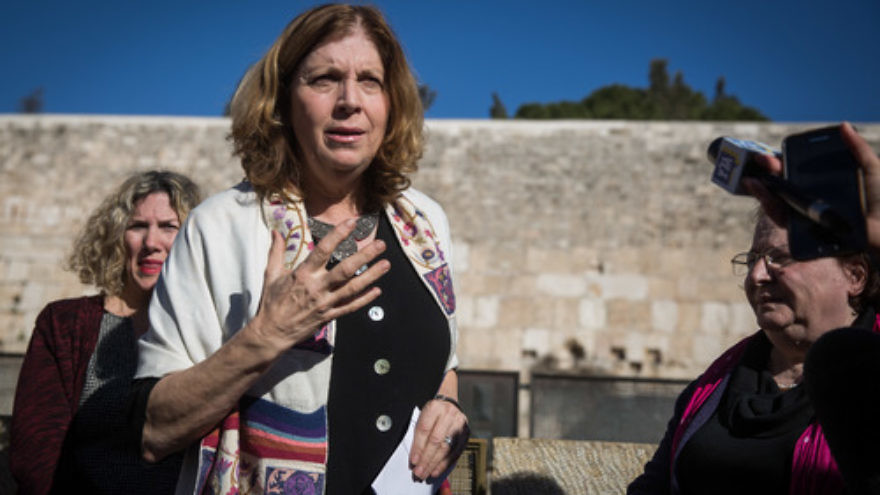 Anat Hoffman, leader of the Women of the Wall group, speaks with members of the media near the Western Wall on Jan. 31, reacting to the Israeli government's passage of a new plan on egalitarian prayer rights at the Jewish holy site. Credit: Hadas Parush/Flash90.
Republish this article
1482 WORDS
Spread the word.
Help JNS grow!
Share now:

The Israeli government’s passage of legislation that authorizes egalitarian prayer in a soon-to-be-created 9,700-square-foot, NIS 35 million ($8.85 million) section adjacent to the southern part of the Western Wall (Kotel in Hebrew) has been called groundbreaking, empowering, dramatic, and unprecedented. The section could be ready in as soon as a few months or up to two years from now.

“This is a fair and creative solution,” said Prime Minister Benjamin Netanyahu after the 15-5 vote on the measure by his cabinet.

Rabbi Rick Jacobs, president of the Union for Reform Judaism (URJ), said the decision would “connect world Jewry to the State of Israel.” Jerry Silverman, CEO of the Jewish Federations of North America (JFNA), called it a “major step forward.” Member of Knesset Merav Michaeli (Zionist Union) said the Kotel was “liberated” again, this time not by soldiers, but by women in Jewish prayer shawls.

Indeed, for 27 years, the Women of the Wall group pushed for women’s equality at the Kotel. Formal negotiations have been going on for almost three years. In a statement, the group said more than just an agreement has been achieved: “The vision of the new section of the Kotel is a physical and conceptual space open to all forms of Jewish prayer. Instead of splitting up the existing pie into ever more divided, smaller pieces, we are making the pie much larger.”

The new section, which will qualify for government funding, will be managed by a public council, governed by a committee headed by the chairman of the Jewish agency and comprised of representatives from the Reform and Masorti (Conservative Judaism in Israel) movements, JFNA, and Women of the Wall. An administrator for the section will be appointed by the Prime Minister’s Office.

Beyond the blueprints, the ratified plan is a powerful statement about the overt impact Diaspora Jewry and global Jewish leaders could have on Israeli decision-making.

This is a paradigm shift.

U.S. Jews have traditionally served as a political lifeline for Israel, lobbying American governments on behalf of the Jewish state. Recent occurrences have shifted the relationship between the American and Israeli Jewish communities into one of semi-equality, which includes American Jewish leaders objectively discussing Israel’s policies rather than blindly supporting them.

Silverman called this shift evolutionary. Rabbi Gilad Kariv, executive director of the Israel Movement for Reform and Progressive Judaism, said the negotiations “prove the role that North American Jewry…can and should play in helping Israel make our country more inclusive.”

“Kudos to the unrelenting advocacy from the North American Jewish community in pushing for this,” said Rafi Rone, former vice president of Jewish and Israel Initiatives at the Joseph and Harvey Meyerhoff Family Charitable Funds. “The dawning of a new day.”

In an interview with The Jerusalem Post, Jewish Agency for Israel Chairman Natan Sharansky said that American and Israeli Jews are becoming increasingly interdependent. The U.S. needs Israel to help strengthen Jewish identity in a Diaspora community that is slowly shrinking from assimilation and intermarriage. Israel, attacked daily by the international community, needs the solidarity of Jewish communities abroad, he explained.

“I am sure that the [Israeli] government must now take into account—should take into consideration—the position of world Jewry on the decisions it makes,” Hagay Elizur, senior director of diaspora affairs for Israel’s Ministry of Public Diplomacy & Diaspora Affairs, toldJNS.org.

Last November, speaking at JFNA’s General Assembly, Netanyahu called on American Jewish leaders to “work together to unite the Jewish people.” At that time, he underscored his new commitment to guarantee equal rights to members of the Reform and Conservative movements in Israel. The prime minister noted his work with the committee for a compromise on the Kotel as an example of his efforts.

Now, pluralistic Jewish leaders are touting the work they did as a model for future initiatives. Rabbi Julie Schonfeld, executive vice president of Conservative Judaism’s Rabbinical Assembly, said the negotiating process was almost as significant as its outcome in that it showed that even Jewish leaders with varying opinions could “hang in there” and handle “complex negotiations” when they have a shared interest.

“There were a lot of compromises to get here,” Schonfeld told JNS.org. “It was a real test.”

Pluralistic leaders claim the plan is likewise a powerful and formal recognition of Reform and Masorti Judaism, and an acceptance by the government of their legitimacy in Israeli religious life. Currently, between seven and 10 percent of Israelis consider themselves Reform or Masorti, according to Yizhar Hess, executive director and CEO of the Masorti Movement in Israel, and there are 120 Reform and Masorti synagogues.

URJ’s Jacobs said Reform movement leaders intend to use the Kotel plan as “an opportunity to go farther and in so doing really do holy work.”

“Similar coalitions could work together again and use this agreement to open the floodgates for religious pluralism and women’s rights in Israel,” Shira Pruce, director of public relations for Women of the Wall, told JNS.org.

Hess said the decision puts a precedent in place for how to solve future challenges, such as the desire for civil marriage in Israel, more kashrut options, and greater flexibility when it comes to Jewish conversions.

“This is the way to solve it—options,” said Hess, referring to the new option at the Kotel. “This is what we will demand.”

The next big issue for the pluralistic Jewish movements is marriage equality, or the ability to perform civil marriages and marriages outside of the Chief Rabbinate, which adheres to Orthodox traditions.

Most recently, JFNA launched iRep—the Israel Religious Expressions Platform—and awarded grants to three Israel-based groups to encourage Israelis to consider marriage alternatives. Silverman said by working with grassroots organizations that care deeply about the issue, JFNA hopes to educate a broader spectrum of Israelis about the subject. A 2015 study by NGO Hiddush found 64 percent of Israelis favor recognizing all types of marriage, including civil, Reform, and Conservative, while 70 percent of self-identified “secular” Jews and 67 percent of immigrants would prefer a non-Orthodox framework for marriage if one were available.

The Masorti Movement’s Hess said that 10 years ago, such grants would not have been available because the time was not right for such a shift. Today, however, there are more than 600,000 Israelis who would not qualify to get married in Israel under the rules of the Chief Rabbinate, and more Israelis are expressing that they don’t want to choose such a religious option.

“I am optimistic,” Hess told JNS.org. “Like the agreement with the Kotel, which came from the bottom up and through monthly riots…50,000 people coming annually to pray at Robinson’s Arch (the site adjacent to the Western Wall where egalitarian prayer was already permitted), the government was forced to make a courageous decision. I think the same thing will happen with marriage.”

Some Orthodox leaders are not going to let these changes happen easily. In an interview with JNS.org, Rabbi of the Western Wall Shmuel Rabinovitch called the government’s Kotel plan a desecration of God’s name. He said he did not consider himself a partner in the Kotel negotiations.

“I don’t know if there is anything we can do to stop it now, I am deeply saddened….I hope that we can get the whole thing cancelled,” he said.

Rabinovitch did say, however, that the ratified Kotel plan was a better option than bad alternatives that were discussed.

Seth J. Frantzman, the opinion editor for The Jerusalem Post and someone not affiliated with any particular Jewish denomination, equated the Kotel plan to how Christians handled Jerusalem’s Church of the Holy Sepulchre, earmarking different spaces for different Christian denominations. This, Frantzman wrote in a Facebook post, “literally illustrates the disunity of Judaism.”

For now, the plan is just that—a plan. But once the new section is built, will it attract more Diaspora Jews who say they don’t come to Israel because they feel underrepresented there?

“There will be no more excuses,” Elizur, of Ministry of Public Diplomacy & Diaspora Affairs, told JNS.org.

Hess added, “We are eager to make Israel both more democratic and more Jewish at the same time.”