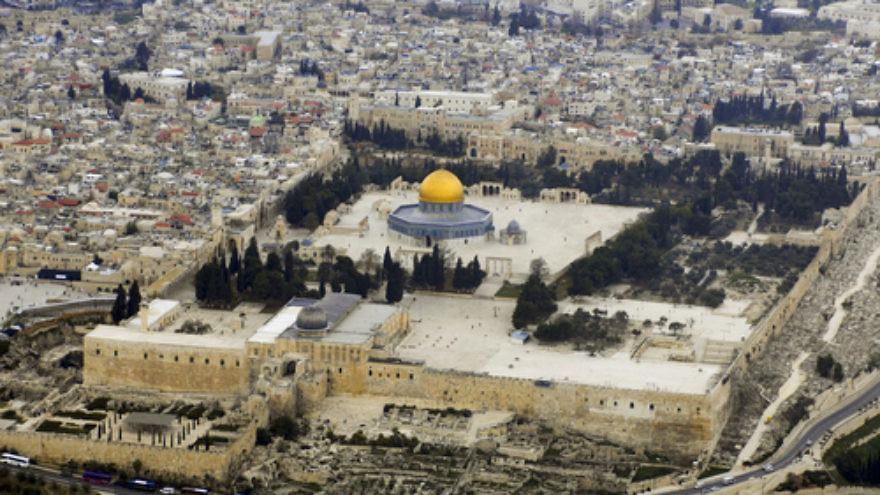 (November 18, 2014 / JNS) There are few subjects in Israel these days that arouse greater passion than prayer rights at the Temple Mount.

The dramatic uptick in Palestinian terror attacks on Jews in Jerusalem in recent weeks, including Tuesday’s killing of five at a synagogue in Har Nof, has raised the temperature of the long-simmering debate over control of the holy site to a boiling point. Rabbi Yehudah Glick, a promoter of Jewish access to the Temple Mount, is still recovering from being shot by an Arab gunman on Oct. 29. Increased Muslim riots have prompted police to further clamp down on Jews visiting the site, especially for anyone making any gesture that could be interpreted as prayer.

Today, a waqf (Islamic religious committee) manages the Temple Mount, though Israel provides security and enforces the waqf’s policies on access. The 37-acre compound is currently home to the Muslims’ Al-Aqsa Mosque and Dome of the Rock, sites that date back to the 7th century CE. But long before that time, the Temple Mount was revered by Jews as the spot where God created Adam, where Abraham was willing to offer his son Isaac as a sacrifice, and centuries later, where both Jewish Temples stood. Jewish tradition also says the third Temple is destined to be built there.

Yet Jews are banned from praying on the Temple Mount, and Prime Minister Benjamin Netanyahu has said that Israel intends to maintain the “status quo” at the site.

“From the day we captured the Old City [of Jerusalem] in ’67, the whole question of whether we should have the right to pray on the Temple Mount has been nothing short of bizarre,” said Jeff Bell, a resident of Ramat Beit Shemesh, which is located about 20 miles west of Jerusalem. “The real question is, why would we not have the right to pray at the Temple Mount, the holiest spot in the Jewish world? But now, if you are caught swaying, you can be arrested.”

The office of Rabbi Binny Freedman, director of both the Jewish education organization Isralight and the Orayta Yeshiva, is located just blocks away from the Temple Mount in the Old City. Freedman said he is concerned about the Israeli government’s attempts to limit Jewish prayer rights whenever Muslims become violent because that amounts to “rewarding the aggressor, a strategy that has been demonstrated to fail time and again, particularly in the Arab mindset.”

Freedman added that the controversy about Jews praying at the site “is not really about the Temple Mount.”

“This issue is being used by Muslim and Arab protagonists with an agenda that is much broader. It is part of a struggle against the legitimacy of having a Jewish state to begin with,” he said.

Yet Israeli-Jewish opinion on the issue is divided. That schism is reflected in a recent “Peace Index” survey by the Guttman Center at the Israel Democracy Institute and the Evens Program for Solution Conflict Resolution at Tel Aviv University. The findings said that nearly 40 percent of the Jewish population in Israel believes the policy governing Jewish prayer on the Temple Mount needs to be allowed, whereas 56 percent maintain that Jews should not be permitted to pray there in order to “prevent friction with the Muslim world.”

Kfar Saba resident Gaby Feigin describes the Temple Mount situation as “wide and explosive.” Though he is in favor of Jews being able to pray “in well-defined areas of the Mount,” he said he is “pessimistic about our future there” because there are advocates of Jewish prayer at the site who “don’t want dialogues between the various religious and ethnic groups, and some of them also want to destroy the mosques of Muslims on the Temple Mount and rebuild the Temple.”

Mitzpe Jericho resident Leah Edelblum believes the Temple Mount issue is currently at a stalemate because “back in ’67 we got ourselves into this mess.” What she is referring to is Israeli general Moshe Dayan’s controversial move—after Israel won back Jerusalem’s Old City in the Six Day War of 1967—to give jurisdiction over the Temple Mount to the Muslims, who had centuries earlier built a mosque on the former site of the Jewish Temples. Israeli police still oversee the Temple Mount compound, in part to protect the vulnerable population of Jews praying around the clock nearby at the Western Wall.

“We gave [the Temple Mount] away when it was not ours to give, but God’s. Now we are dealing with the ramifications of that bad decision,” Edelblum said.

At the same time, many observant Jews stay away from the Temple Mount out of fear of accidentally walking over the spot of the Holy of Holies, the room in the former Jewish Temple where the high priest entered each Yom Kippur to beseech God on behalf of the entire nation.

Among the observers endeavoring to de-mystify the complexities of the Temple Mount is Rabbi Stewart Weiss, a Jerusalem Postcolumnist whose day job is directing the Ra’anana-based Jewish Outreach Center. Though many Israelis don’t think Jews should be able to pray at the Temple Mount—whether it be out of fear of angering Muslims or accidentally trampling over the Holy of Holies—Weiss argued “that we not allow ourselves to be intimidated by rioting, which then results in the police clamping down further on Jews on the site.”

The claim that a Jewish presence on the Temple Mount “inflames” Muslim sensitivities and invites disaster is disingenuous, according to Weiss. “While today the Mount may indeed be a flashpoint for [Muslims], last week it was the light rail, and tomorrow it may be the Malcha Mall [in Jerusalem],” he said. “What shall we do when they riot en masse at the Kotel, or at the Cave of Machpela (Hebron’s Cave of the Patriarchs)… Shall we forbid Jewish worship there, too?”

Yitzhak Sokoloff agrees that the issue goes well beyond this trapezoidal piece of land. A veteran political analyst and the president of Kesher, an educational tour business, Sokoloff called the Temple Mount situation “very dangerous stuff.”

“It’s being used to manipulate the Muslims—anytime their political leadership wants to create violence on the streets, they fire up their followers with talk about the Jewish ‘settlers’ attacking the Temple Mount,” he said. “In recent years it’s become a very clever rallying cry.”

Indeed, in October, Palestinian Authority President Mahmoud Abbas warned that “we have to prevent the settlers from entering the Temple Mount by any means. It is our mosque and they have no right to enter and desecrate it.”

So what is likely to be the fate of the Temple Mount? Like Feigin, many Israelis are pessimistic about the situation. The “Peace Index”survey found that less than one-third of Israeli Jews (31 percent) believe there is now a chance to reach an agreement that will allow both Jews and Muslims to pray there on a regular basis.

But Sokoloff sees a ray of hope, however thin.

“We will always stick to the idea that holy places have to be shared,” he said. “We make it clear that we are not fighting to turn it into the third Temple but that, yes, Jews have a right to pray up there, as do Muslims.”

Weiss said a synagogue should be built on the Temple Mount, at a reasonable distance away from both Al-Aqsa and the Dome of the Rock.

“It wouldn’t threaten [Muslims worshippers] in any way,” he said. “There is plenty of room up there, that’s not an issue, and it can be built in a place that in no way raises halachic concerns [about trespassing on the Holy of Holies].”

“It can be done peacefully,” added Weiss. “But when it comes to the Muslim ideology that Israel is Muslim land and they’re the only ones who should be allowed to pray in this country, we need to make it very clear that this is our country and we can’t be gun-shy.”