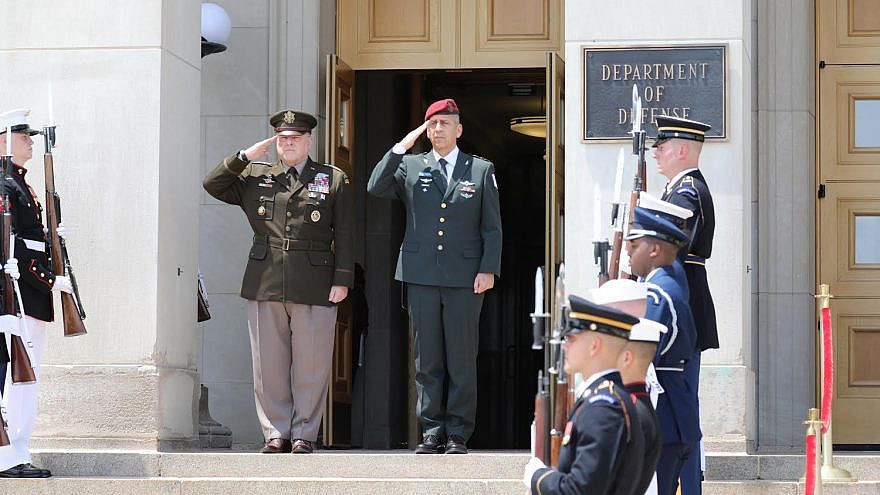 At the top of the priority list is communicating the IDF’s position and the latest intelligence assessments on the Iranian nuclear program. According to an Israeli military source, Kochavi is set to meet with American defense officials to discuss in detail professional military-to-military concerns about the nuclear program, which has been highly active in recent months.

Kochavi will also detail inherent dangers from Israel’s perspective that are associated with a return to the 2015 nuclear deal.

The IDF is particularly concerned by the prospect of the agreement’s sunset clauses, and how they could grant the Iranian regime breathing space and the ability to acquire dangerous capabilities.

Kochavi’s position on the matter is no secret; he expressed it openly in January during a speech in which he stated that a “return to the nuclear deal from 2015 or even a similar deal with a few improvements is bad and wrong. It is wrong operationally and strategically. Operationally, because it would again allow at its end, or before, the Iranians to enrich uranium, develop centrifuges, and a weapons capability [taking them up to] breakthrough [to a nuclear weapon]. Strategically, it would present an intolerable threat to Israel and apparently spark a nuclear arms race in the Middle East. Hence, anything that resembles the current deal or an improved [version of that] agreement is wrong.”

In Washington, Kochavi will also discuss Israeli assessments of Iran’s regional entrenchment efforts. He also plans to highlight the destructive activities by Iran taking place all over the Middle East, including Syria, the southern Arabian Peninsula, Lebanon and Gaza, according to a source.

“He will share situational assessments, underline the threats, discuss what disturbs Israel and how Israel plans to act,” said the source, and “share Israel’s recommendations.”

A second objective of the visit is to continue to strengthen the relationship between the Israeli and American military leaderships. The already strong relationship has seen the two military establishments cooperate closely on force build-up—the joint development of combat systems, equipment, research and development, doctrines and techniques. This has seen the IDF work closely with the U.S. Marines, Navy, Air Force and Army.

The second aspect of the military alliance is force activation. Kochavi is set to hold in-depth discussions on how Israel can integrate into the U.S. Military’s CENTCOM (Central Command) area of responsibility after the Pentagon decided to shift it there and away from EUCOM (European Command).

The transition from EUCOM to CENTCOM is not yet complete. Kochavi is scheduled to visit CENTCOM’s main headquarters in Tampa, Fla., which represents the first time a serving Israeli chief of staff has visited the site.

According to the military source, this is essential for the future coordination of operational activity, such as flights and intelligence efforts in the face of multiple rivals in the area.

According to observers such as the Jewish Institute for National Security of America (JINSA), the move to CENTCOM can also lead to the creation of a new regional missile defense work with shared early warnings and steps to torpedo Iranian trafficking of weapons to proxies, which is a danger to Israel, U.S. forces in the region and pragmatic Sunni states alike.

‘Most of this work is ongoing’

Finally, a third key objective of the visit is to share lessons with the Americans on IDF lessons learned from “Operation Guardian of the Walls” last month against Hamas and Palestinian Islamic Jihad entrenched in the Gaza Strip.

It is clear to the IDF that as it learns and shares knowledge with partners, most of all the United States, Hamas is doing the same, sharing information with the Iranians, who will then spread the lessons to terrorist proxies in Iraq and Syria—a development that can influence American forces.

“Our goal is to share our lessons with the Americans, to assist with our experience and to learn from their experience,” said the source. “Most of this work is ongoing all the time with CENTCOM, the U.S. Air Force, the Navy, the U.S. Special Operations Command, but this takes on a new seal of approval with the chief of staff doing it,” said the source.

Kochavi will also talk with elected American defense officials, including Defense Secretary Lloyd Austin, as well as Gen. Mark Milley, the chairman of the U.S. Joint Chiefs of Staff. His meetings with American intelligence organization chiefs, including the NSA, will be highly significant in discussions on Iran.

Kochavi will also discuss the details of the key American decision to replenish Iron dome interceptor missiles and other munitions.

During his visit, Kochavi will also take time to address American military cadets at West Point.

“Kochavi will express the alliance, the partnership and the ethical bond that the IDF has with the American armed forces,” said the source. “It is also an expression of the recognition and esteem for the American support of Israel.”