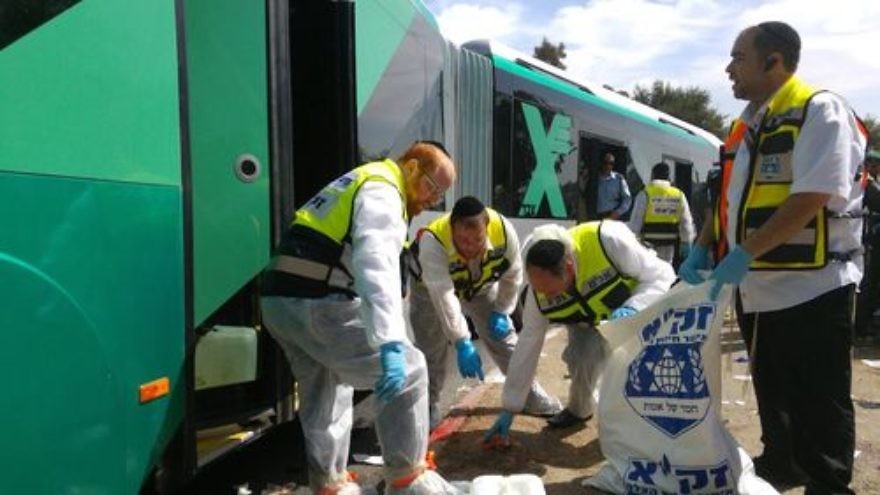 In the midst of the ongoing wave of Palestinian terror attacks against Israelis, a controversy has brewed with regard to how Emergency Medical Services (EMS) organizations decide whom to treat first on the scene of an attack. The firestorm began after Eli Bin, director general of Israel’s Magen David Adom (MDA) emergency response group, said that paramedics could choose to treat injured Palestinian terrorists before treating Jewish Israeli victims with lighter wounds.

“When I see my enemy wounded I no longer treat him as a terrorist, but as a human being. He has surrendered; he no longer poses a threat, so I’ll treat him,” Bin told the Tel Aviv-based radio station 103FM.

Criticism of Bin’s remarks has ranged from a social media user writing that “a terrorist has essentially already forfeited his life by deciding to carry out an attack” to Member of Knesset Bezalel Smotrich (Jewish Home) telling Israel’s Channel 10 that such a decision is “inconceivable.”

“Yes, we are a very compassionate people. If those who come to murder us do not succeed at first, we will nurse them back to health so that they can try once again to carry out their self-declared goals. And we call that sanity!” wrote Rabbi Benjamin Blech, a Talmud professor at Yeshiva University, in an op-ed titled “The insanity of treating terrorists” for Israel National News.

Paramedic Yoni Yagodovsky, currently the director of the international and fundraising department at MDA and formerly the director of MDA’s Jerusalem region during the second intifada, told JNS.org that when MDA is “treating a patient, even if we know he’s a terrorist, of course every one of us has his own emotions about it. But we are there to provide medical treatment.”

But in reality, how often does a clear-cut choice between providing first treatment to a terrorist or a victim actually exist?

MDA treats patients based on the PreHospital Trauma Life Support (PHTLS) guidelines, which educate on the principles of caring for trauma patients in the field, along with some additional Israeli guidelines. The PHTLS system was founded in the U.S. by the National Association of Emergency Medical Technicians (NAEMT) and is now an educational program available to EMS providers in 47 countries, including Israel.

In basic terms, MDA strives to establish a triage system in which anyone with life-threatening injuries is “receiving the treatment first,” Yagodovsky said.

During a terror attack, however, police officers will first deal with any dangerous people at the scene until they are no longer a threat.

“Until we get clearance to approach a terrorist from the police, we do not approach,” and in the meantime, “we are treating others,” said Yagodovsky.

Dr. Peter Pons, associate medical director for the NAEMT’s PHTLS program, elaborated on how EMTs operate in situations of terrorism or an active shooting for example. A triage system is essentially “a method of determining the priority for treatment and transport,” he told JNS.org.

EMTs are trained to look for whether an injured victim is breathing, what his pulse is, what his mental state is, and what other injuries the victim may have, in order to determine how to prioritize the treatment of all those injured on the scene.

During the last four decades in the U.S., EMTs and paramedics have been largely trained not to enter a scene of a violent attack until it has been rendered safe. But as a result of mass shooting incidents like at Sandy Hook Elementary School in Connecticut, in recent years the training paradigm has shifted to telling law enforcement and EMS organizations that “in fact they have to enter scenes a whole lot sooner than they typically have,” said Pons.

While this policy hasn’t been fully implemented everywhere in the U.S., these days the training stipulates that responding police officers should “no longer set up a perimeter and wait for the SWAT team,” Pons said.

“In fact they are assigned to enter the scene…[and] go to engage the attacker with the intent of neutralizing [him]….When EMS arrives, they will enter that scene along with the next arriving police officers as a sort of a second wave team,” he said.

Furthermore, the new guidelines advise that police need to not only be responsible for the criminal aspect of an incident, but also must be trained to provide initial lifesaving care before EMS arrives on scene.

In Israel, however, a unique situation has arisen in that MDA—the country’s national EMS organization—is actually being aided by other EMS groups. If those volunteer groups happen to arrive on the scene of terror attacks earlier than MDA, they begin immediate assessment and treatment. Eventually, they continue to work under MDA’s guidance at the scene.

One of those organizations is United Hatzalah (Hebrew for “rescue”). Daniel Katzenstein, who is in charge of content and donor relations for Hatzalah and works as a volunteer EMT with the group, told JNS.org that United Hatzalah volunteers try to “stabilize the patients, deal with any traumatic bleeding, deal with life-threatening injuries” until the ambulance arrives through a system also based on the Israeli Ministry of Health’s additional instructions for the PHTLS guidelines on triage and treatment.

Katzenstein, who was at the scene of several recent terror attacks in Jerusalem, said that “the general rule of [providing treatment for] mass casualty incidents…is ‘the greatest good to the greatest amount of people.’”

Pons reiterated this point, saying that “when resources are limited and you have more victims than you have resources, that’s a decision that has to be made.” The decision to treat any patient, whether terrorist or victim, can often depend on this principle rather than on a moral choice.

But in fact, explained Katzenstein, usually by the time the scene is secured by the police, “we’ve already been up and down through the ranks treating everyone who needed to be treated,” and “by the time that [the terrorist] is freed for treatment, we already have enough resources on scene…to help all the people who need help, and it’s not going to be a victim-versus-terrorist dilemma. That’s the reality.”

Mati Goldstein—a longtime volunteer for another EMS organization in Israel, ZAKA (a Hebrew abbreviation for “Zihuy Korbanot Ason” or “Disaster Victim Identification” in English)—was the first to arrive at the scene of a recent shooting and stabbing attack on a bus in Jerusalem’s Armon Hanatziv neighborhood. Since today’s Israeli first responder system is so effective, “in about two to three minutes there are more paramedics and EMTs on the scene than people who need help,” said Goldstein, meaning that usually everyone who needs treatment gets treated simultaneously.

In the wake of the criticism being leveled MDA, ZAKA Director Yehuda Meshi Zahav clarified, “You always have to deal first with those who are more severely wounded and this is a very difficult question.” At the same time, Zahav said ZAKA instructs its volunteers “to first take care of all Jews, because they were harmed just because they are Jews, while the terrorist murderer is deserving of death,” Israel National News reported.

Despite the medical code of ethics, “we need to know that there is also a limit to morality,” said Zahav.

Goldstein, head of the ZAKA International Rescue Unit, said he believes Zahav’s message “is right.” Yet Goldstein’s experience in the field as an EMT dictates that this is a choice that rarely needs to be made.

“No one [actually] takes care of the terrorist [first],” Goldstein told JNS.org.

Similarly, in the scenario of an active shooting in the U.S., Pons explained that “most of the time the active shooter typically either kills himself or is killed by law enforcement. Occasionally he will be wounded, [but] some of the time he will be gone from the scene, so it’s not a decision we’ve had to make often.”

Pons understands why this question gets “people upset” and that it is “an issue of controversy,” but when this choice does arise on rare occasions, he said that “what we tell our paramedics is, ‘It’s an ethical issue. You have a victim. Whether that victim is the assailant or the victim of the assailant, your goal should be the same in terms of prioritizing their care.’”

“Having said that,” said Pons, “if it is a perpetrator, you need to be sure that risks to yourself have been appropriately dealt with. Because you don’t want a terrorist, for example, to end up in your ambulance and then blow up the ambulance or attack you.”