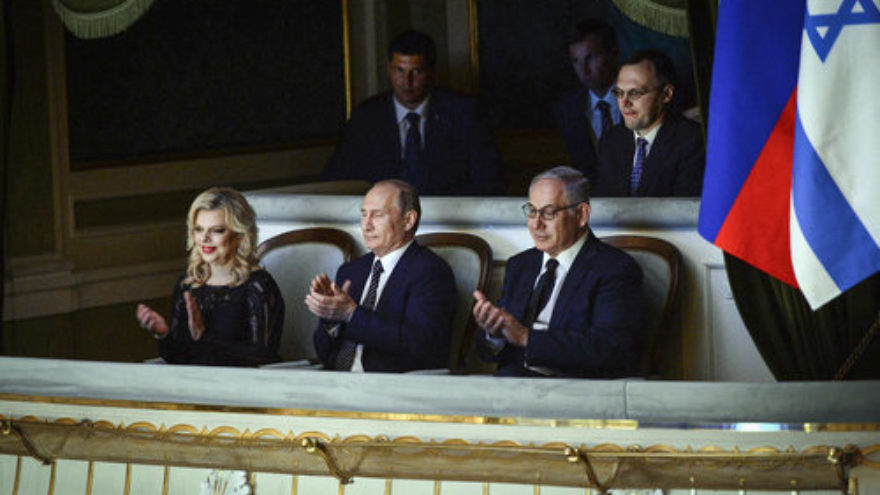 (January 26, 2017 / JNS) Israel’s relations with Russia remain friendly and pragmatic, yet simultaneously full of tension, in the early days of America’s Trump era.

Following President Donald Trump’s campaign rhetoric on seeking rapprochement with Russia, his administration signaled Jan. 23 that it would be open to cooperating with Russia in the fight against Islamic State in Syria. A U.S.-Russia deal over the Syrian civil war would likely keep Syrian President Bashar al-Assad in power, and would work to defeat Islamic State and al-Qaeda. But an agreement may also leave many issues unresolved. In return for battling Islamic radicalism, the U.S. would be expected to make the concession of allowing Russia to maintain its sphere of influence in Ukraine and other former Soviet states.

A measuring stick for shifting American-Russian ties could be the positive working relationship between Israel and Russia, despite the disagreements in the latter relationship over Moscow’s military presence in Syria as well as Russian support for Israeli enemies like Iran and Syria.

Zvi Magen, a senior fellow with the Tel Aviv University-affiliated Institute for National Security Studies and a former Israeli ambassador to both Ukraine and Russia, wrote this month that it is “likely that measures will be taken early in the new [Trump] administration’s term by both Russia and the United States to reduce the tension between them, including through reciprocal concessions. If this happens, this trend will leave its mark on the Middle East.”

Magen classified Russia-Israel relations as positive, with a number of high-level meetings between the countries taking place during the past year. Israel continues to act freely in Syrian airspace despite the Russian presence in the Arab country, and the Jewish state understands and accepts that Moscow’s interests do not always align with Jerusalem’s priorities.

Yet there are key differences between the Israeli-Russian and American-Russian relationships, with important factors including the balance of power among the nations and differences in values. While Russia is a much larger country than Israel and a more powerful player on the world stage, the spheres of influence of the U.S. and Russia are more equal; although the U.S. is still perceived as more powerful than Russia, Trump argued during his campaign that Russian President Vladimir Putin has been a stronger leader than now-former President Barack Obama.

In his country’s relationships with both Israel and America, Putin’s behavior is dictated by realpolitik and has little to do with common ideals or ideology. On the other hand, U.S. foreign policy has traditionally been influenced by human rights concerns. Trump’s policy, however, could become more realist and transactional—similar to Putin’s way of operating.

Anna Borshchevskaya, the Ira Weiner Fellow at the Washington Institute for Near East Policy and an expert on Russia’s Middle East policy, told JNS.org that she does not see how the Russia-Israel relationship could be a model for a U.S.-Russia relationship.

“The Russia-Israel relationship is not an equal one,” she said. “Putin is in the dominant position in the relationship. While Putin did bring Russia closer to Israel over the years, it was always for purely pragmatic reasons.”

Russia’s support for Assad and Iran goes against Israel’s national interests, but “Putin does what is best for him to stay in power,” said Borshchevskaya.

For Putin back at home, she continued, any agreement over Syria needs to be perceived as a victory for Russia and a loss for the U.S.

“Putin is hoping Trump will lift [U.S.] sanctions [against Russia] in exchange for cooperation in Syria—this is what Putin wanted for a long time,” Borshchevskaya said, explaining that such negotiations could also result in Trump abandoning the Obama administration’s policy of opposing Russian military intervention in Ukraine.

The Obama and George W. Bush administrations both pursued rapprochement with Russia, but never succeeded, and Borshchevskaya expressed doubt that a U.S. reset with Putin under Trump would last for long.

Yuri Teper, an expert on Russia and a postdoctoral fellow at Hebrew University of Jerusalem, told JNS.org that Israel’s relations with Russia “it seems, for the most part, are handled with mutual understanding of each other’s interests.” But Teper noted that those relations could be warmer if Russia would stop cooperating with Iran, Hamas and Hezbollah. Further, Russia supports some anti-Israeli international initiatives “not because they hate us or truly believe in the peace process, but because they think this suits their goals in the Arab world,” said Teper.

At the same time, Russia understands Israel’s regional perspective and turns a blind eye when the Jewish state carries out airstrikes against Hezbollah in Syria.

Asked how he views relations between the Trump administration and Russia, Teper said that “there is room to find a common ground, but also more chances for a serious conflict.”

“Russia needs America as an adversary for domestic political reasons, and their international activity might intensify exactly because of their aggravating domestic problems,” he said, adding that he can envision a short honeymoon between the two powers before tensions arise.

If U.S.-Russia relations do turn sour, Teper suggested that the Trump administration “could be even stricter in forcing Israel to toe the line in its foreign policy with Russia.”