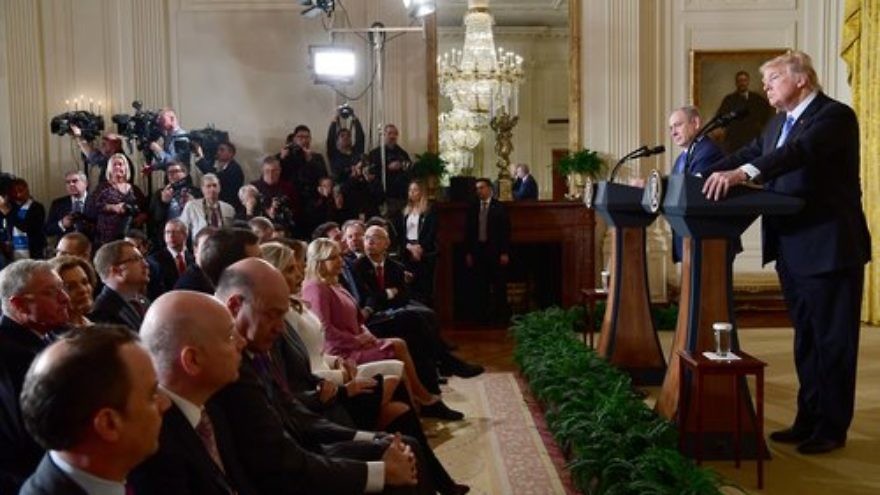 (February 15, 2017 / JNS) President Donald Trump and Prime Minister Benjamin Netanyahu held their first joint press conference Wednesday at the White House, ahead of a private meeting that was expected to herald warmer ties between the Israeli and American administrations. Yet the leaders’ public comments highlighted some of their disagreements, with Trump calling on Israel to “hold back” on settlement building and to show more “flexibility” in negotiations with the Palestinians.

“I’d like to see you hold back on settlements for a little bit,” Trump told Netanyahu.

“As with any successful negotiation, both sides will have to make compromises,” he added, before turning to Netanyahu and saying, “You know that, right?”

Trump’s comments follow previous calls by his nascent administration for Israel to halt the expansion of settlement building. In a Feb. 10 interview with Israel Hayom, Trump said he believes settlements “don’t help” the peace process. White House Press Secretary Sean Spicer said Feb. 2, “While we don’t believe the existence of settlements is an impediment to peace, the construction of new settlements or the expansion of existing settlements beyond their current borders may not be helpful in achieving that goal.”

Since Trump took office Jan. 20, Israel has announced plans to move forward with thousands of new homes in Judea and Samaria, and some members of Netanyahu’s governing coalition have called for Israel to annex settlement blocs. Trump’s administration was expected to take a softer stance on settlements than the preceding administration of President Barack Obama. Following higher-than-usual tension between the U.S. and Israel during the Obama years, Trump told Israel Hayom in the recent interview, “I don’t want to condemn Israel….I understand Israel very well, and I respect Israel a lot, and they have been through a lot.”

“The exchange between Trump and Netanyahu on settlements was a clear indication that the two men may not necessarily see eye to eye on everything,” Mideast expert Jonathan Schanzer, vice president of research at the Foundation for Defense of Democracies think tank, told JNS.org. “But it would be a mischaracterization to call that exchange contentious. From all appearances, the two leaders seemed to be at ease with one another. Any serious disagreements the two may have are likely to be aired behind closed doors. This is the way allies typically interact, but that was not how things worked during the Obama years.”

Trump also spoke Wednesday about helping the Israelis and Palestinians reach a peace deal, but argued that the result will ultimately be up to the parties themselves.

“The United States will encourage a peace, and really a great peace deal. We’ll be working on it very diligently. But it is the parties themselves who must directly negotiate such an agreement,” he said.

The president said Israel needs to “show some flexibility” and to “show they really want to make a deal,” while the Palestinians need to “get rid of some of the hate that they’re taught from a very young age.”

Notably, Trump seemed to break with decades of U.S. foreign policy by not firmly committing to support for a two-state solution, saying that he will agree with whatever plan the Israelis and Palestinians prefer.

Netanyahu, who has been pressured by some members of his governing coalition to back away from the two-state solution, repeated his previous demands that the Palestinians recognize Israel as a Jewish state and end terrorism and incitement, while allowing Israel to retain its security control west of the Jordan River. If those conditions are not met, said Netanyahu, “we will get another radical terrorist state.”

The Israeli leader spoke about focusing more on a regional approach to the conflict, and touted Israel’s improving relations with Arab neighbors in the fight against radical Islamic terrorism.

“This change in our region creates an unprecedented opportunity to strengthen security and advance peace,” he added.

Trump mentioned the mutual American-Israeli opposition to Iran’s nuclear program, saying, “I will do more to prevent Iran from ever developing—I mean ever developing—a nuclear weapon.”

Regarding the potential move of the U.S. Embassy in Israel from Tel Aviv to Jerusalem, a campaign promise that Trump made last year, the president took a more cautious approach. He said he is still “studying” the embassy issue.