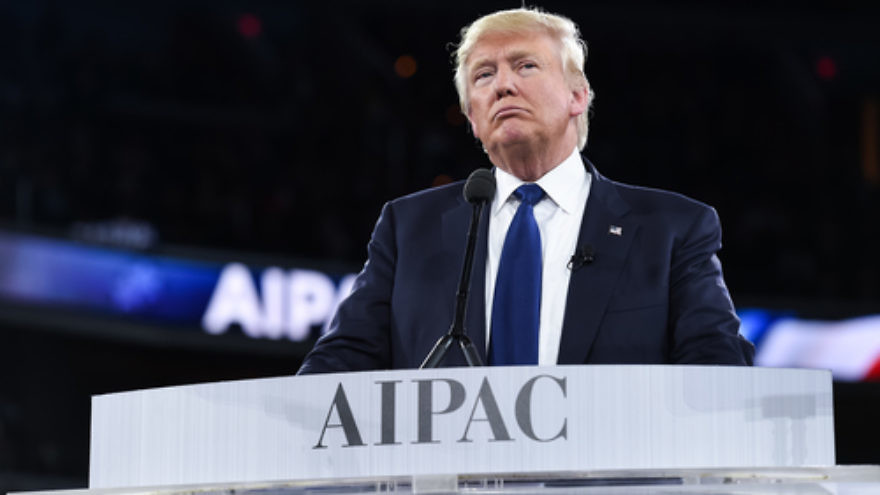 (March 21, 2016 / JNS) In a much-anticipated speech to the American Israel Public Affairs Committee (AIPAC) conference on Monday, Republican presidential primary front-runner Donald Trump said that dismantling the “disastrous” Iran nuclear deal would be his top priority as president. Trump also unveiled a three-pronged strategy for dealing with Iran, offering the type of detailed policy talk that many critics have accused him of leaving out of previous speeches.

“We’ve rewarded the world’s leading state sponsor of terror with $150 billion, and we’ve received actually nothing in return,” he said.

Trump was warmly received by the AIPAC crowd after being the subject of much pre-conference debate regarding whether or not the pro-Israel lobby should have invited him, due to his controversial policy proposals such as banning Muslim immigration. He earned far more cheers and laughter than boos during his speech, resulting from his jokes, his stylistic choices such as the repeated use of the phrase “believe me,” and his well-known propensity to make sweeping declarations. He told the crowd that he was speaking to them “as a lifelong supporter and true friend of Israel, and a newcomer to politics, but not to backing the Jewish state.” He noted that in the spring of 2004, at the height of the violence of the second Palestinian intifada, he served as grand marshal of New York City’s Israel Day Parade.

“Many people turned down this honor” because it was a dangerous time for Israel and its supporters, said Trump, but “I did not. I took the risk, and I’m glad I did.”

“But I didn’t come here tonight to pander to you about Israel,” he told the audience. “That’s what politicians do. All talk, no action. Believe me.”

Instead, Trump said he came to speak about future of America’s relationship with Israel, which he praised as “the only democracy in the Middle East.”

Trump said he has studied the Iranian nuclear issue “greater than anybody else. Believe me.” That statement earned significant laughter from the audience.

The nuclear deal “places limits on [Iran’s] military nuclear program for only a certain number of years,” but once that period expires, Iran will have a weaponized nuclear program “ready to go,” said Trump.

The businessman said he would adopt a three-pronged strategy on Iran as president: standing up to Iran’s aggressive push to destabilize and dominate the region, dismantling Iran’s global terror network, and vigorously enforcing the terms of the nuclear deal.

“We must enforce the terms of the previous deal to hold Iran totally accountable, and we will enforce it like you’ve never seen a contract enforced before folks, believe me,” he said.

Trump lamented that the nuclear deal is “silent” on the testing of ballistic missiles, a move Iran recently carried out in violation of U.N. Security Council resolutions.

“Nobody has done anything about it. We will, we will,” said Trump, earning a standing ovation.

“He may be the worst thing that ever happened to Israel, believe me,” Trump said.

Trump vowed to use American veto power in the United Nations to shut down an internationally imposed settlement for the Israeli-Palestinian conflict. “Deals are made when parties come together, they come to the table and negotiate,” while each side makes concessions and gets something of value, said Trump.

“It’s really the parties that must negotiate a resolution themselves, they have no choice…the United States will be useful as a facilitator in negotiations, but nobody should be telling Israel”  that it needs to abide by an agreement made thousands of miles away, he said.

Trump said that to make a good deal, you need two willing participants, and it is known that Israel is willing to negotiate a deal. He noted that former Israeli prime minister Ehud Barak made “maybe even too generous” of an offer to the Palestinians at Camp David, only to be rejected by Palestinian leader Yasser Arafat, while former prime minister Ehud Olmert made an “equally generous” offer in 2008 but was rejected by Palestinian Authority President Mahmoud Abbas.

As president, Trump said he would “meet with Prime Minister [Benjamin] Netanyahu immediately.” He said that in Palestinian society, “the heroes are those who murder Jews,” but that glorification of terrorists “will end and it will end soon, believe me.” He did not, however, offer details for how such incitement would end.

“What President Obama gets wrong about dealmaking,” said Trump, “is that he constantly applies pressure to our friends, and rewards our enemies.”

“When the United States stands with Israel, the chances for peace really rise, and rise exponentially,” he said.

Trump also vowed to move the American embassy in Israel “to the eternal capital of the Jewish people, Jerusalem.” He has previously wavered on that issue. He ended his speech on a lighter note, expressing pride that his daughter Ivanka, who is married to Jewish real estate developer Jared Kushner, “is about the have a beautiful Jewish baby.”

“In fact,” Trump said, “it could be happening right now, which would be very nice as far as I’m concerned.”