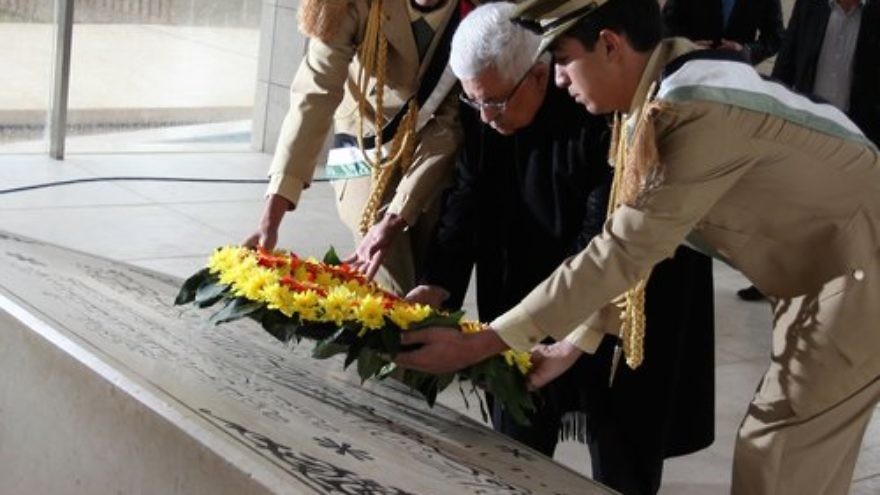 White House officials say they foiled a plan by the Palestinian Authority (PA) to have President Donald Trump walk near the tomb of Yasser Arafat when Trump visits Israel and the disputed territories later this month. Supposedly, the PA wanted to photograph Trump with the tomb in the background.

I wouldn’t put it past the PA to concoct a scheme of this nature. Staging photographs, faking photographs, lying about photographs—it’s all old hat for the PA. But keeping Arafat’s tomb out of the picture will not resolve Trump’s Arafat problem.

Last week, Trump embraced and praised Arafat’s loyal, longtime number two man, PA President Mahmoud Abbas. Let’s not play “good terrorist/bad terrorist.” Let’s not pretend Arafat was the bad guy, and all the rest of the Palestinian leadership is moderate and reasonable. If Arafat was a terrorist, so is Abbas. The late Yitzhak Rabin told me so.

Every one of the pro-terrorist policies Arafat carried out following the Oslo Accords was supported and facilitated by his number two man, Abbas.

The reason Arafat’s tomb is situated right smack in the middle of Abbas’s presidential compound in Ramallah is because Abbas worships his former leader and mentor.

And to this day, Abbas faithfully carries out Arafat’s policies.

Just like Arafat, Abbas shelters terrorists—he refuses to honor Israel’s 36 requests for the extradition of terrorists, even though the Oslo agreement obligates the PA to hand them over.

Just like Arafat, Abbas allows terrorist groups such as Hamas, the Popular Front for the Liberation of Palestine (PFLP) and the Palestine Liberation Front (PLF) to operate freely within the territory he controls.

Just like Arafat, Abbas permits groups that are on the U.S. list of terrorist organizations, such as the PFLP and the PLF, to remain part of the PLO, which Abbas chairs.

Just like Arafat, Abbas permits his own Fatah movement to engage in wild anti-Jewish incitement every day in its publications and social media.

Just like Arafat, Abbas calls mass-murderers “heroes” and “martyrs,” and names streets in their honor.

As the White House embrace demonstrated, President Trump has not yet come to grips with the reality that Abbas is no different from Arafat. And Trump’s policies are beginning to demonstrate the embrace was not just symbolic. According to news reports, the administration is increasing U.S. aid to the Arafat-created PA, even as its reduces foreign aid around the world.

Trump has spoken vaguely about the need for the PA to stop inciting terrorism, a practice started under Arafat and continued under Abbas. But the Trump administration has not taken any concrete steps to force Abbas to stop it.

Nor has the Trump administration demanded that the PA surrender any of the terrorists involved in the murders of 145 Americans since 1968. The administration did indict one Palestinian terrorist who resides in Jordan—but so far, U.S. officials are meekly acquiescing in Jordan’s refusal to hand over the killer for prosecution.

So yes, Trump has an Arafat problem—and the solution is going to require a lot more than eluding a sneaky photo in Ramallah.