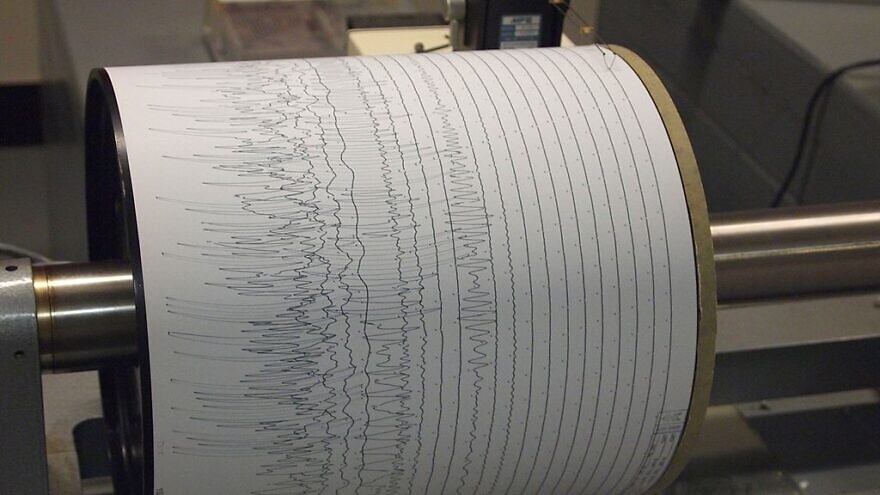 Illustrative image of a seismogram being recorded at the Weston Observatory in Massachusetts, on June 24, 2014. Credit: Wikimedia Commons.
Spread the word.
Help JNS grow!
Share now:

(February 16, 2022 / Israel Hayom) A pair of earthquakes that shook northern Israel on Wednesday and Tuesday prompted calls from local council heads to improve municipal and national readiness before disaster strikes.

Israel’s Geological Survey (IGS) reported that a magnitude 3.1 tremor shook the north on Wednesday morning, about 12 hours after a magnitude 3.5 earthquake was felt in the same area on Tuesday evening. The epicenter of the quakes was some 15 kilometers (9 miles) northeast of Beit She’an, according to the IGS.

The Israel Police said its emergency center received dozens of calls from residents in the area, adding that no injuries or damage were reported.

These quakes make for four tremors in the area in the span of less than a month: on Feb. 3, a magnitude 5.4 earthquake occurred in Cyprus and was also felt in Israel. 10 days prior, residents of Tiberias, Tzfat, Yavne’el, Haifa and the Krayot area in northern Israel reported feeling a 4.1 magnitude earthquake, the epicenter of which was 10 miles northeast of Beit She’an, south of the Sea of Galilee.

“When this area is struck by a major earthquake—and unfortunately, history has shown it will happen—none of the decision-makers in Israel will be able to say they were surprised by the disaster that will befall us. The writing is on the wall,” said Jordan Valley Regional Council Head Idan Greenbaum.

Earthquakes make for short-lived headlines, he continued, “then everyone moves on as if nothing has happened. There’s no real strategy or plan to reinforce buildings and no plan on how to save lives when catastrophe hits. It’s time the prime minister wakes up.”

Hatzor Haglilit Local Council Head Shimon Suissa called on the government to allocate a budget for reinforcing buildings in the city.

“Four earthquakes in less than one month is beyond a warning sign. I urge the State of Israel to allocate budgets immediately to strengthen the old buildings. History proves that once a century there is a significant earthquake. The last one was about 100 years ago. Let’s wake up and prepare in time and soon before it is too late,” he said.