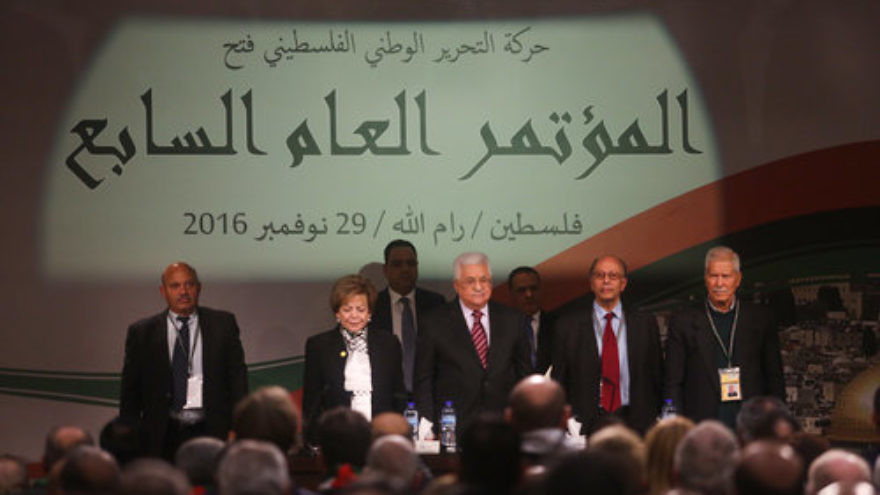 What happens in Ramallah this week could have a major impact on the prospects for Israeli-Palestinian peace. Gathering in the West Bank city that is the heart of the Palestinian government are more than 1,400 Fatah party members who were invited by Palestinian Authority (PA) President Mahmoud Abbas, the party’s leader.

Fatah’s congress opened Nov. 29. The party, founded in 1965 by Yasser Arafat and led by Abbas since his death in 2004, is supposed to convene its congress every five years. But this is only the party’s seventh such gathering, and it comes two years late. The sixth congress, in 2009, came after a 20-year hiatus.

Palestinian democracy moves slowly. After all, Abbas, first elected PA president in January 2005, is now in the 11th year of his four-year presidential term, with no successor apparent. He has also repeatedly delayed Palestinian local elections, most recently by securing a ruling from a Palestinian court that postponed by months the balloting that was originally scheduled for last month.

Arab commentators have been speculating that Fatah’s congress will choose a deputy to the 81-year-old Abbas—someone who could become his designated successor. Such an appointment would facilitate a smooth transition. Contenders include Mohammad Dahlan, the former Palestinian security chief in Gaza before the onset of the Hamas terror group’s rule there, and Arafat’s nephew Nasser al-Kidwa, a former Palestinian foreign minister and ambassador to the United Nations. Dahlan, after a falling-out with Abbas, went to live in exile in the United Arab Emirates.

Longstanding schisms within the Palestinian polity have adversely affected the development of institutions that will be needed for the envisioned Palestinian state and, indeed, for forging a consensus on negotiating the peace deal with Israel that is necessary to achieve a two-state solution.

In 2007, Abbas lost control of Gaza to Hamas, nearly two years after Israel had unilaterally left Gaza and transferred governance of the territory to the PA. Continuing strife between Fatah and Hamas impedes efforts to reconcile and establish a Palestinian unity government, and also hampers the possibility of making real progress towards a negotiated peace with Israel.

Despite the importance of Fatah’s congress, American media have given it scant attention. That’s unfortunate because it replicates the error of 2009, when media largely ignored the proceedings and outcome of the sixth congress. That meeting, like the current one, was an opportunity to reform Fatah, to make it more attractive to Palestinians than Hamas, and to present a platform advancing peace.

Hope for positive change was short-lived seven years ago. The 2009 congress concluded with support for armed resistance in all its forms, and opposition to peace talks by demanding impossible preconditions from Israel. Abbas has been consistent regarding talks with Israel—to avoid them if possible, and instead to lobby the U.N. and world powers to press Israel so that it will cave in to Palestinian demands. Pointing accusatory fingers at Israel directs attention away from the internal problems and crises threatening Abbas’s rule.

Israeli Prime Minister Benjamin Netanyahu, during his U.N. General Assembly address in September, made yet another try at resuming peace talks by inviting Abbas to come to Jerusalem and address the Knesset. Abbas attended the funeral of statesman Shimon Peres, so he certainly knows how to get to Jerusalem from Ramallah. But Netanyahu’s invite remains unanswered.

Unless there is some dramatic development in Ramallah, the true obstacle to moving forward towards a comprehensive and sustainable Israeli-Palestinian peace will be tragically clear.