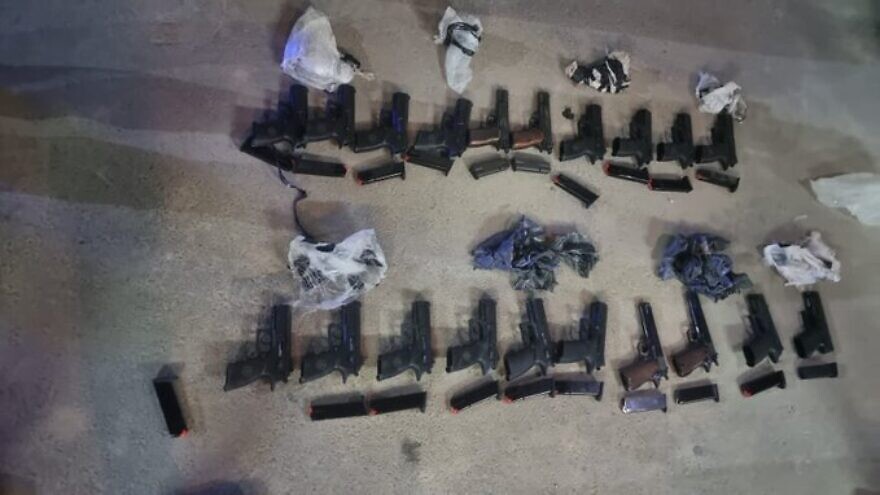 A shipment of handguns from Jordan intercepted by the Israel Police on May 1, 2022. Credit: Israel Police.
Spread the word.
Help JNS grow!
Share now:

(May 2, 2022 / JNS) The Israel Police arrested two suspects near Tel Arad on Sunday night who had been attempting to smuggle weapons from Jordan into Judea and Samaria, police said in a statement.

Twenty handguns were found during a search of the suspects’ vehicle, worth approximately $150,000, according to police. The suspects, both residents of Bethlehem, were due to appear before the Beersheva Magistrate’s Court on Monday.

Chief Superintendent Asaf Cohen of the police’s Magen Unit called the bust a “most significant” part of the ongoing struggle against the “scourge” of illegal weapons in the country.

On April 26, the Israel Defense Forces reported that Lebanon’s Iran-backed Hezbollah terror organization was running an extensive cross-border drug- and arms-smuggling network out of the apartment of a known drug trafficker in southern Lebanon.

On April 25, the Israel Police and IDF announced that they had jointly thwarted an attempt to smuggle a large shipment of weapons into the country from Jordan.

The suspect in that case, a 29-year-old resident of Jericho, was found in possession of 24 weapons, worth approximately $305,000, as well as approximately $115,500 in Jordanian currency, according to police.