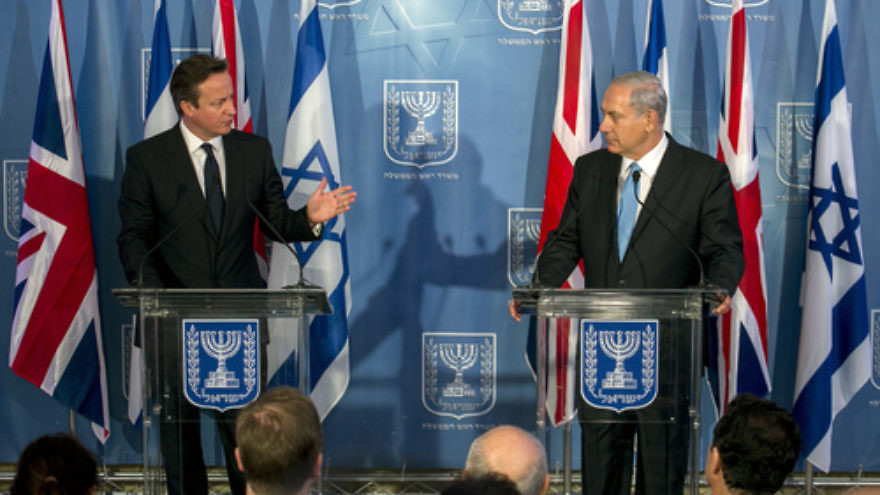 (June 24, 2016 / JNS) In a historic referendum on Friday, the United Kingdom voted to leave the 28-nation European Union (EU), sending shockwaves throughout Europe and the international community. The results of the so-called “Brexit” vote—52 percent in favor of exiting the EU and 48 percent opposed—call into question the identity and strength of the EU while leaving many nations, including Israel, wondering how the vote will affect policy and trade in the years ahead.

“There is no doubt that Israel will be left to follow the agreements that will be made between the United Kingdom and the European Union, and to adjust its economic and trade relations with Britain accordingly,” Eran told JNS.org.

According to Eran, major questions will be raised about what the vote means for the U.K. and for the ongoing strength of the EU. Following the referendum, opposition leaders in France and the Netherlands have hailed British voters’ decision, calling for similar referendums on EU membership in their countries.

“This is the dilemma that the European Union will face,” Eran said. “If Britain was a singular case, then this would be a simpler situation.”

According to Fiamma Nirenstein—a former Italian parliamentarian who served as vice president of the parliament’s Committee on Foreign Affairs and as a member of the Italian delegation to the Council of Europe—there are opposing views within Europe’s Jewish communities on the causes, outcomes, and potential consequences of the Brexit vote.

Nirenstein noted that one school of thought views the Brexit vote “as a sort of punishment for Europe” for growing anti-Israel and anti-Semitic sentiment.

“Over the past century, Europe has been so bad to the Jews,” Nirenstein told JNS.org. “And increasingly now, Europe is against Israeli actions, and Europe is seeing an explosion of anti-Semitism. So in the view of one camp, there is something wrong with Europe, and something needed to happen to demonstrate that, and the Brexit vote represents this.”

On the other side, Nierenstein suggested, is a second camp that views the Brexit vote negatively—“as an event that strengthens and empowers an illiberal right-wing sentiment throughout Europe,” a sentiment that is simultaneously anti-Semitic and anti-Islamic, and at its core anti-immigration.

“As a people that have ourselves been strangers in many lands, Jews have always identified with the value of welcoming the other. So this camp of Jews is against the [Brexit] vote,” said Nierenstein, who also served as chairperson of the International Council of Jewish Parliamentarians.

Nirenstein said that Muslim immigration was an unknown experiment that ultimately contributed to the U.K. exiting the EU. “The issue of immigration is not just a European issue, but it is connected to problems that are taking place on another continent,” she said.

Former ambassador Eran, who is currently a senior research fellow at Tel Aviv University’s Institute for National Security Studies think tank, said the vote raises questions as to whether or not Europe will be willing and able to affect policies and solve problems outside of its borders.

“I think that Europe in the next two years, if not longer, will be mostly engaged in Europe, and primarily engaged in external threats which are immediate,” Eran said.

“So I wonder if Europe will find the strength and stamina to deal with profound issues,” including those rattling the Middle East, he said.

For Israel, the vote comes against the backdrop of a French-initiated campaign to restart peace negotiations between Israelis and Palestinians. The EU has been increasingly critical of Israeli actions in recent years and recently passed a controversial regulation labeling products manufactured in Israeli settlements.

This coming week, Israeli Prime Minister Benjamin Netanyahu is headed to Rome to discuss renewed peace efforts with United States Secretary of State John Kerry, who is similarly supportive of the French effort. Israel has rejected the initiative, maintaining that peace negotiations must be handled between the Israelis and Palestinians themselves, and not thrust upon the parties by outside actors.

According to Nirenstein, the Brexit vote “will not have any effect on the renewed peace push.” She added that while Europe will remain a vital trade partner with Israel, even in light of the Brexit vote, “Israel doesn’t count on Europe for its future, and particularly for its long-term future.”

“As a union of 27 nations instead of 28, they will still pass anti-Israel resolutions, and Israel must still keep up its guard against the European Union. There is a need for Israel to look beyond Europe.” Nirenstein said.

“Israel is increasingly looking towards other markets—toward China, toward Russia, toward India,” she said. “Africa is a very good market. There is more of a possibility to expand Israeli trade and its culture of innovation. These emerging markets appreciate Israel very much….It’s no coincidence that Prime Minister Netanyahu is going to Africa in the coming weeks.”