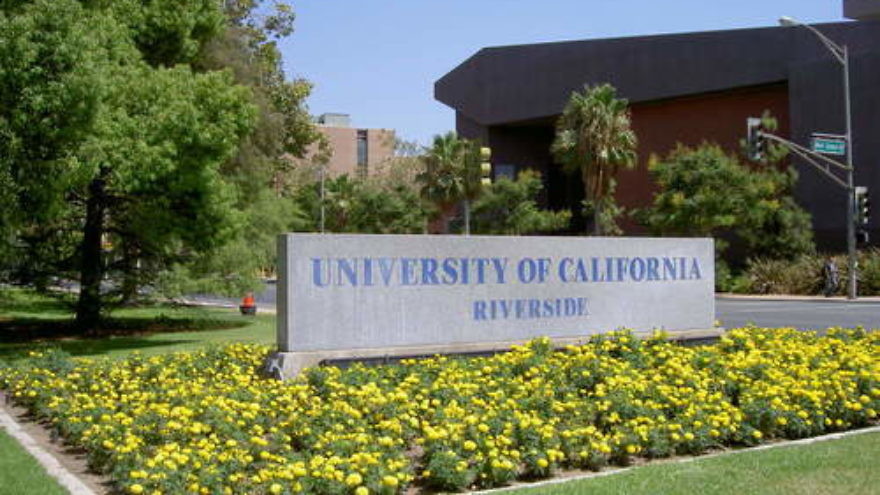 (May 13, 2015 / JNS) An independent analysis has confirmed the greatest fears of 20 watchdog and advocacy organizations who had expressed concern that University of California, Riverside (UCR) is offering a course that meets the U.S. State Department’s definition of anti-Semitism.

A preliminary report on the issue released last week by the non-partisan Verity Educate, a non-profit group that analyses the educational accuracy and objectivity of classroom curricula, determined that the UCR course “reflects a singular interpretation” of the Israeli-Palestinian conflict.

“Nearly every text presents Israel as an ‘occupying’ power and deems it morally repugnant and guilty of ‘settler-colonialism,’” Verity Educate said. “No other competing interpretations, arguments, or views are presented through the readings over the course of the semester.”

Verity Educate told the Salomon Center that it could not comment on whether the class actively promotes anti-Semitism, as the group is not “privy to the classroom experience.” But the organization did express that “some of the [course’s] written material, particularly Dr. Steven Salaita’s ‘Israel’s Dead Soul,’ raises extremely serious questions about whether the course itself contributes to anti-Semitism.” Other anti-Israel authors whose writings are used in the course include Edward Said, Ilan Pappé, Rashid Khalidi, and Ali Abunimah.

Kris Lovekin, UCR’s director of media relations, told the Salomon Center last month, “The course ‘Palestinian Voices’ was reviewed by a faculty committee here and that committee decided that it did meet UC standards.” Asked for comment on the new Verity Educate report, Lovekin said, “Our original statement still applies.”

Since news on the course surfaced, seven additional watchdog groups focusing on education and anti-Semitism—including Verity Educate—have joined the original 20 concerned parties to express their outrage over the class.

Anti-Semitism within the 10-campus University of California (UC) network is widely regarded as a growing epidemic. Jewish students at UC public universities have recently been targeted with Holocaust imagery and the questioning of their Jewish faith in student government hearings. The Boycott, Divestment and Sanctions (BDS) movement against Israel has resulted in Jewish students across the country feeling intimidated and fearing for their safety, with the Students for Justice in Palestine (SJP) group leading the anti-Zionist charge on campus through activity that is increasingly identified as anti-Semitic, not just anti-Israel.

According to the AMCHA Initiative education and anti-Semitism watchdog group, “Palestinian Voices” is taught by undergraduate student Tina Matar, leader of the SJP chapter at UCR. Matar authored what AMCHA called a “contentious” anti-Israel divestment resolution that was passed by the school’s student senate last year. The course’s faculty sponsor is English professor David Lloyd, an international leader of the BDS movement and founder of the U.S. Campaign for the Academic and Cultural Boycott of Israel.

“The course content was of particular concern due to the identical, political, and ideology bias evident in a vast majority of the material we examined,” Dr. Ellen R. Wald, executive director of Verity Educate, told the Salomon Center. “Most of the content assigned to students supported a particular line of radical political ideology. What is of special concern is that this line of thought is not contextualized or ‘balanced’ with any other radical and non-radical lines of thought on the subject. We call this process ‘shifting the spectrum of the argument,’ so that students come to see one argument as the mainstream of accepted view.”

“Also of special concern is the [course’s] focus on and promotion of activism,” Wald added. “In particular, students are assigned a ‘how to’ book on activism. The particular concern in this case is that the course is being used as a vehicle to recruit students to join specific activist groups on campus or nationally.”

Matar and Lloyd never returned requests for comment for the Salomon Center’s original report on the course.

Paul Miller is executive director of the Salomon Center for American Jewish Thought.