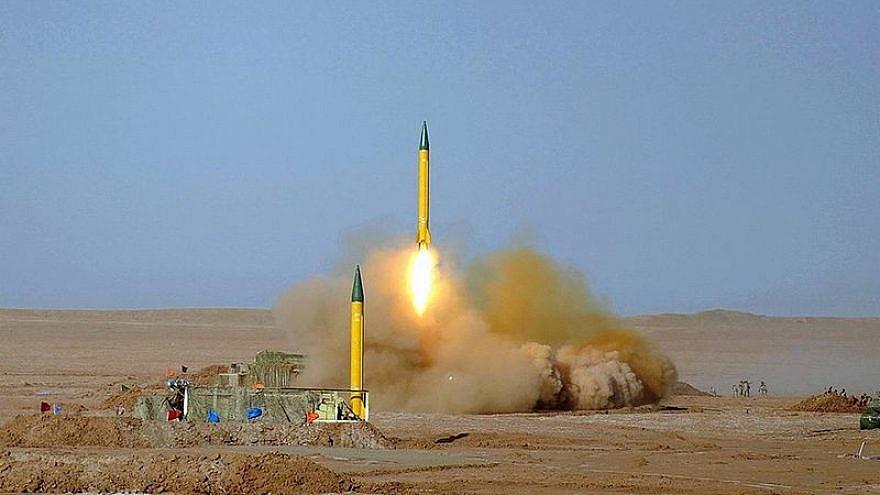 (December 5, 2019 / JNS) In a joint letter addressed to U.N. Secretary-General António Guterres that was released by the world body on Wednesday, ambassadors from the United Kingdom, Germany and France reiterated that Iran has developed nuclear-capable ballistic missiles.

The countries, all parties to the 2015 Iran nuclear deal, formally the Joint Comprehensive Plan of Action (JCPOA), listed four examples of the alleged activity, adding that “Iran’s developments of nuclear-capable ballistic missiles and related technologies is inconsistent” with U.N. Security Council Resolution 2231, which restricts the regime from doing so.

“Iran is believed to possess the largest and most diverse ballistic-missile arsenal in the Middle East, according to U.S. intelligence assessments, with a substantial inventory of close, short and medium range missiles that can strike targets throughout the region,” reported CNN.

“The Shahab-3 booster used in the test is a Missile Technology Control Regime category-1 system and as such is technically capable of delivering a nuclear weapon,” stated the letter.

In July, Iran test-fired a medium-range Shahab-3 missile in violation of a U.N. Security Council resolution. It was launched from southern Iran and traveled some 680 miles, coming down east of Tehran, according to reports.

The liquid-fueled Shahab-3 can reportedly deliver a nuclear weapon and has been referred to by Iranian officials as one of the country’s “Israel-hitting” missiles.

“Latest E3 letter to UNSG on missiles is a desperate falsehood to cover up their miserable incompetence in fulfilling bare minimum of their own #JCPOA obligations If E3 want a modicum of global credibility, they can begin by exerting sovereignty rather than bowing to US bullying,” he tweeted.

If E3 want a modicum of global credibility, they can begin by exerting sovereignty rather than bowing to US bullying. pic.twitter.com/QtfZFnLpO5

The letter came as there has been recent alarm from U.S. defense and administration officials of Iranian weapons and forces being moved to potentially attack U.S. forces.