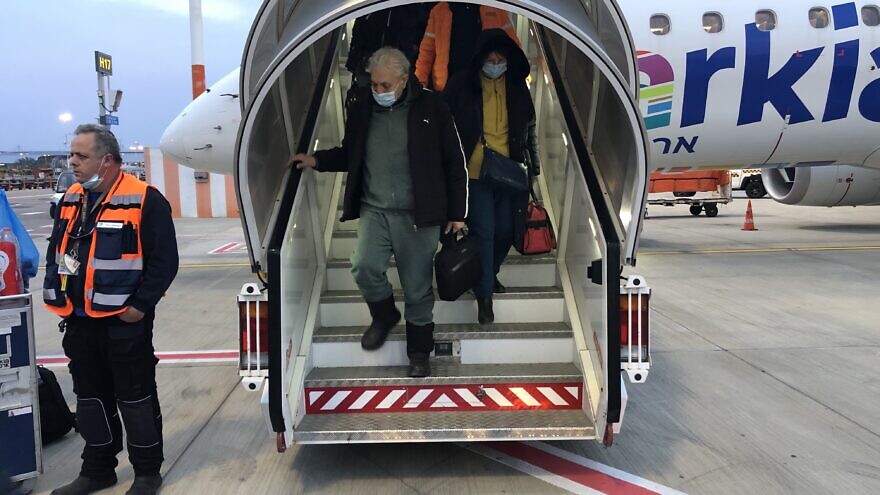 (March 8, 2022 / JNS) IAȘI, ROMANIA—Daria Garn was exhausted. After five grueling days traveling from war-torn Kyiv, Ukraine, through Moldova with her two young sons, she had finally arrived at the Romania International Airport in Iași, where she was waiting to board a flight to Israel. As tears welled, Garn, 29, told JNS she was forced to leave her husband behind as he had been unable to secure the proper paperwork to join her. Following Russia’s deadly invasion of Ukraine on Feb. 24, most Ukrainian adult males have been forbidden to leave the country.

Rubbing bloodshot eyes, Garn said that after 10 days of suffering through the bombings, she had decided that it was time to leave. “I’m so tired; I don’t eat, I don’t sleep—it’s like I don’t feel anything. I’m numb,” she said.

Garn and her children were joined at the airport by more than 100 other Jewish refugees who had secured seats on flights to Israel thanks to the United Hatzalah organization.

Monday night counted as Hatzalah’s third rescue mission in the past several days, as staff organized fully subsidized flights from Romania and Moldova. 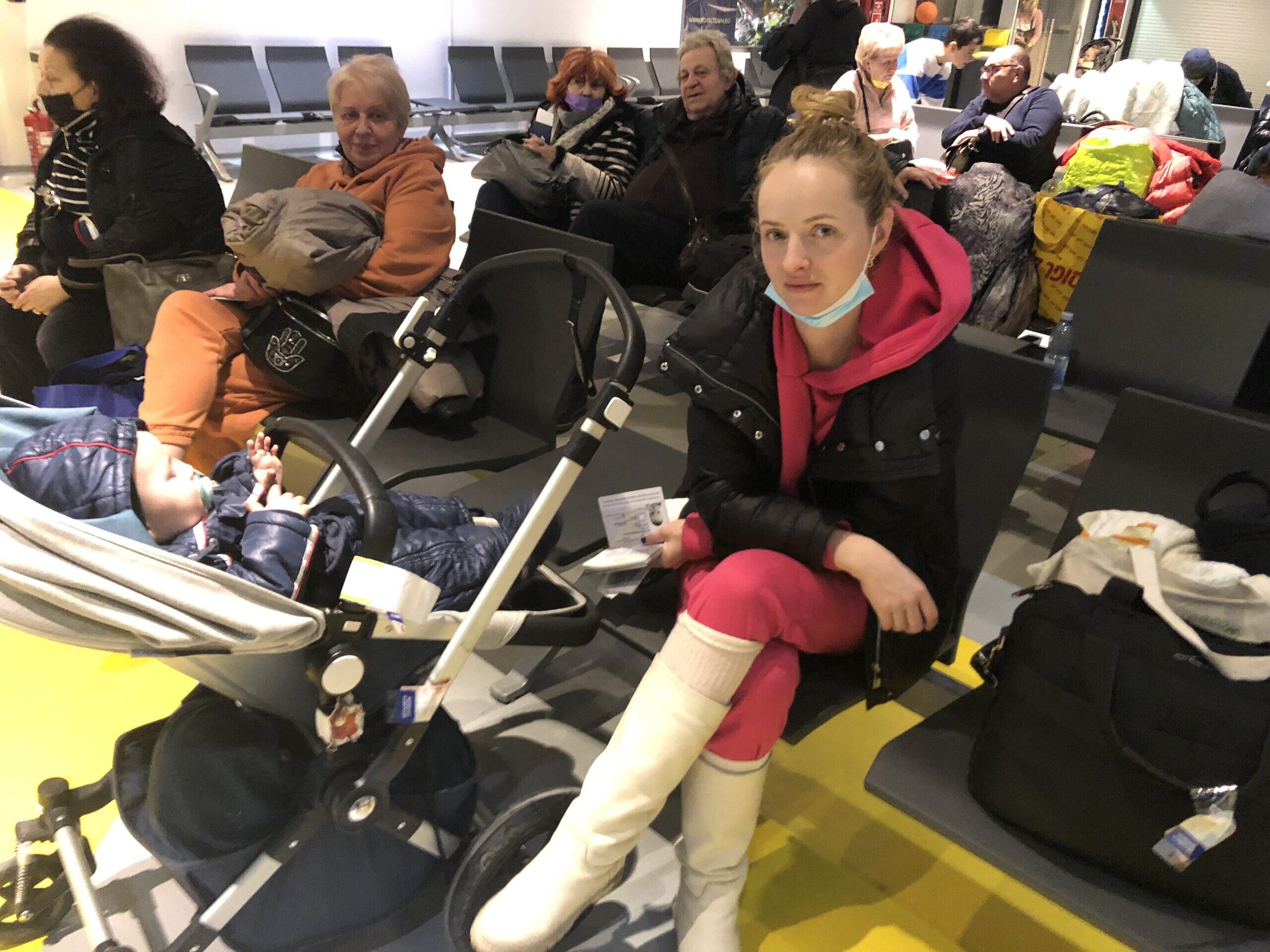 Ukrainian refugee Daria Garn waits together with her two children at the Romania International Airport in Iași to board a flight to Israel, on March 7, 2022. Photo: Josh Hasten.

In addition to saving Ukrainian Jews and stranded Israelis by getting them on a flight from Romania to Israel, 20 or so Hatzalah volunteers—including doctors, medics, EMTs, psychotrauma crisis experts and even medical clowns—traveled from Israel to Romania on their way to Hatzalah’s emergency operation center in Kishinev, Moldova. There, they will offer treatment and their expertise to those in need.

The new volunteers will join more than 55 others currently stationed at the center, which also serves as the rally point for those Jews and Israeli citizens seeking safety in Israel. Maisel said that as many as 500 people are on a waiting list to come to Israel—and the list is growing. 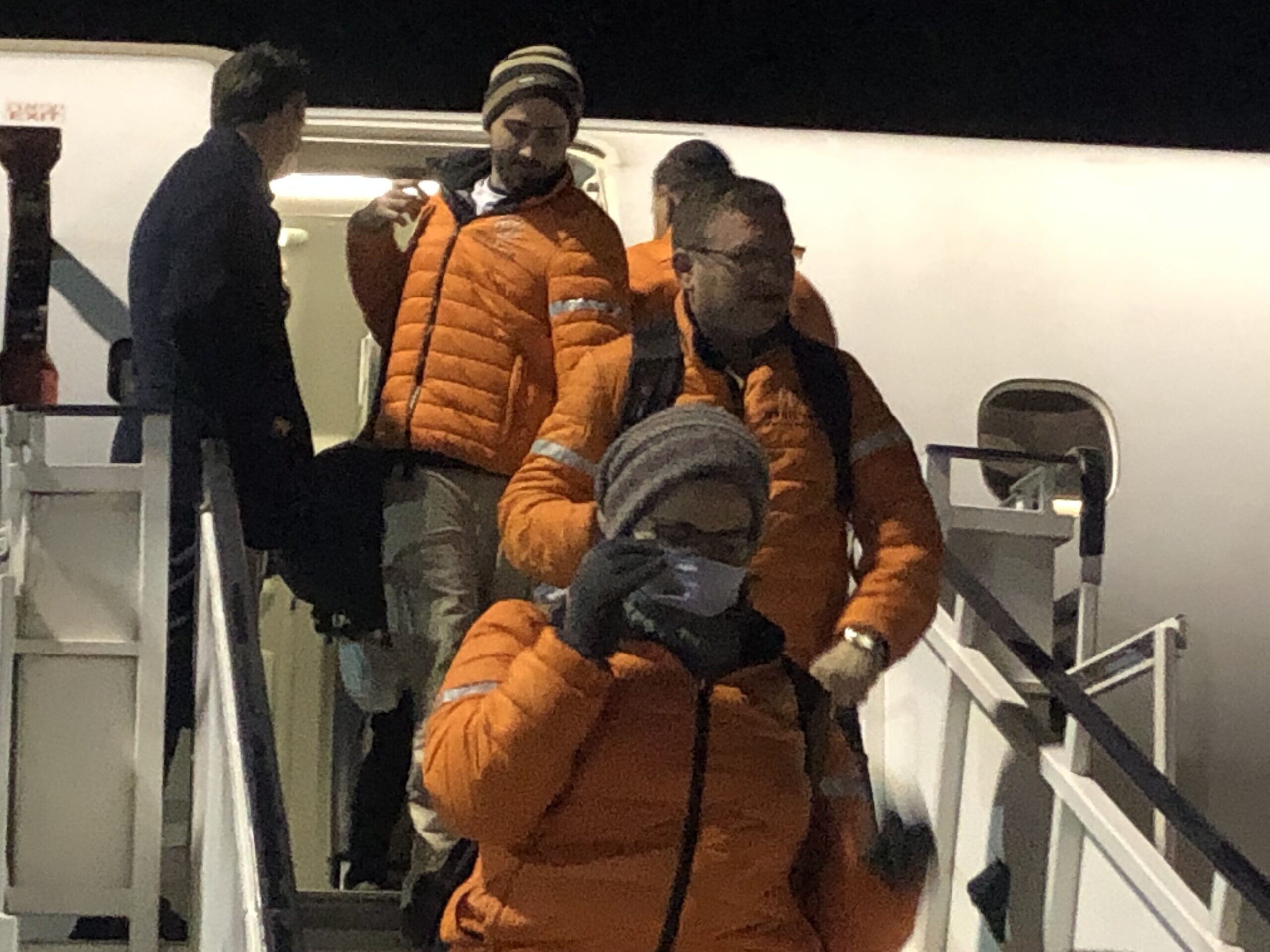 The third aspect of the operation, he explained, was that “the belly of the plane is full of a few tons of equipment, including medical supplies, food, toys for children, baby formula, diapers, warm clothing and other humanitarian aid.”

The medical equipment, he said, was being sent to the emergency operations center in Kishinev, and “from there, it will be distributed to several spots on the borders, where our staff will also be carrying out their work to assist those fleeing the Ukraine.”

‘We don’t understand why this war is happening’

Back at the airport in Iași, 40-year-old Yevhen Mukhin, a resident of Ashkelon, Israel, was sitting near the departure gate with his mother and grandmother, both of whom had escaped from Kyiv. He told JNS that when the war broke out, he had tried to figure out a way to get his family out of Ukraine. Mukhin’s father, he said, had succeeded in getting the two women out through Moldova by car, and eventually to the airport. Mukhin met his mother and grandmother in Iași to escort them on the last leg of their trip, as his father had needed to travel to Poland, he said.

His grandmother—the only member of the family without Israeli citizenship—had decided to settle in Israel permanently upon her arrival, he said.

Alexandra Potapova, 28, an Israeli citizen born in Ukraine and currently living in Rishon Lezion, was visiting her mother in Kyiv when the war broke out. She told JNS that a Russian rocket had landed very close to her mother’s house, which is located in a residential neighborhood. Russian President Vladimir Putin has claimed “he was only targeting military sites. But that’s a lie. He is clearly aiming for civilian areas,” she said.

Potapova, who at one time worked for the Jewish Agency for Israel, began frantically making calls to find a way out of the country for her mother (who isn’t an Israeli citizen) and herself. After many dead ends, she discovered the Hatzalah emergency operation center in Kishinev, and the pair made a 24-hour journey to reach the center, where they were booked for the flight. She said the trip took so long because of all of the chaos at the border, which caused a lengthy delay getting into Moldova.

Potapova said her mother has no intention of going back to Ukraine and plans on making aliyah.

She added that she is a proud, fifth-generation Jew from Kyiv and that 20 members of her family were murdered at Babi Yar during the Holocaust, along with more than 33,000 other Jews.

“We don’t understand why this war is happening,” she said. “Why is Putin bombing Kyiv? Doesn’t the president have enough to worry about with so much poverty in Russia?” she asked. “He should leave Golda Meir’s birthplace alone,” she said emphatically, referring to the late Israeli prime minister.

‘We saw there was a crisis, so we went’

There was complete silence inside the plane as the flight to Israel lifted off from Romania at 3 a.m.; the refugees were getting some much-needed rest. The plane entered Israeli airspace just as the sun was rising; upon touchdown, the refugees let out thunderous applause. 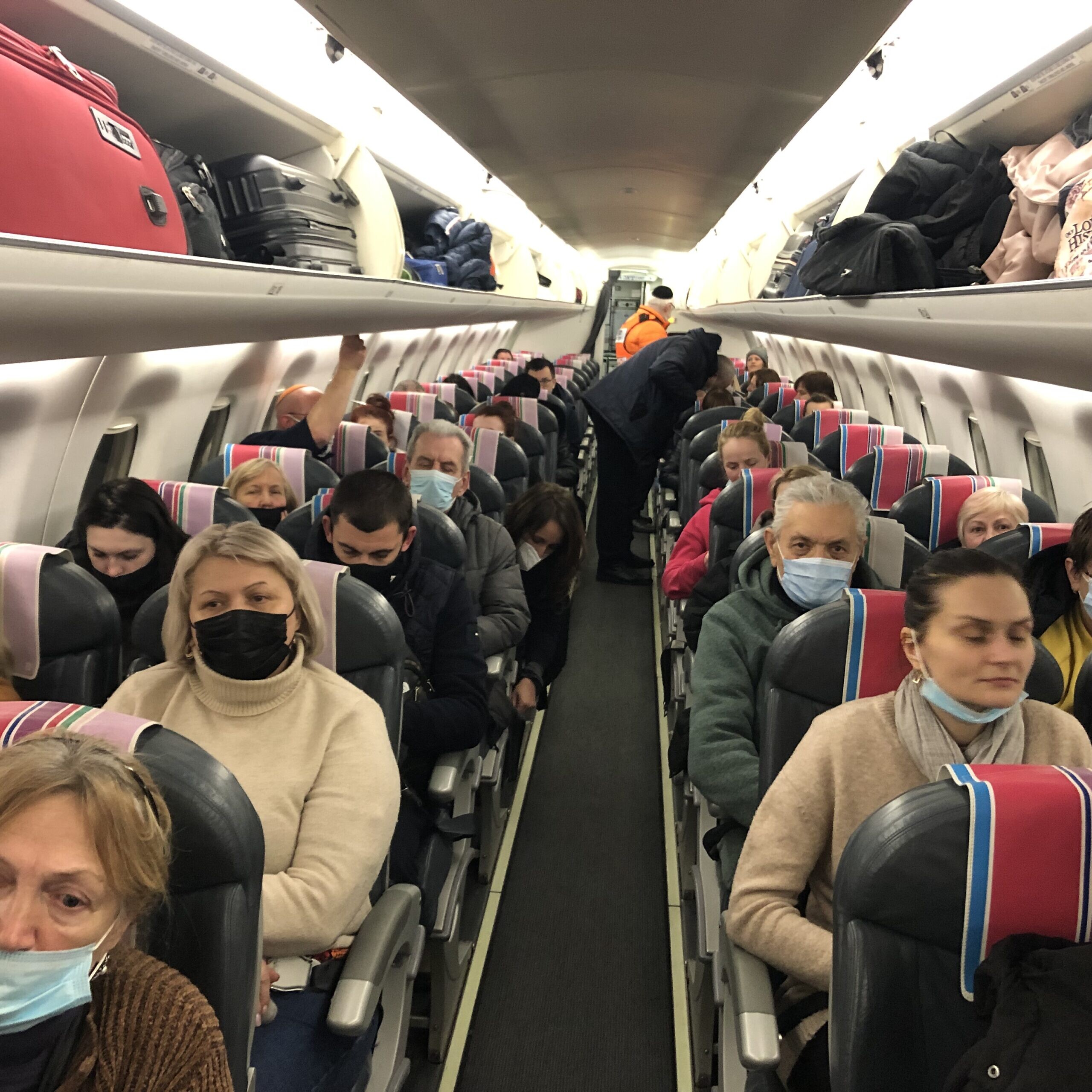 Ukrainian refugees on their way to Israel from Romania, March 7, 2022. Photo: Josh Hasten.

Some plan to ride out the war with their families in Israel. Others plan to stay for good.

For United Hatzalah, it’s back to preparing for the next rescue missions in the days ahead. 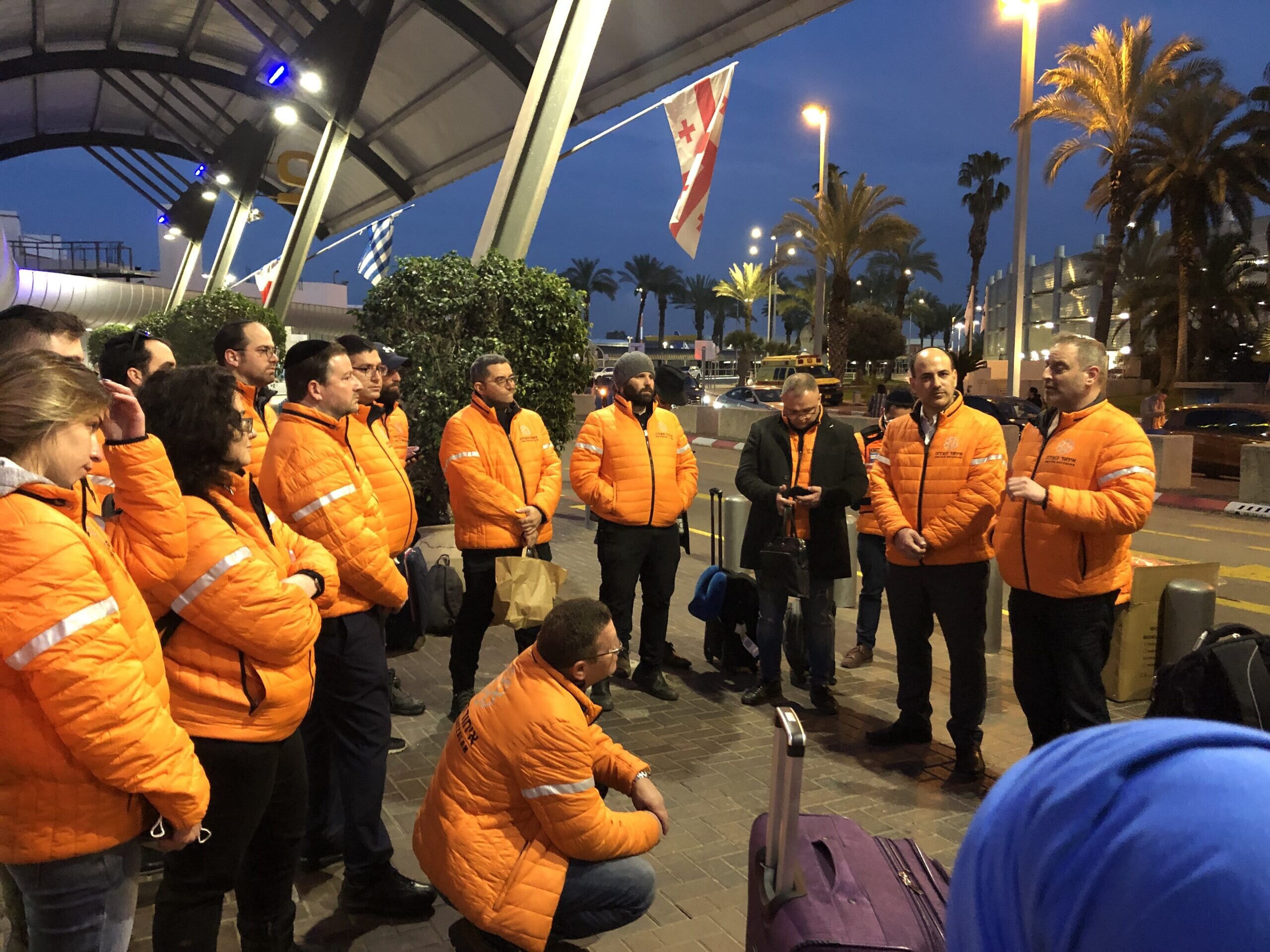 But why is this Israeli-based emergency first-response organization at the forefront of a rescue effort thousands of miles away?

Raphael Poch, the international media spokesperson for United Hatzalah, in addition to being a volunteer EMT and a member of the psychotrauma and crisis response unit, explained: “Any time there is a need anywhere in the world where our services can be used to help out humanity—whether it’s a disaster like the building collapse in Surfside [Florida], hurricanes in Houston, or the earthquakes in Nepal or Haiti, we send international missions to go and help. We saw that there was a crisis, so we went. That’s what we do.”