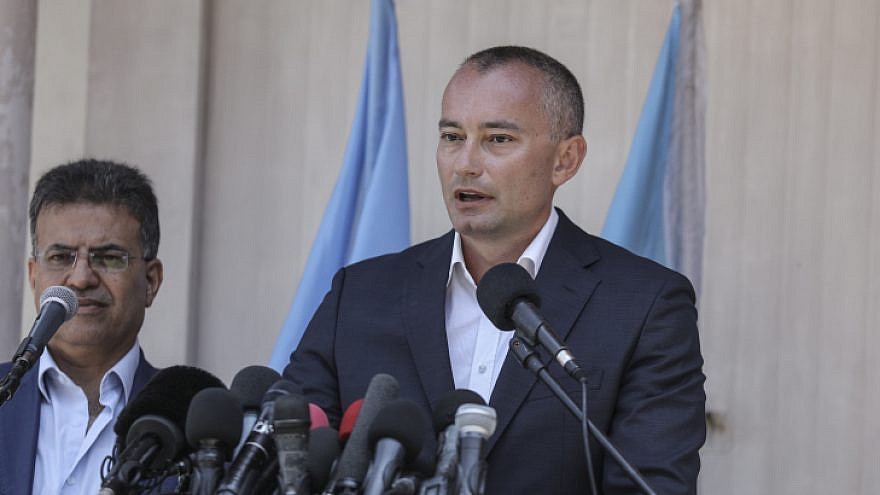 (April 26, 2020 / JNS) U.N. Mideast envoy Nickolay Mladenov warned the U.N. Security Council on Thursday that Israeli moves to annex parts of the West Bank and expedited settlement expansion, along with the coronavirus (COVID-19) outbreak, could spark violence between Palestinians and Israelis.

Mladenov said that annexation would also “constitute a serious violation of international law, deal a devastating blow to the two-state solution, close the door to a renewal of negotiations, and threaten efforts to advance regional peace,” according to an AP report.

Also on Thursday, the European Union warned that the newly formed Israeli government that annexing parts of the West Bank “would constitute a serious violation of international law.”

Palestinian Ambassador to the United Nations Riyad Mansour told the council that cooperation with Israel to combat the coronavirus pandemic is already being undermined because of the threat of annexation. Moving forward with annexation “will destroy the two-state solution and entrench Israel’s military control over the Palestinian people and land,” said Mansour.

He called on the U.N. Security Council, General Assembly, parliaments, judicial bodies and other organizations to take “deterrent action” against Israel, according to the report.
Last week, Israeli Prime Minister Benjamin Netanyahu, and rival Benny Gantz of the Blue and White Party, signed a coalition agreement that includes a plan to annex parts of Judea and Samaria starting on July 1.

U.S. Secretary of State Mike Pompeo said last week that it was up to Israel whether or not to annex territory in Judea and Samaria and the Jordan Valley, and that discussions on the issue are taking place through private channels with the Israeli government.

Israeli Ambassador Danny Danon and acting U.S. deputy ambassador Cherith Norman Chalet did not speak about annexation. Danon said that “Israel has chosen to put aside politics,” and has increased cooperation with the United Nations and the Palestinian Authority to battle the coronavirus, according to the AP.

Danon accused the Palestinians of accepting aid while the P.A. “spreads lies and incites against Israel in the media and in official letters to the council,” including blaming Israeli soldiers for the virus. Addressing Mansour, he said: “The Palestinian Authority must decide if incitement against Israel is more important than the fruitful cooperation intended to save Palestinian lives.”