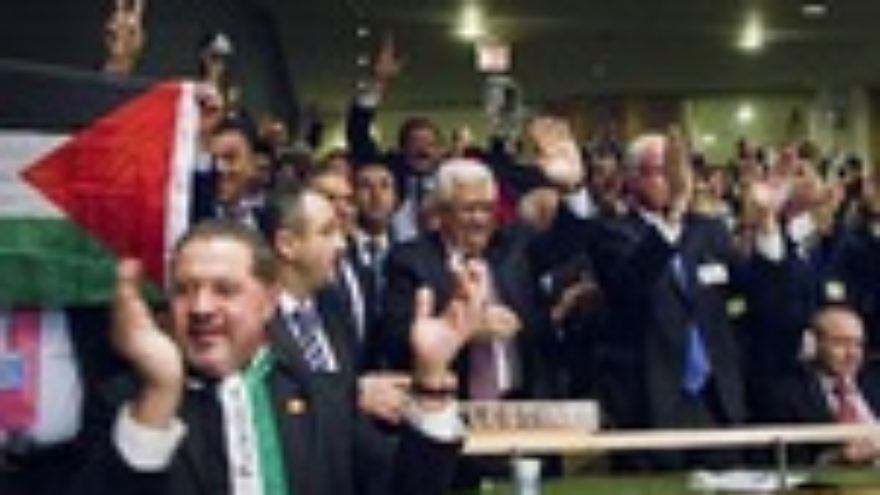 (December 3, 2012 / JNS) Israel and the Palestinians have fought each other on many battlefields and many diplomatic fronts for decades, but the passing of the resolution upgrading the Palestinians’ status at the United Nations indicates the next war between the two might take place at a very different venue: courtrooms.

The Nov. 29 resolution—which gave the Palestinians “non-member observer state” recognition—could have far-reaching implications regarding Israel’s legal standing in the world. Palestinians might hope to translate their victory in New York into action at The Hague, the sleepy Dutch city that is home to the International Criminal Court (ICC) and International Court of Justice (ICJ).

Advocate Ido Rosenzweig, a researcher at the Israel Democracy Institute (IDI) and expert in international humanitarian law, explained to JNS.org that the Palestinian Authority is likely to try gaining statehood recognition in the international courts after a previous attempt failed.

“In such a case the court would have to address the Palestinian Authority’s legal status again in order to determine whether it corresponds with the definitions of statehood,” Rosenzweig wrote in an email.

However, Dr. Allan Gerson—the former legal council to U.S. ambassadors to the UN Jeane Kirkpatrick and Vernon Walters, and author of Israel, the West Bank and International Law—argued that Palestinian claims to statehood based on the passing of the resolution were flawed for three chief reasons.

“First, the resolution is not binding because it was not a decision reached by the [UN] Security Council,” he told JNS.org. Secondly, Gerson said that while there have been exceptions to the Security Council rule such as the 1947 Partition Plan for Palestine, the 1947 exception was based on the recommendations of a UN committee and received support of all Security Council members. Finally, “in law you need a formula for statehood and the Palestinians do not meet the criteria of authority and control,” he said.

The UN General Assembly passed the resolution over Israel’s objections with 138 members voting yes, 41 abstaining and only nine voting no.

Outside North America and the Czech Republic, most of Israel’s support came from island-nations like Palau and Micronesia in faraway Oceania, where Old Testament stories of Israelites returning to their Promised Land resonate strongly among the fervently Christian locals. Even Israel’s regular allies at the UN like Germany could not risk breaking with their European Union partners and abstained. Meanwhile, the Palestinians were backed by Paris, Beijing and Moscow, in addition to a solid bloc of Islamic states.

After the resolution passed, Israeli officials downplayed its importance. Israeli ambassador to the UN Ron Prosor told JNS.org that an automatic majority “has been voting against in the General Assembly for decades, rubberstamping any Palestinian resolution no matter how ill-advised, ill-conceived, or illogical.” The latest vote was “another sad chapter of that unfortunate legacy,” he said.

“Some of those who voted for this one-sided resolution may have thought that they were advancing peace, but they only placed another obstacle in its path,” Prosor said.

Meanwhile, in Ramallah, the seat of the Palestinian Authority, the crowds where celebrating.

“Now we have a state,” PA President Mahmous Abbas told jubilant supporters upon his return from New York. “Palestine has accomplished a historic achievement.”

The decision in New York changed nothing on the ground in the Middle East, but Abbas still had reason to rejoice. First, it put his Fatah-led PA back on the international stage. The round of violence between Israel and Hamas that ended two weeks ago boosted the latter’s profile in the Arab world. Arab leaders trying to arrange a ceasefire spoke to the heads of the Islamist group in Gaza while completely ignoring their rival Abbas, still the nominal leader of all the Palestinians. Fatah bet that a successful bid at the UN would prove to the Arab world and its own base of support that it is still relevant.

On the legal front, if the Palestinians attained statehood status in international courts, they could challenge Israel on several grounds. For instance, the PA could ask the ICC to prosecute Israel for war crimes: think Goldstone report—the controversial probe that accused both Israel and Hamas of war crimes—but with legal teeth. If the prosecution went ahead with such a probe, its jurisdiction would not be retroactive. In other words, Operation Cast Lead would not be under its scope of investigation, but any future flare-ups between Israel and the Palestinians would be. Israeli settlements in the West Bank would also come under scrutiny, given that international law prohibits states from settling occupied land with their own citizens. If Israelis were found guilty at the end of such proceedings, it could lead to arrest warrants being issued against top officials.

All of this is highly hypothetical and subject to extensive future legal wrangling, but the IDI’s Rosenzweig stressed that the potential for a Palestinian gambit in the international courts is real.

“I think it’s worth mentioning the fact that it’s a bargaining chip due to the stress that such procedures might cause both internally in the Israeli systems and in the Israel-Palestinian conflict,” he told JNS.org.

However, Rosenzweig added that such a course of action might backfire because Palestinians could also be charged with committing war crimes.

Regarding the ICJ, Gerson said that if the Palestinians went to that court asking for statehood recognition, he did not know whether they would pass the statehood threshold—but in his opinion, they would not. Either way, such a course of action on the part of the Palestinians would only lead to conflict rather than peace, according to Gerson.

At the moment, neither Israel nor the Palestinians seem willing to back down. The Palestinians refused to give the U.K. assurances that they would not turn to the international courts to prosecute Israel, and the tone of the speech delivered by Abbas at the UN was hardly conciliatory.

On its end, Israel announced it had approved construction of a new Jewish settlement in E1, a crucial strategic area just east of Jerusalem, the day after the resolution passed. Israeli Defense Minister Ehud Barak said the decision had been made long ago, but the timing was to “be expected [because of] the UN decision.”

Prosor told JNS.org, “The only state we saw last week was the Palestinian state of denial—denial of reality, denial of the Jewish people’s history, and denial of the only path forward to real statehood, direct negotiations.”