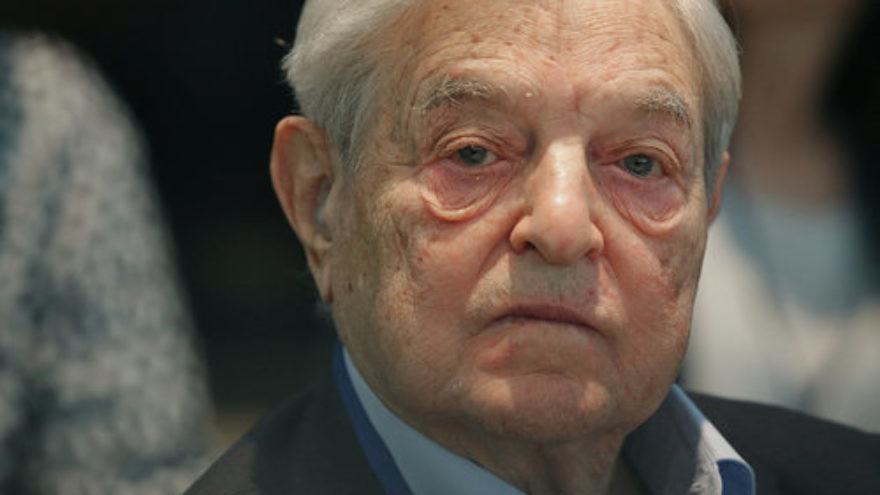 Billionaire George Soros generally does not hide the fact that he uses the considerable funds at his disposal to support his extremist, leftist ideals.

So when he does hide something, it should raise some serious questions. A series of leaked documents recently revealed that Soros’ philanthropy network, the Open Society Foundations, has been giving money to a number of anti-Israel organizations with the goal of smearing the Israeli government and undercutting its relationship with the United States.

The list of organizations is a veritable who’s who of hostile, anti-Israel actors.  One of the leaked documents shows that between 2001 and 2015, Soros funneled over $9.5 million into a range of groups including Adalah, the Al-Tufula Center, the Arab Association for Human Rights, Baladna, The Galilee Society, Molad, the New Israel Fund and others.

Even worse, these documents showed that while the Soros network was systematically and methodically doling out its funds to these controversial groups, it was also working extremely hard to keep its donations and advocacy work quiet.

According to the private documents, which have now been published online, Soros and his network are engaging in these subversive tactics in an effort to “hold Israel accountable” for its supposed violations of international law. In truth, it seems more fitting that Soros be held accountable for his inscrutable policies. His so-called Open Society Foundations certainly don’t appear to be so open after all.

By secretly dispersing his money to influence politicians and the media, Soros hopes to drive a wedge between America and Israel without anyone noticing. This approach is wrongheaded and shameful. And it’s not new.

A similar strategy was employed by some of those same liberal groups to help the Obama Administration sell the catastrophic Iran nuclear deal.  Top Obama advisor Ben Rhodes bragged openly to the media how the administration created an “echo chamber” by coordinating with front groups lined up to praise and support the Iran deal despite its devastating drawbacks.

And here’s a piece of information that should surprise no one: one such organization that was working closely with the White House to champion the Iran deal asked the Open Society Foundations for some cash to help them spread their misinformation.

The American people on the whole were not fooled, but it ended up not mattering since Obama and his allies used parliamentary tricks to jam the Iran deal through Congress without it even receiving a vote.

Now, having played America for the fool, an emboldened Iran is growing more dangerous and menacing by the day, with no signs of slowing down its nuclear program or moderating its aggressive behavior. The deal was not negotiated for the benefit of the American people or our national security, but for Obama’s desire for a foreign policy legacy.

A similar pattern is emerging with regards to this smear campaign against the Jewish state. By attempting to undermine the government of the only democracy in the Middle East, Soros is also undermining American national security. It’s simple. Pro-Israel policies are pro-American policies and a strong Israel makes for a stronger America. But Soros misses that point entirely.

Unlike its undemocratic, authoritarian neighbors, Israel has a free press. It’s a bit ironic to consider this point, given that Soros is now spending an inordinate amount of time, money and effort trying to influence our own free press.

If you want to hold a government between the Jordan River and the Mediterranean accountable for violating human rights, then you certainly don’t have to look far. The leaders of the terror group Hamas in Gaza and the Palestinian Authority, that controls Palestinian areas in the West Bank, aren’t exactly known for respecting the sanctity of life or promoting democratic ideals.

The implications of exposing Soros’ dirty little secret are huge, but you wouldn’t know it from the remarkable lack of attention it has received so far in the mainstream media. Where’s the indignation? Where are the Bernie Sanders supporters who decried use of dark money during the primaries, but are nowhere to be seen now?

Americans should be outraged. People need to wake up and counter this campaign to attack Israel. The American-Israel relationship has been harmed enough by Obama’s policies. Our citizens should not allow radical billionaires to have a further detrimental effect upon this crucial alliance.

Israel is our strongest ally and closest friend. We must make that clear, and we must stand strong together. As Israel’s enemies skulk around in the dark and attempt to cloak their insidious campaigns attacking the Jewish state, those of us who love America and value our vital relationship with Israel should be proclaiming the many ways it makes us safer and declaring our ongoing support for Israel openly with pride.

Armstrong Williams, author of the book Reawakening Virtues, can be heard on his radio talk show on Sirius/XM UrbanView 126.