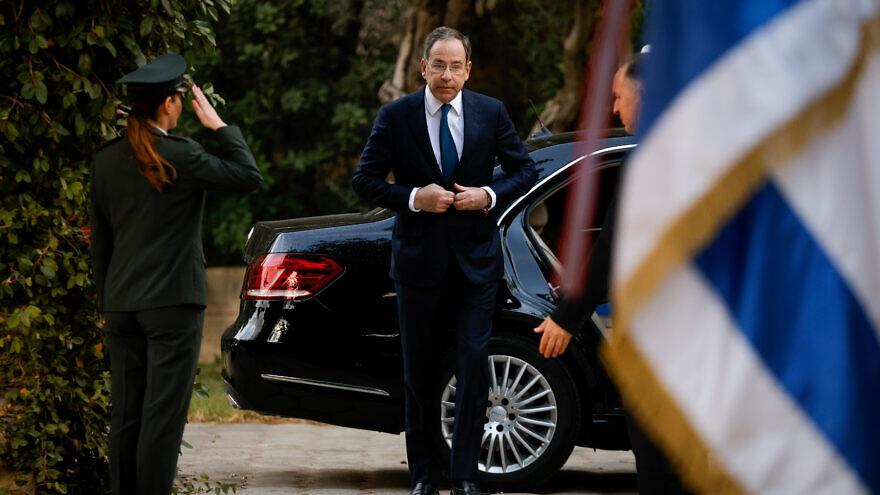 (March 17, 2022 / JNS) U.S. Ambassador to Israel Thomas Nides joined Americans for Peace Now (APN) in a webinar on Tuesday to discuss his new job and what his vision is for the region. “I’m center-left,” he said. “I’m left generally, but I put in the ‘center’ just to make myself feel better.”

Nides made waves soon after he arrived in Israel when he announced that he would not visit the “settlements” out of fear of offending anyone. More specifically, he said, “the idea of settlement growth, which infuriates me, when they do things that just infuriate the situation both in east Jerusalem and the West Bank.”

“We can’t do stupid things that impede us for a two-state solution. We can’t have the Israelis doing settlement growth in east[ern] Jerusalem or the West Bank,” he added, emphasizing that he “cares deeply about the country and the people” and just wants “to do the right thing.”

He continued, saying he doesn’t want to “create anger and disrespect for anyone if I can avoid it, which means I’ll meet with anyone at any point.”

“This is not like I thought this through,” he acknowledged. “It wasn’t like this was going to be my initial ‘go-after-it’ issue. But I just thought inherently, saying ‘I’m not going to go to the settlements’ was the right thing to do. Why upset everyone from me showing up?”

Nides emphasized that he will “visit with anyone.” But, he added, “why do things that initially just agitate people? There’s no reason for it. It’s symbolic.”

Offering a case in point, he said he has visited the Western Wall “30 times” already since arriving in Israel but declined to visit the underground tunnels because he didn’t want to purposefully “aggravate” people.

‘You cannot buy off the Palestinians’

Among the “four or five things” Nides has on his agenda to improve life for the Palestinians—a goal he has repeated multiple times since arriving—is providing the Palestinians with 4G cellular service and more control at the Allenby Bridge crossing between Israel and Jordan.

Of course, he made it a point to add: “I don’t do anything that compromises Israel’s security.”

At the same time, he said he doesn’t believe giving money to the United Nations Relief and Works Agency for Palestine Refugees (UNRWA) hurts the security of Israel.

Clearly aware that he was focusing heavily on Israeli settlements, Nides made sure to point out that “the Palestinians aren’t perfect either.”

He said he “wants to be clear” that “these martyr payments,” which he said “we can debate and talk about” “has caused an enormous amount of problems.” He said he is working with Israeli Prime Minister Naftali Bennett and Defense Minister Benny Gantz, as well as the Palestinians, to figure out “how to stop it.”

The program is commonly referred to as “pay for slay,” whereby families of terrorists get financially compensated for attacks on Israeli soldiers and civilians.

Nides also said that he seeks to “create the atmosphere of opportunities for new leaders to emerge both in Israel and obviously in the West Bank.”

He also doesn’t agree with the Trump administration’s approach of using an economic incentive to encourage the Palestinians to move forward.

“I know it’s going to sound really crass,” he said. “You cannot buy off the Palestinians. It’s not happening. I’m not saying money isn’t important, but that’s not exactly all the Palestinians want. They want to control their own destiny … their own future. If we think we just lead with our checkbook, it doesn’t work.”

Still, along those lines, he remarked on Wednesday that he was glad to see funding provided for Palestinians in the government’s recent budget, which was signed by U.S. President Joe Biden on Tuesday.

In a tweet, he said that he was pleased to see “lots” for Palestinians in the new budget.

These funds, according to Nides, include $219 million as economic support funds, an increase of $144 million from the previous amount, $40 million for the training of Palestinian security forces in the West Bank, and $50 million to fund the Nita Lowey Middle East Partnership for Peace Act for its second year.

‘Way too big a deal of this’

Nides made no mention of Palestinian terrorism and the pattern of rejectionism that has gripped the Palestinian Authority for so many years. He also failed to acknowledge the Palestinians’ inability to control their own destiny is directly linked to their incitement and terrorism.

He lauded the current government with its left-wing and Arab parties, but also said that “there are some people in this government I would prefer not having dinner with.”

Asked about the political horizon, Nides seemed to suggest Israel should share its capital, Jerusalem, with the Palestinians.

“My job is to knock down things that make that possibility impossible,” he said.

He also suggested that the Biden administration could try to produce its own peace plan sometime in the future.

“Could this administration engage in trying to do something broader? Maybe. Right now, my job is to keep all options on the table. We can’t want peace more than [the Palestinians and Israelis] want peace. I can push. I can cajole. I can work. Maybe we come up with a plan at some point.”

Before concluding the webinar, Nides, discussed the hot-button topic of reopening the U.S. mission for Palestinians in central Jerusalem, which Israel is firmly against. “We want to open it,” said Nides. “Both the Israelis and Palestinians have made way too big a deal of this.”

Still, he said, he doesn’t want the consulate issue to distract from the work he is trying to achieve on the ground. Turning to his Americans for Peace Now interviewer, Nides said: “Your agenda is where my heart is.”