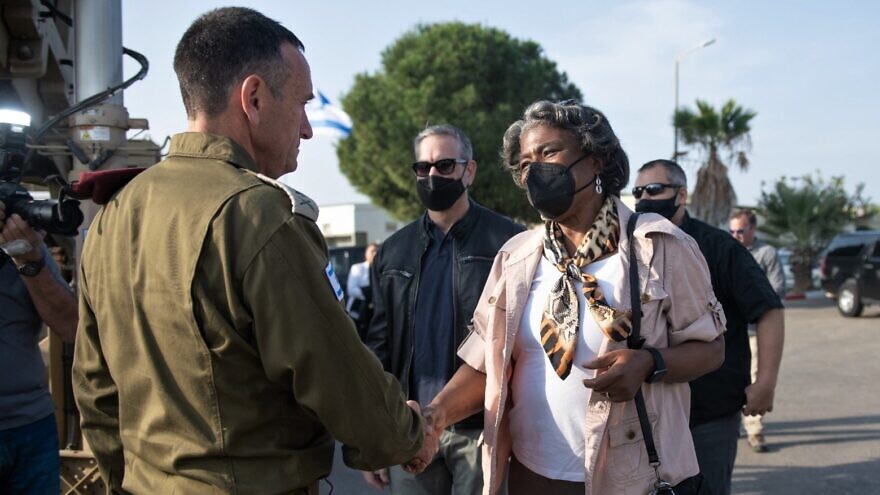 (November 17, 2021 / JNS) U.S. Ambassador to the United Nations Linda Thomas-Greenfield spent all day on Tuesday with the Israel Defense Forces during her visit to Israel.

She was hosted by Israel’s Ambassador to the United Nations Gilad Erdan and IDF Deputy Chief of Staff Maj. Gen. Herzi Halevi, and met with senior IDF officials who briefed her on the latest security challenges faced by Israel.

“Ambassador Thomas-Greenfield’s visit is another example of the deep cooperation between the IDF and the United States, and of how we can deal with threats to the Middle East, together with an emphasis on the Iranian threat,” said Halevi. “Iran is the main source of instability in the region, which can be seen in its involvement in Lebanon, Syria and the Gaza Strip.”

Thomas-Greenfield toured the Palmachim Airbase, south of Tel Aviv, where she was accompanied by Col. Tamir Zimber, head of the Israeli Air Force’s Air and Missile Defense Wing.

“Throughout the tour, the ambassador was shown the Iron Dome, David’s Sling and Arrow aerial-defense systems and was briefed by the director of the Israel Missile Defense Organization, Moshe Patel,” the IDF said. She heard about how such defense systems saved thousands of lives in Israel and protected civilians from rocket fire by terror organizations.

The ambassador also heard how, back in May for a period of 11 days, Iron Dome intercepted more than 90 percent of rockets fired at Israeli civilians by Hamas and other terrorist factions in Gaza.

Later in the day, Thomas-Greenfield received a briefing from the IDF’s commander of the Gaza Division and other senior officials at the Kerem Shalom Crossing, where she learned how it plays a key role in enabling the delivery of humanitarian goods to Gaza civilians.

“The IDF is taking steps to ensure civil stability in the Gaza Strip while remaining ready for any escalation that may arise from Hamas and other terrorist organizations. IDF officials emphasized the need to stop Hamas’s force buildup and weaken the Hamas terrorist organization, which seeks to undermine and exploit humanitarian efforts,” it said.

Towards the end of the visit, the ambassador met with the commander of the 91st Galilee Division and visited an attack tunnel built by Hezbollah, which leads from Lebanon into northern Israel with the intention of kidnapping and/or killing Israeli civilians.