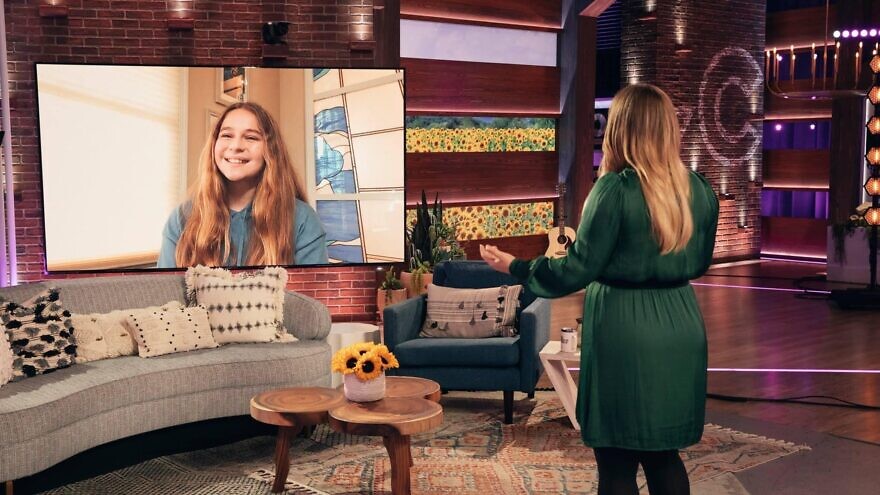 (August 25, 2021 / JNS) Adi Topolosky, a now rising seventh-grader at Berman Hebrew Academy in Rockville, Md., made international news last year after speaking up for girls in sports after a negative experience in a sports store while purchasing basketball shoes made by Olympian and WNBA basketball player Elena Delle Donne, who plays for the Washington Mystics in Washington, D.C. This week, Adi donated her Delle Donne sneakers to the Smithsonian National Museum of American History, used for the upcoming Title IX exhibit planned for summer 2022 and for future generations for educational purposes, both in person and online.

Adi’s story was widely shared when she published a blog to bring awareness of the devaluation of women’s sports, telling how a male employee of Foot Locker told her and her family that he “would rather watch paint dry on a wall than watch any women play sports.”

The laces-free shoes—a collaboration between the Olympic gold medalist and Nike—offer an accessible option for people with disabilities, like Delle Donne’s sister, Lizzie, who has cerebral palsy and autism, in addition to being deaf and blind.

Recounting why she posted her story online, the 12-year-old told JNS, “I was preparing for my bat mitzvah at the time and thought about what it means to take responsibility as a Jewish adult, and speaking up was one of the many ways to do that.”

Her blog post received “a lot of feedback,” she said, with girls and parents reaching out to share similar experiences.

The story also got the attention of the president and CEO of DICK’S Sporting Goods, Lauren Hobart, who invited the young basketball player and hip-hop dance enthusiast to meet with her and WNBA players, including Elena Delle Donne, so they could talk about how their store could better serve women. 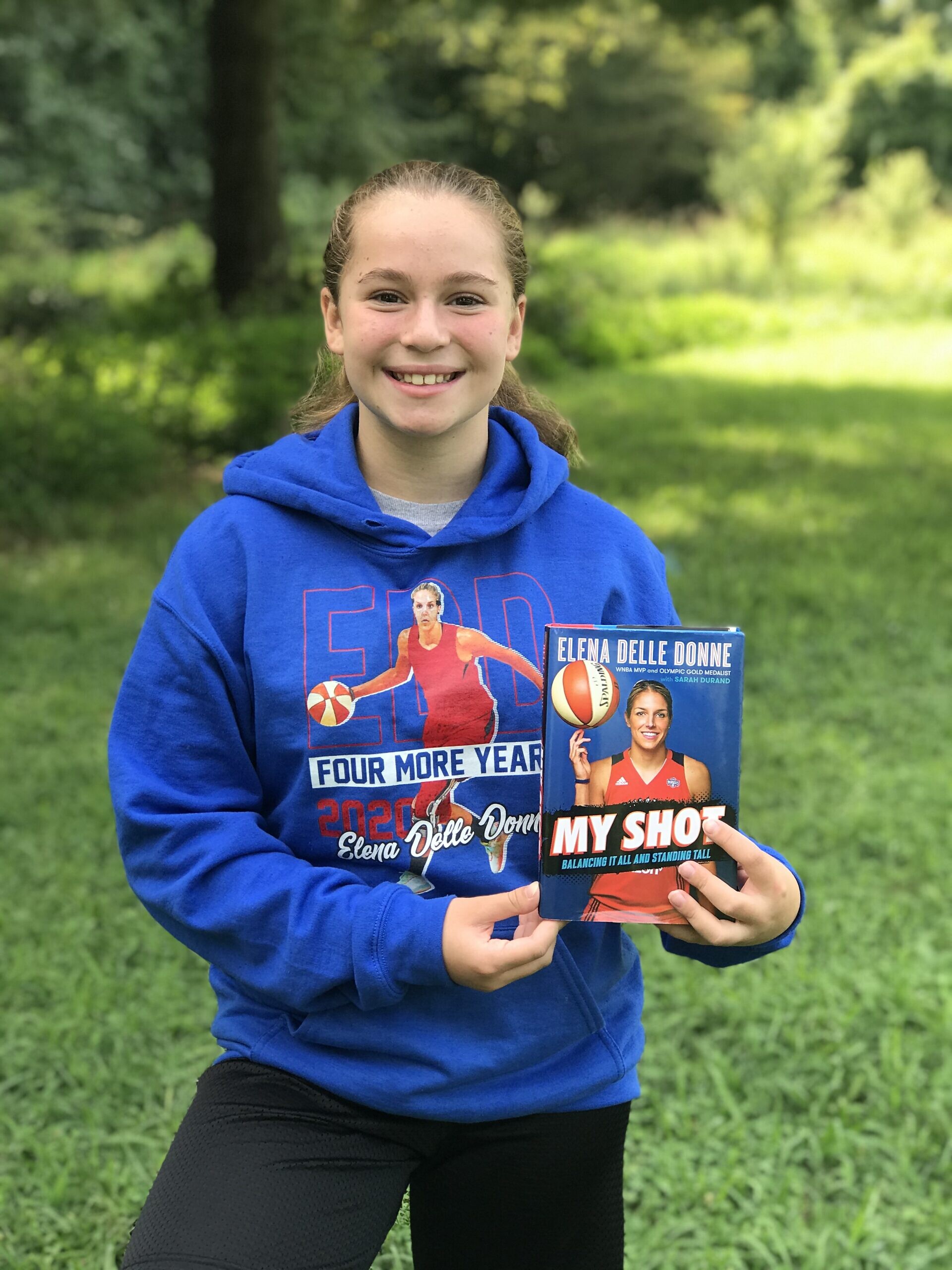 Adi joined the “Girls Power Panel,” organized by Hobart and inspired by Adi’s story, which gathers teenage girls from around the United States who share feedback about DICKS and help the store better support girls and women with more suitable products—not just those that are pink-colored or scaled-down versions of boys’ products.

Through the panel, Adi met other young athletes from all over the country using their voices to make a change and spoke with them, along with professional athletes, about how they could better help challenges in women’s sports, such as non-equal pay, advertisements, sponsors, attention and attire for women in sports.

Since then, Adi has also joined the advisory board for HERicanes to empower girls, has been on local radio and TV, as well as national TV on “Good Morning America” and “The Kelly Clarkson Show.”

“I want to show that women and girls are strong and that they matter, and to stand up for what I believe in,” said Adi, who also met with a former president of the WNBA and a Foot Locker corporate after the incident. “I learned that it’s important to speak up for what you believe in. If you find something that upsets you, find respectful ways to bring real change.”

‘Connecting to the larger community’

Adi is set to visit Israel this November to lead a basketball clinic with former professional basketball player Tamir (“The Jewish Jordan”) Goodman, director of “Hoops for Kids” who also partners with Emunah Israel to provide sports coaches for disadvantaged and at-risk students in students and residential homes.

This past March and in honor of her bat mitzvah, Adi organized a basketball ‘“shoot-a-thon” to raise money to bring the “Hoops for Kids” program to Emunah Israel. She raised $4,250 to bring the program to Emunah’s Achuzat Sara residential community in B’nei Brak, benefiting dozens of underprivileged Israeli girls with high-quality sports and physical-fitness programs.

She said she is looking forward to meeting Goodman—a religious Jew like herself—and the girls of Emunah’s Achuzat Sara, planning to shoot hoops with them and enjoy a bat mitzvah party for her there. 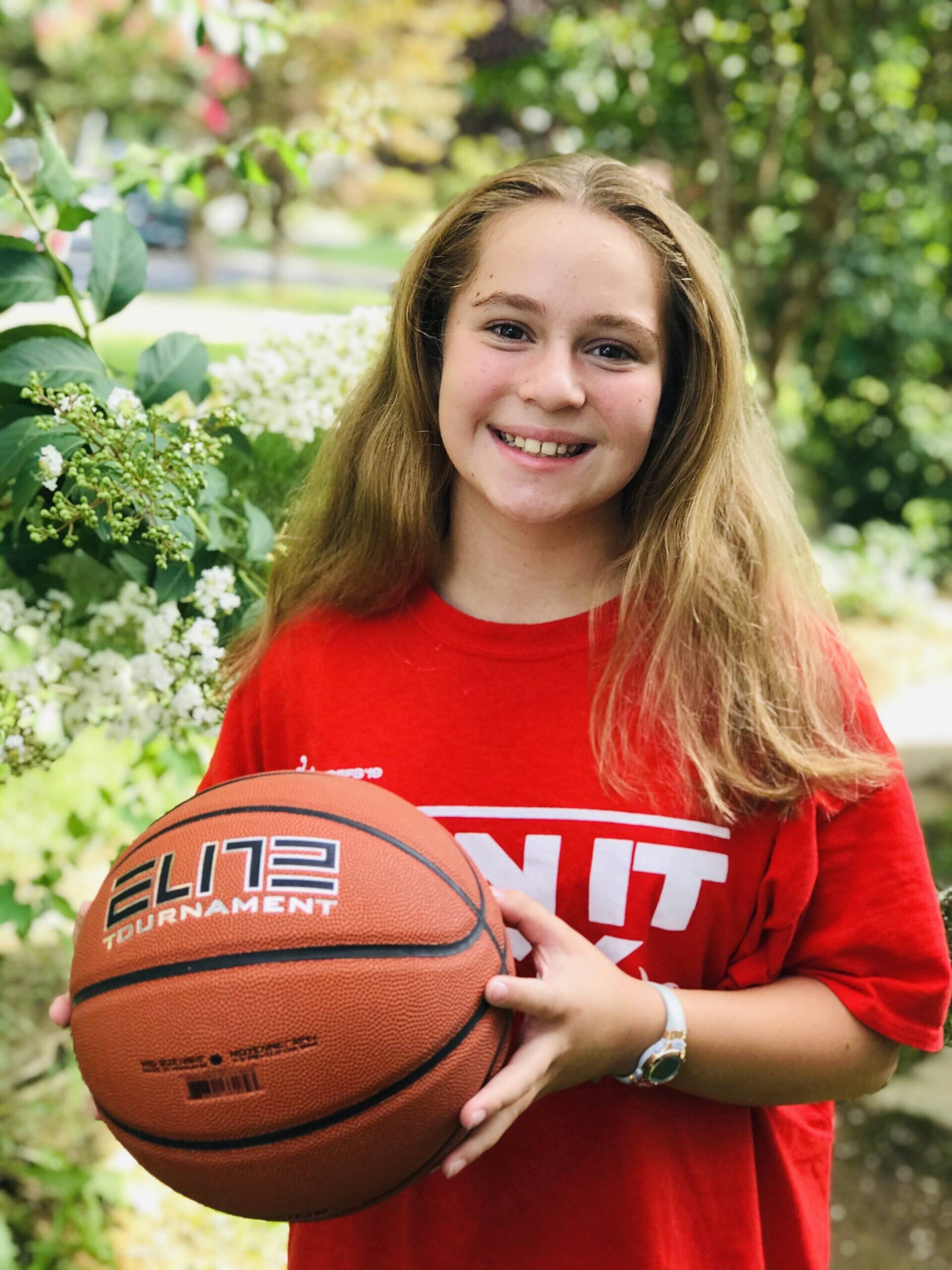 This past March and in honor of her bat mitzvah, Adi organized a basketball ‘“shoot-a-thon” to raise money to bring the “Hoops for Kids” program to Emunah Israel. Credit: Courtesy.

“The girls at Emunah residential homes have experienced unimaginable abuse, both physical and mental in nature, and providing them with basketball and other sports initiatives has been tremendously empowering and therapeutic for them,” Ruth Guggenheim, coordinator of the partnership between “Hoops for Kids” and World Emunah, told JNS. “The children at the Emunah Achuzat Sara home are looking forward to meeting Adi and celebrating with her. Adi is their hero!”

Adi’s parents, Uri and Dahlia Topolosky, a rabbi and psychologist, respectively, discussed important values growing up, “such as standing up for what you believe in and supporting important causes,” said their daughter.

Adi’s mother cites learning Pirkei Avot (“Ethics of Our Fathers”) together as one way to teach Adi to “be aware that we are part of a larger community and seeing the world as a community.”

“Seeing those experiencing inequality has always brought Adi great sadness and affects her tremendously,” Dahlia Topolosky told JNS. “We are always trying to find ways to speak up for issues larger than ourselves and helping others, such as moving to New Orleans post-Hurricane Katrina for six years to help in the rebuilding efforts. Adi was born in New Orleans during those years.”

While the family resettled in New Orleans, she explained, her husband was hired as a rabbi by Congregation Beth Israel, whose shul was destroyed in the hurricane, to help rebuild the community. She worked as a psychologist doing post-trauma work.

“When you speak up larger than yourself, you’re connecting to the larger community and saying ‘I care,’ ” said Dahlia Topolosky, also quoting the Pirkei Avot value, “It is not your duty to finish the work, but neither are you at liberty to neglect it.”

“In other words,” she said, “when we see things that need changing, we must use our voice to do what we can do, and that’s what Adi has been continuing to do.”