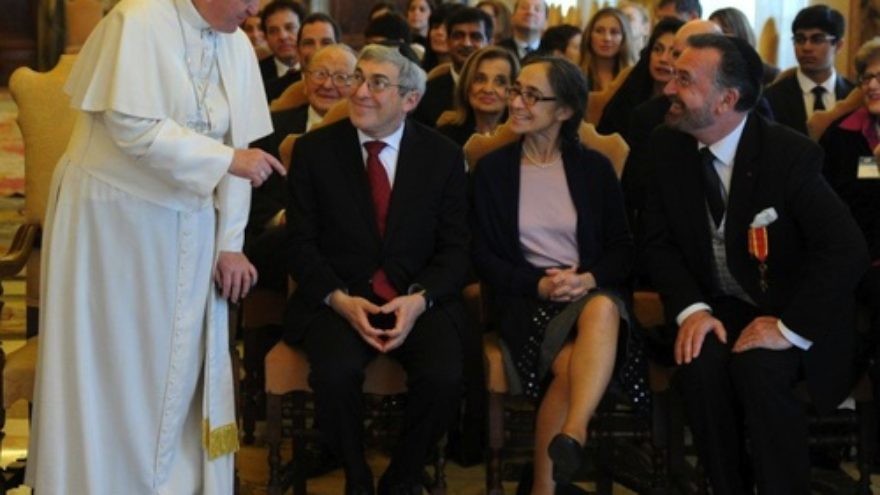 (March 20, 2014 / JNS) “It is important that we dedicate ourselves to transmitting to new generations the heritage of our mutual knowledge, esteem and friendship,” Pope Francis told an American Jewish Committee (AJC) delegation at our private audience with him in February. He was direct and warm. The pope meets hundreds weekly, but for me and the rest of our group, this was a unique encounter at the Vatican, an experience that was especially meaningful.

He is the first pope to come to head the Roman Catholic Church with extensive experience in dealing with Jews and people of other faiths at the local level. As a priest and then as Archbishop of Buenos Aires, he was close to the Argentinean Jewish community, the largest in Latin America. He implemented personally, in the pews, the teachings of Nostra Aetate, the landmark Vatican II document that transformed the official Church approach to Jews and Judaism. “Nostra Aetate today constitutes for the Church the sure point of reference for relations with our ‘elder brothers,’” he said.

Indeed, he emphasized the need to ensure that its lessons reach all parts of the Catholic Church worldwide. “Change must not remain at Olympian heights,” Father Norbert Hofmann, secretary of the Holy See’s Commission for Religious Relations with the Jews, told us. “Education must be transmitted at all levels that this Catholic-Jewish relationship is good.”

Every Vatican official we met over several days reiterated what the pope himself has declared, that Catholics and Jews are members of the same family. Next year’s 50th anniversary of Nostra Aetate will provide an opportunity to reinforce and further advance Catholic-Jewish dialogue and cooperation.

Along with close collaboration based on shared interests there is also a growing recognition that Catholics and Jews face common threats to religious freedom. Several Vatican officials acknowledged that Christians and Jews face similar enemies around the world. Along with a rise in anti-Semitism there have been numerous attacks, some fatal, on Christians in the Arab world and in certain African countries where radical Islamist groups are using violence to assert themselves.

Pope Francis firmly believes that anti-Semitism is a sin. That message needs to be broadcast much more widely. And the message was particularly poignant as I sat in Brussels only a few days after visiting the Vatican.

“Hate crimes are a growing problem in Europe,” Cecilia Malmström, the European Commissioner for Home Affairs, said in her keynote address to the AJC Transatlantic Institute’s 10th anniversary gala. While hate crimes against many minority groups and against gays give cause for grave concern, the targeting of Jews is of special concern to European officials like Malmström, for obvious historical reasons.

“Anti-Semitic hate crime was experienced by one in every four Jews in Europe,” said Malmström, citing a recent European Union (EU) survey. “Young Jews are afraid to go to school, even in my own country of Sweden.”

The report she referenced was the EU Fundamental Rights Agency’s survey of Jews in eight European countries. The results are alarming, and Jews are afraid. Thirty-four percent of Jews in these countries have considered emigrating. In France, which has the largest European Jewish community, the figure is 46 percent, and in Hungary 48 percent.

The survey data became all the more real in conversations with members of the European Parliament, Belgian Jewish leaders and younger Jews from across the continent who belong to the European Union of Jewish Students.

The 28 EU Member States are “obliged to ensure that hate crimes are investigated and the perpetrators prosecuted,” Commissioner Malmström said. But the first obligation may well be to build trust with the victims of hate crimes. According to the FRA survey, three-fourths of those who experienced anti-Semitic harassment and two-thirds of those who experienced physical attacks or threats did not report them, largely because they think nothing would change.

Political, religious, and civil society leaders committed to the core values of democracy, including fair treatment of minorities, will need to act more forthrightly to eradicate the hate that threatens not only Jews, but the very fabric of Europe.