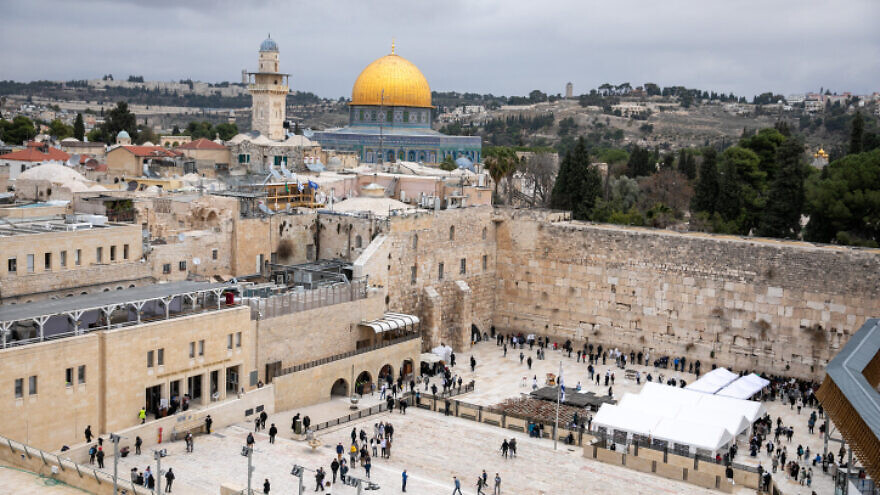 (February 2, 2022 / JNS) Violence broke out Tuesday morning at the Western Wall in Jerusalem’s Old City after a small group of Women of the Wall members, accompanied by Knesset members, approached Orthodox women who were praying here.

According to the Western Wall Heritage Foundation, the group “violently broke through the area set aside for them”—violating agreements reached with them by Israeli President Isaac Herzog and the Justice Ministry—and charged at Orthodox women at prayer as they tried to reach the Wall.

“The group instigated the worshippers and disgracefully disturbed the hundreds of men and women who came to the wall this morning,” a statement by the foundation read.

It said that staff of the Western Wall Heritage Foundation repeatedly asked the group to remain in the area set aside for them to maintain public order.

No one was hurt despite the physical violence, a spokesperson for the heritage foundation confirmed.

Women of the Wall had announced last week that they would be demonstrating on Tuesday. Knesset member and Reform Rabbi Gilad Kariv (Labor) and MK Alon Tal (Blue and White) decided to join the women due to the “lack of real progress” on the Western Wall issue, they said in a statement.

Last week, Israeli Prime Minister Naftali Bennett said in an interview that he would not be able to implement the approved plan to establish an egalitarian section at the Western Wall due to opposition within the coalition.

“We do not intend to give up the right of every Jew to pray as is their custom at the Western Wall,” said Kariv. “I expect the prime minister who established the temporary prayer plaza as minister of the Diaspora to quickly implement a compromise solution supported by a clear majority of Israeli citizens… There is no reason to continue to reward extremists.”

He also released a video in Hebrew on Twitter saying that he expects to see progress on the Kotel plan despite Bennett’s assertion.

Tal expressed “sorrow at the insistence on turning one of Judaism’s holiest sites into a battlefield,” and said in a statement that the people of Israel deserve an arrangement that respects all streams of Judaism.

The Western Wall Heritage Foundation expressed shock over the violence.

“The Western Wall Heritage Foundation calls upon anyone for whom the Western Wall is precious to distance disputes and demonstrations from the remnant of our Temple,” it said in its statement. “We must cry out all over the world against those who wish to destroy the Western Wall and its holiness.”