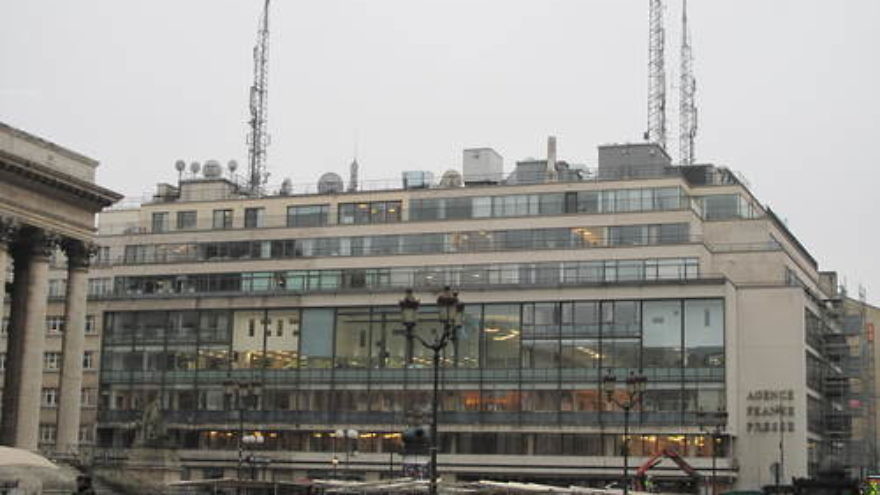 (July 1, 2016 / JNS) A Mideast-focused media watchdog group is criticizing the Agence France-Presse (AFP) news agency for what it called the “clear and blatant” conflict of interest of employing the chairman of the anti-Israel Palestinian Journalists’ Syndicate (PJS) as a reporter on Israeli-Palestinian affairs.

While Nasser Abu Baker reported on the Israeli-Palestinian conflict for AFP for more than a decade, he also held senior positions with PJS, according to a recent report issued by the Committee for Accuracy in Middle East Reporting in America (CAMERA).

In one instance, while AFP covered Israel’s detainment of Mohammed al-Qiq, a Palestinian journalist with ties to the Hamas terror group who was held for months without trial, Abu Baker-led PJS campaigned for al-Qiq’s release, CAMERA’s report states.

In a radio interview, Abu Baker accused Israel of “Nazi” crimes and using Islamic State-style practices against Palestinians, according to Al-Watan, a Gaza-based independent news website.

In March, at a “Media and Terrorism” conference in Jordan, Abu Baker falsely claimed that Israeli hospitals were treating 5,000 Islamic State members.

The CAMERA report points to a call Abu Baker made as chairman of PJS for all his “male and female colleagues/journalists” to “boycott any Palestinian official, regardless of how senior he/she is, who conducts an interview with Israeli journalists and Israeli media…this poisonous media whose only goal is to broadcast dissent and incite against our people. Their media, which is directed by their government, is one of the tools of the occupation. Therefore, the time has come for a comprehensive boycott of their media. The Syndicate will have a clear position on this and I plead with all the journalists to abide. We will publish the name of any official who gives an interview to their media from this moment.”

Tamar Sternthal, CAMERA’s Israel director, said that AFP’s “conflict of interest is clear and blatant. By employing a man who aggressively silences Israeli journalists and perspectives, AFP news about Israel is compromised at best, deceptive at worst.”

In response, an AFP official did not directly address the criticism leveled against the news organization.

“AFP has a strict code of ethics concerning the impartiality, fairness, and accuracy of its coverage that its journalists are duty-bound to respect,” Laurent Lozano, AFP’s bureau chief for Israel and the Palestinian territories, told JNS.org. “We have full confidence in the ability of our staff in Israel and the Palestinian territories to uphold these values.”

Matt J. Duffy, an international media law specialist who focuses on Arab media, told JNS.org that the “boycott against Palestinians who speak to Israelis is not good journalism. Good, ethical reporting involves speaking to all sides of the story. If only one side of a story is presented, then we’re only making propaganda.”

Duffy, a Kennesaw State University journalism professor and board member for the Arab-U.S. Association for Communication Educators, added that “the Palestinian syndicate should drop the boycott. AFP should ask for Mr. Abu Baker to end the boycott, resign from the journalism syndicate, or find a new job.”