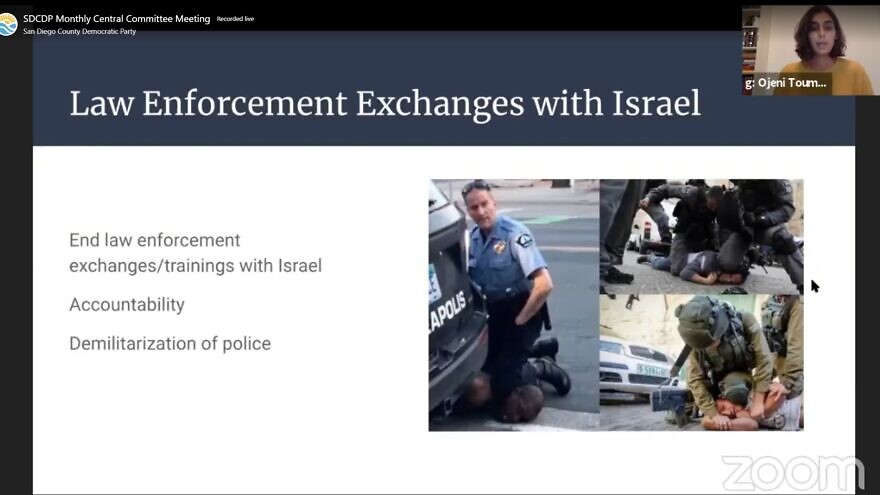 During the virtual event on Sept. 21, one panelist falsely accused Israel of being complicit in the May 2020 murder of African-American George Floyd in Minneapolis because several senior U.S. law enforcement officials had visited Israel to learn about counter-terrorism.

Another panelist defended the five former leaders of a Texas-based Muslim charity who were convicted in 2009 of funneling approximately $12 million to Hamas, saying they were “tried for the simple audacity of creating a foundation that wanted to give medical supplies to children in Gaza.” A separate panelist ignored the persecution Jews faced in the Middle East and North Africa by claiming that they lived in “harmony” with ruling Arab and Muslim populations.

“While their suffering was historically less severe than European anti-Semitism, Jews in the Arab world were always treated as second-class citizens at best and a persecuted minority at worst,” said Yael Steinberg, director of StandWithUs San Diego. “This inconvenient truth is frequently distorted or denied by those who seek to blame Israel and ‘Zionists’ for all problems in the region.”

StandWithUs San Diego said it urges the party “to denounce the conspiracy theories and outright falsehoods promoted during the panel” and “to take steps to ensure they never allow such anti-Semitism to go unchallenged again.”

“We also call on the SDCDP to acknowledge the centuries of oppression and systemic discrimination Jews faced across the Middle East and North Africa, long before the Arab-Israeli conflict,” added the group. “We stand with members of the SDCDP who are fighting back against this hatred and misinformation.”