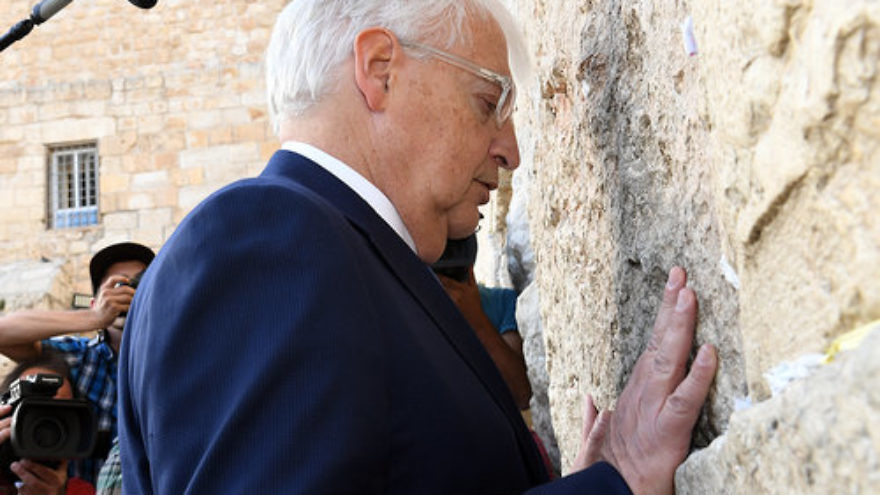 (November 13, 2017 / JNS) Speaking exclusively with JNS.org, U.S. Ambassador to Israel David Friedman on Sunday night confirmed a report that a team from the Trump administration is drafting an Israeli-Palestinian peace plan.

“We’re working very hard on it,” Friedman said of the Mideast peace proposal, in an interview at the Zionist Organization of America’s (ZOA) annual awards dinner in New York City. “It’s hard to comment on it while we’re in the middle, because it’s delicate.” He added that more information about the plan will be publicized in “a few months.”

Friedman is on the four-person team drafting the proposal, along with President Donald Trump’s son-in-law and senior adviser Jared Kushner, Special Representative for International Negotiations Jason Greenblatt, and Deputy National Security Advisor Dina Powell. The New York Times reported Saturday that the team is consulting with U.S. Consul General in Jerusalem Donald Blome, as well as others from the State Department and the National Security Council.

The ambassador was among the honorees at Sunday’s ZOA event. Friedman told the crowd that while the U.S. is “the nation of my birth, the nation of my citizenship,” Israel “is the nation of my faith [and] no loyal American need apologize for loving Israel and urging our government to support it. Support for Israel is a quintessential American value.”

He added, “The United States government treats Israel the way it deserves to be treated: as a critical strategic and trusted ally in one of the world’s toughest neighborhoods. Prime Minister [Benjamin] Netanyahu and I agree that we have turned a page on the relationship between Israel and the United States. It is a change for the better.”

Following his remarks on stage, Friedman told JNS.org that American support for Israel is “becoming too tilted to one party (the GOP) and it’s got to get back to where everybody supports Israel.”

“The more the Middle East becomes a hotbed of activity, the more that the United States recognizes the importance of Israel and that we need to, on both sides of the aisle, stand strong with them,” Spicer told JNS.org. “At the end of the day, when you look at the position of the U.S. government on both sides of the aisle, I think you continue to see a steadfast support for what we need to do as a government to help and support Israel.”

Bannon ‘proud to be a Christian Zionist’

Former White House senior counselor and current Breitbart.com CEO Steve Bannon was also honored at the ZOA event. He spoke of “an insurgency movement against the Republican establishment,” lamenting how fellow Republicans have not acknowledged the ousted strategist’s accomplishments during his tenure in the administration.

“In the first nine or 10 months of [Trump’s] administration, [the U.S.] destroyed the physical caliphate of ISIS. People forget,” a furious Bannon told the audience. “The opposition party will never tell you. [They’ll say] ‘Oh, President Trump is just following through on Barack Obama’s plan.’ Yeah, I don’t remember ISIS being eradicated on his watch. In 2014, ISIS had 8 million people under their reign and in the first nine months of President Trump’s administration, it’s eradicated.”

He continued, “There are so many games being played by the establishment. They lower the bar of what they are supposed to be. You get dulled down all the time. That’s how you get the Iran deal. That’s how we still allow the American government to finance people who have blood on their hands of innocent Jewish civilians….It’s time for us to act, and I believe the only way to act is not through moderation. I am not a moderate, I’m a fighter, and that’s why I’m proud to stand with the state of Israel. That’s why I’m proud to be a Christian Zionist.”

Bannon said the “radical left” is trying to “nullify” the 2016 presidential election, adding, “President Trump needs our back because we’re a nation at war, and this war is only going to be won if we bind together and work as partners.”

Iran’s nuclear program was another major theme at the ZOA dinner. Ambassador Friedman said that if Netanyahu were asked for his three top foreign policy objectives, “he will tell you it is Iran, Iran and Iran.”

“This is not the same as saying ‘location, location, location’ when talking about real estate,” Friedman said. “In Iran, there are three independent things to be concerned about: Iran as a nuclear power that threatens to annihilate Israel; Iran as a state sponsor of terrorism through Hezbollah and other proxies; and Iran as regional superpower expanding through Iraq, Syria and Yemen and filling the vacuum created by the defeat of ISIS.”

Upon accepting his own ZOA award, Sen. Tom Cotton (R-Ark.) told the star-studded room of guests that Israel “must never stand alone” in its fight against a nuclear-armed Iran.

“Red, white and blue must stand beside blue and white,” Cotton said, referencing the colors of the American and Israeli flags. “We are in this fight together, all the way until the end. Remember the ayatollah’s chant, ‘Death to Israel’ and ‘Death to America’…Our two nations have never ducked a challenge.”

The senator added that if forced to act, the U.S. can “totally destroy” Iran’s nuclear arsenal, and if the Iranians “choose to rebuild it, we can destroy it again until they get the picture.”