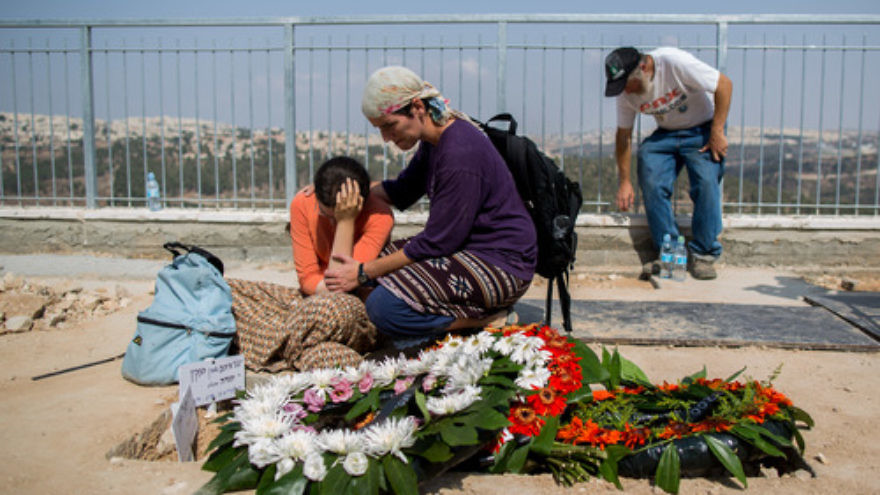 The heartbreaking murder of Rabbi Eitam Henkin and his wife Naama, gunned down by Palestinian terrorists in front of their children, will generate tear-filled eulogies and anguished recitations of tehillim (Psalms) throughout the Jewish world. As they should.

The depressingly familiar post-terrorist attack ritual is already unfolding before our eyes. The Obama administration has issued a formalistic condemnation, adding its standard, amoral appeal: “We urge all sides to maintain calm…” (As if “all sides” are to blame for disrupting the “calm” in the first place.) The news media will portray the murders as a response to something that some Israeli did or is suspected of doing or might have done, somewhere, at some point. And the United Nations will, of course, remain silent. Palestinian murders of Jews don’t interest anybody in that august building.

American Jews will watch all this in anguish and frustration. There will be some angry press releases, some heartfelt tears, and more tehillim. As there should be. (It’s also a particularly personal cause for my own family, which has supported the Henkins’ work at the Torah-study institute Nishmat by endowing the Alisa Flatow Program for International Students in memory of my daughter—who was also a victim of Palestinian terrorism.)

What usually happens next, however, is that the news of the murders retreats from the headlines, the memories of the victims fade from public consciousness, and we all collectively turn the page and shift our attentions elsewhere.

But it shouldn’t be that way. We must not become the turn-the-page business-as-usual generation. There are concrete actions that American Jews can take in response to the Henkin murders.

The Al-Aqsa Martyrs Brigade, which is the military division of Fatah, has publicly boasted that it committed the murders. Fatah is the largest faction of the Palestine Liberation Organization, which is the parent body of the Palestinian Authority. (Mahmoud Abbas is chairman of all three: Fatah, the PLO, and the PA.) When the State Department first created its official list of “Designated Foreign Terrorist Organizations” in 1997, it left Fatah off—otherwise, it would have been illegal for the U.S. to keep sending $500 million to the PA every year.

But the Al Aqsa Martyrs Brigade committed so many suicide bombings and other major terrorist attacks in the years to follow, that eventually the U.S. could no longer turn a blind eye. So it opted to play a little game—to pretend that the Brigade was not connected to Fatah. The Brigade was added to the Terrorist Organizations list in 2002. Fatah was not.

In 2003, a BBC investigation of PA documents captured by Israel proved that the Al-Aqsa Martyrs Brigade is directly financed by Fatah. In June 2004, the PA’s prime minister, Ahmed Qurei, declared, “We have clearly declared that the Aksa Martyrs’ Brigades are part of Fatah. We are committed to them and Fatah bears full responsibility for the group.” The U.S. ignored that and hoped nobody would notice. To this day, Fatah is still left off the list. It’s time to urge President Obama to put Fatah on the list.

The House of Representatives last week overwhelmingly approved legislation to take $43 billion from frozen Iranian assets and give it to American victims of Iranian-sponsored terrorism who were awarded that amount by U.S. courts. The Obama administration would like to just give the money to the Iranians. The bill now heads to the Senate. American Jewish organizations should be making it their top lobbying priority.

Advocate for action against killers of Americans

Rabbi Eitam Henkin was the son of the renowned educators Rabbi Yehuda and Rabbanit Chana Henkin, both of whom grew up in the U.S. More than 100 Americans have been murdered by Palestinian terrorists since the 1960s, most of them in recent years. The U.S. government has a special legal and moral responsibility when American citizens are victimized by terrorists. Yet in all these years and after all these Palestinian attacks, not a single Palestinian murderer of Americans has been indicted by the American government or extradited to the U.S. America has not even taken symbolic steps, such as insisting that the PA stop naming schools, parks, and sports tournaments in honor of killers of Americans. We must demand that the Obama administration take action.

Yes, this is a time for tears and prayers. But it must also be a time for action by American Jews. Let’s contact our Jewish leaders and our elected representatives, and make it clear that the time for business as usual is over.

Stephen M. Flatow, an attorney in New Jersey, is the father of Alisa Flatow, who was murdered in a Palestinian terrorist attack in 1995. His family has established the Alisa Flatow Program for International Students at Nishmat, the Jennie Schottenstein Center for Advanced Torah Study for Women, and dedicated Nishmat’s building in Alisa’s memory.