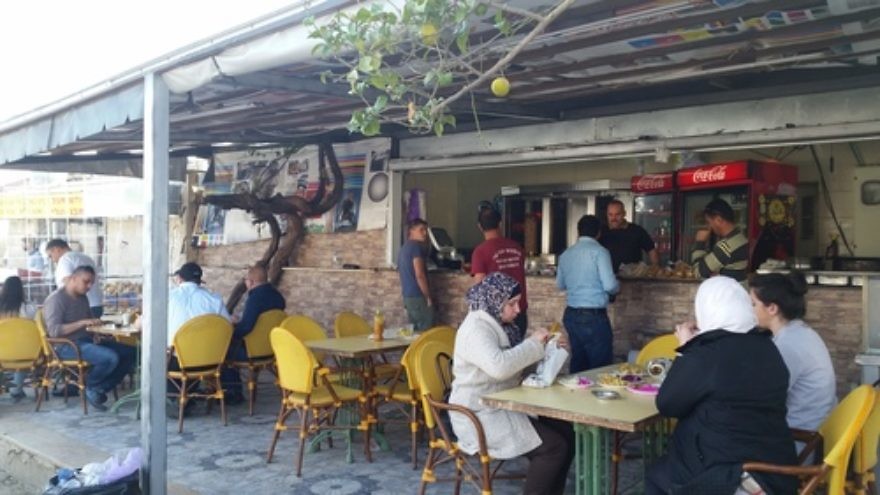 (March 20, 2015 / JNS) Near the entrance to the city of Ariel in the heart of Samaria lies an Arab strip mall of sorts, where Jews and Palestinians alike can get fruits and vegetables, a car wash, pet supplies, hummus, and falafel. The former mayor of Ariel, Ron Nachman, used to joke that the area is Ariel’s “duty-free zone.” It’s located right on the border of Israeli-controlled and Palestinian-controlled territory, so no one really knows exactly to whom the shop owners pay taxes.

Abu Ali, a Palestinian man who owns the compound housing the businesses of the “duty-free zone,” isn’t interested in the results of Tuesday’s Israeli election. He only heard the news of the victory by Prime Minister Benjamin Netanyahu’s Likud party from casual conversations. He’s more concerned with running the mini-empire he started in the 1960s.

“We, the ordinary people, feel the true peace—not the political peace,” Ali told JNS.org in Hebrew on Wednesday outside the Arab strip mall’s falafel joint, which was crowded with both Muslims and Jews enjoying a late lunch.

Across the way, another middle-aged Palestinian who asked to remain nameless also didn’t follow the election. “It doesn’t interest me at all,” he said in Hebrew. “They’re all Jews. No difference between Sharon, Shamir, Yitzhak. They’re all the same. They all want to expel Arabs from their land.”

His friend, Fadi from Marda, a village neighboring Ariel, agreed.

“They’re all the same. Bibi or Shas—they can’t help us with anything,” he said.

Nor does Fadi believe that the Joint Arab List, which won 13 Knesset seats on Tuesday to become Israel’s third-largest political party, could have any influence over what happens to Arabs living in Palestinian Authority-controlled territory. “The Arabs don’t want to vote for the Jews. But at the end of the day, they can’t accomplish anything because they can’t be in a coalition or become prime minister,” said Fadi, who cares little about which candidate may proclaim to advance any sort of “peace process.”

“There is no peace. There will be no peace,” he said, revealing yellow teeth clearly in need of more brushing and less nicotine. “Even if he wants to make a deal, the nation wouldn’t let him.”

Fadi’s reasoning: according to Judaism, Jerusalem can’t be divided—not that it would make much of a difference to him.

“It’s our land and one day we’ll take it,” he said, having no qualms going on record and even having his picture taken, before offering me some coffee. But Fadi’s view is not entirely black and white. “Here, Jews and Arabs are the same,” he said, looking around, calling the people of Ariel “good people” as compared to other “settlers.”

Yet the views of Fadi and his friend are not the consensus in this idyll of co-existence. (Or at least, idyllic on most days. The road nearby was the site of the 2013 Palestinian rock attack that eventually took the life of Adele Biton last month.)

Across the street, Faisel (a pseudonym given his request for anonymity) from the town of Salfit, less than a mile away, was actually glad Netanyahu won. “At first I wanted Kahlon. He helped everyone lower cell phone prices,” said Faisel, who then pulled out a picture from his smartphone of Haaretz’s election results chart. The hazel-eyed, college-educated Palestinian followed the election closely.

“Bibi speaks about defending your security—but that means he helps our security,” Faisel said. “The left is no good for us (Palestinians) or them (Jews).”

Fadi later told me that Faisel was lying when he said he liked Netanyahu, which is why, unlike Fadi, Faisel asked to remain anonymous. But they agree on one thing.

“We have an election once in a lifetime, and then it splits between their children. It’s not our wish,” Fadi said.

Faisel admires how Israel holds elections every few years. “By us, whoever is in power, only a bullet to his head will take him out,” he said. But he doesn’t necessarily feel at a loss that elections in the Palestinian Authority haven’t been conducted for about 10 years, even since (expired-term) President Mahmoud Abbas took the throne.

Faisel then directed me to Hassim, who was standing nearby, for a perspective of an Arab with a “blue card”—Israeli citizenship. Hassim lives in a village near Nazareth and voted for the Joint Arab List.

“All the [Arab party] leaders united for one purpose: to change the government from right to left so that there will be equality, rights, and land for Arabs,” he said in Hebrew. There will be no change at the top of the government, but Hassim is pleased with the Joint Arab List’s performance, whipping out his Facebook app to look at the results.

“I’m not disappointed. The nation made its choice. We must respect it,” he said.

Hassim said he bears no ill will towards Netanyahu. “Bibi’s a good man. Not a bad prime minister. A smart man. Fact is, he succeeded again,” he said.

While he thinks peace will never grace the Middle East no matter which Israeli leader is in power, Hassim ended the interview with his own overture: “Bibi’s invited here for falafel.”