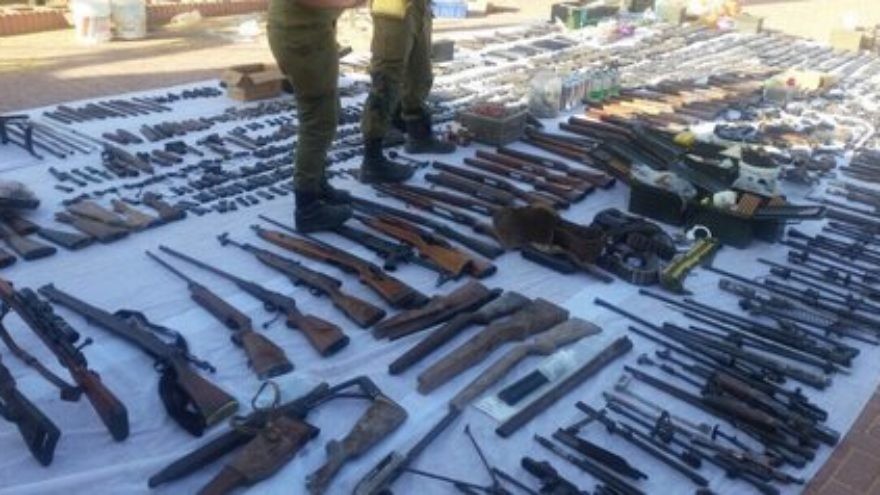 It’s one of the most disturbing photos from Israel that I’ve seen in years.

I’m referring to this week’s image of the hundreds of Palestinian terrorist weapons captured in Israeli raids. It was enough to send shivers down one’s spine. And it revealed more about the Israeli-Palestinian conflict than all the panel discussions, research papers, and expert analyses with which we are always being bombarded.

Friends of Israel often complain about what they say is the Israeli Foreign Ministry’s inadequate effort to make Israel’s case to the international community. And those complaints are not entirely without merit. But somebody in the foreign ministry’s “hasbara” division deserves credit for coming up with a simple, yet incredibly effective way of demonstrating what Israel is up against: show their weapons.

Telling the world that hundreds of terrorists have been arrested, or thousands of weapons captured is mind-numbing. They’re just numbers. The public yawns and turns the page. But recall what the Israelis did after capturing in Jan. 2002 the Karine A, the Palestinian ship seized by Israeli commandos. They didn’t just issue a press release about the 50 tons of arms, or the 700,000 rounds of ammunition on board. They actually spread the weapons out, on the ground, for the photographers and television cameras. And they reached as far as the eye–and the lens–could see.

The images of the Karine A weapons were what exposed and destroyed the late Palestinian leader Yasser Arafat. All his years of pretending to be moderate and peace-seeking went up in smoke. The whole world could see, and never forget, the unbelievable arsenal he was trying to smuggle into Palestinian Authority-controlled territory.

In terms of what it revealed about Palestinian intentions, that photo from 2002 was worth a thousand words. And so is this week’s photo.

Israeli security forces captured no less than seven separate Palestinian terrorist weapons storehouses. And then they spread the weapons out so photographers could actually see them.

To shoot Jews. To stab Jews. To handcuff hostages.

And where were the weapons captured? In Bethlehem and Hebron, that is, where the Palestinian Authority rules.

That’s right, the same Palestinian Authority (PA) that is obligated by the Oslo accords to fight terrorists, to put them in jail, to seize their weapons. But once again, the terrorists are manufacturing and storing weapons right under the PA’s nose, and they do nothing about it. Even though it has one of the largest per capita security forces in the world, the PA for some reason is unable to find the weapons.

We know from the New York Times–no friend of Israel–the real reason that Israel is forced to go in and do what the PA is supposed to be doing. On March 23, 2014, the Times published a report about Israeli troops entering the Palestinian-ruled area of Jenin in pursuit of terrorists. The reporter needed to explain why it is that the Israelis, and not the PA police, were doing the pursuing. The reason, she said, was that although the Jenin refugee camp is under the full control of the Palestinian Authority, “the Palestinian [security forces] did not generally operate in refugee camps,” even though those camps are hotbeds of terror activity.

And don’t think for a minute that this week’s weapons capture is some isolated incident. The Israeli news media report, although the international news media never report it, that since the beginning of this year, the Israeli Army and security services have uncovered 29 Palestinian terrorist factories.

Twenty-nine! Imagine the quantities of weapons they found. And imagine the kind of terrible slaughter the Palestinians intended to carry out with all those weapons.

Let’s be grateful Israel’s security forces have once again pre-empted the terrorists. But at the same time, let’s learn an important lesson from this latest episode: the Palestinian Authority has never acted seriously against the terrorists, and never will. The PA regards the terrorists as “martyrs” and “heroes,” and it says so every day in its newspapers, radio shows, and television programs. It allows them to operate freely, and sometimes even directly assists them.

This week’s photograph proves it yet again.