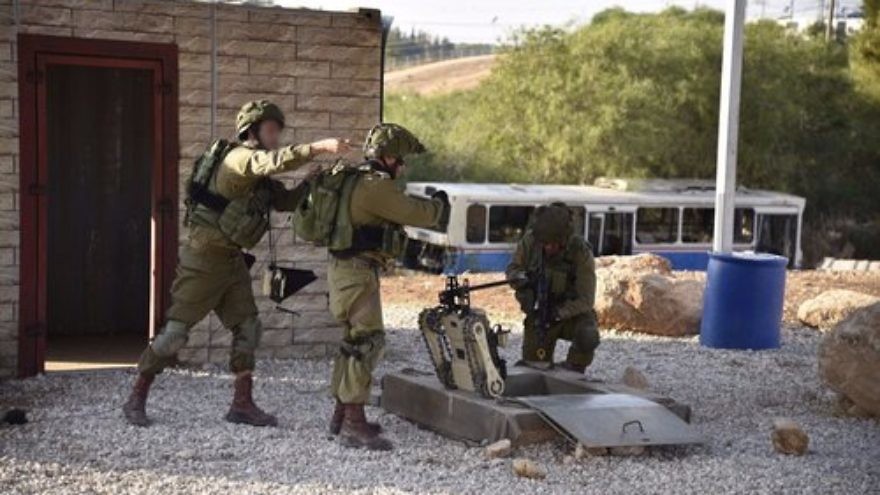 (November 15, 2017 / JNS) Representatives from 12 NATO countries recently visited Israel to take part in a first-of-its-kind conference on the challenges of urban warfare and combat in populated areas.

The need to engage enemies embedded in urban combat zones, megacities (metropolitan areas with more than 10 million inhabitants) and other populated regions is a challenge that is set to become increasingly prevalent for security forces around the world. Israel has amassed significant experience in this area, experts say.

“From Operation Defensive Shield in 2002 (launched to extinguish a wave of Palestinian suicide bombings and shootings in Israeli cities), the IDF’s operations have been focused in built-up village and city areas,” Dr. Eitan Shamir, former head of the National Security Doctrine Department in Israel’s Strategic Affairs Ministry, told JNS.org.

“The IDF set up one of the most advanced facilities of its kind in the world at the Tzelim Ground Forces Training Center,” Shamir said, referring to a mock Palestinian village used for Israeli military training. “American units and others have asked to come and train in it. I personally have heard senior American officers say they do not have a facility like the Israeli one, which was built after many lessons and experience.”

“Israel is a lab, where many things happen, and where future trends start,” an IDF colonel who heads a department in the military’s Strategic Planning Branch told JNS.org.

The conference enabled Israel to transmit the complexities and dilemmas it faces when dealing with enemies that operate out of civilian areas, he added.

Neither the colonel nor the department can be named for security reasons. JNS.org received an exclusive interview with the colonel, whose department is geared towards the mission of shedding light on the IDF’s security realities.

The department was established in 2016 as part of lessons learned from Israel’s 50-day conflict with Hamas in 2014.

Holding this type of dialogue with NATO members, the officer said, “comes from a place of learning from others and teaching others about the complexities of the situation we face. We think it is very hard for people [abroad] to internalize the complex challenges that Israel faces.”

During the conference, analysts, policy planners and military attaches from the U.S., Germany, France, Italy, Canada, Belgium, the Czech Republic, the U.K., Hungary and other states shared their experiences. They discussed recent terrorist incidents in Europe, as well as military operations in places such as Afghanistan, Iraq and Syria. They also intensively studied Israel’s insights from years of combat against Hamas in Gaza, Hezbollah in Lebanon and round-the-clock security operations in the West Bank.

The IDF shared with the guests key concepts on how to activate military force in built-up areas, and how to assemble and train such forces before deploying them.

NATO militaries have two things that Israel does not when it comes to combat: the ability to use proxies during ground operations, and extended periods of time to carry out a mission, said the IDF officer who helped organize the conference.

For example, the U.S.-led coalition against Islamic State had the Kurds on the ground to liberate the city of Mosul in Iraq, and had nine months during which it could support ground operations from the air.

Yet Israel must conduct its military maneuvers directly, and faces a limited amount of time to complete any task, due to intense rocket and missile fire that is directed at the Jewish state.

“We have to silence the sources of fire, through rapid ground intervention,” said the officer.

At the conference, the IDF stressed the need to prepare soldiers ahead of time for the difficult task of operating in populated areas. Western militaries may find themselves operating directly in populated areas in the future, due to major incidents such as an unconventional terrorist attack, the source cautioned.

“Preparation, including mentally preparing the soldiers, is vital. If you’re not ready for this, your achievements will not be good,” said the colonel.

The IDF also shared insights about the need to take steps to prepare an area before operating in it—and how to “stabilize” it after an operation is complete.

The Israeli military was asked why, after it took control of certain areas, civilians continued to be killed. IDF representatives responded by explaining the problem of “360 degrees,” which is inherent in urban warfare.

“It is not a problem to reach the Gazan coast in a day, but all around you, threats remain,” the officer said. “There are explosive devices at the street level, anti-tank missile threats, snipers from above and tunnels underground. Taking the area is just the start. The enemy is not dressed in military uniform. It hides in many spots, and it is difficult to engage. You can be fired upon and not identify the source of the fire.”

Upon the end of the conference, participants said their picture of Israel’s security challenges had been significantly enhanced.

The conference occurred as reports surfaced on an undeclared trip by IDF Chief of Staff Lt. Gen. Gadi Eizenkot to Brussels, where he met with NATO chiefs.

Last year, NATO’s Secretary-General Jens Stoltenberg, speaking at the alliance’s headquarters in Brussels, said cooperation with Israel is “essential.” He told Israeli President Reuven Rivlin at the time that “it is vital that countries which share the same values…stand together against hate and terrorism,” according to a report by AFP.

“A non-state actor fighting a guerrilla war from within an urban jungle, this is the type of enemy and challenge,” said Shamir, the former Strategic Affairs Ministry official. “The confrontation with radical Islam looks like it will continue, and in this context, the Arab-Muslim urban environment is highly relevant, and this is the natural environment in which the IDF acts.”

“There is an insight that says that future combat will increasingly take place in an urban environment—crisis areas that are mainly in developing countries, where ‘megacities’ are developing, and large neighborhoods that are receiving large numbers of poor village-based populations,” he said.

A second source from the IDF department that helped organize the conference with NATO countries told JNS.org, “We didn’t bring people here to preach to them, but to discuss the complex challenges that every one of us will have to deal with. Israel is a lab, but it is definitely not the only one facing these challenges. Other countries, sooner or later, probably sooner, will have to deal with these challenges.”

“The IDF has much to offer, but it is important to stress that this is a dialogue,” echoed Shamir. “NATO militaries have also gained experience in Afghanistan and Iraq, as well as in Africa and other places, so the IDF is also learning from their experiences.”