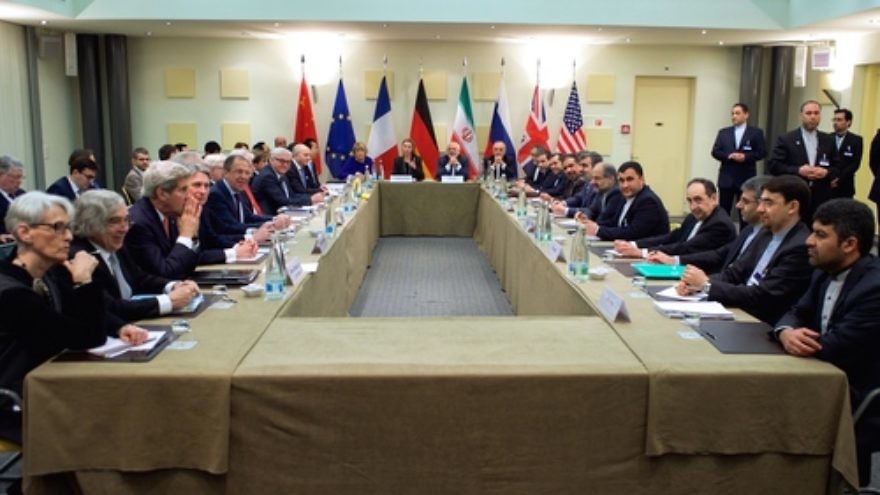 Foreign ministers and other officials from the P5+1 countries, the European Union, and Iran—including John Kerry of the United States, Philip Hammond of the United Kingdom, Sergey Lavrov of Russia, Frank-Walter Steinmeier of Germany, Laurent Fabius of France, Wang Yi of China, Federica Mogherini of the EU, and Javad Zarif of Iran—are pictured in Lausanne, Switzerland, on March 30, 2015, amid multilateral negotiations with Iran about the future of its nuclear program. Credit: United States Department of State.
Republish this article
1649 WORDS
Spread the word.
Help JNS grow!
Share now:

(April 7, 2015 / JNS) In the wake of the April 2 agreement reached between Iran and P5+1 nations on a preliminary nuclear deal, Israeli Prime Minister Benjamin Netanyahu warned in an interview with CNN on Sunday that the deal “keeps Iran’s vast nuclear infrastructure in place.”

A look at the versions of the framework agreement released by the U.S. and Iranian governments also reveals a number of key differences when it comes to what to do with Iran’s current uranium stockpiles, how long the restrictions on enrichment will last, and on the issue of international inspections. The agreement also remains a precursor to a final deal that must be agreed upon by June 30.

At the same time, Iran is forging ahead in other ways with its quest for dominance in the Middle East region. How might the negotiations’ final outcome affect Iran’s regional ambitions, and what is the current extent of the Islamic Republic’s power play?

JNS.org spoke with experts for a snapshot of Iran’s influence in Yemen, Lebanon, Syria, Iraq, and Gaza.

Judging from images appearing in Iranian media of airplanes loaded with humanitarian aid headed for Yemen, and of Shi’a-Muslim Houthi rebels being shipped to Iran for medical treatment, it seems that Iran is making little effort to hide its affinity for the Houthis, said Dr. Emanuele Ottolenghi, senior fellow at the Foundation for Defense of Democracies.

While it is not necessarily possible to verify precisely what materials are being shipped from Iran to Yemen, Ottolenghi described “a track record of Iran sending ships of aid”  containing weapons.

The establishment of direct flights between Iran and Yemen by the Iranian carrier Mahan Air is another indication of Iran’s interest in the Yemenite conflict. That airline has coordinated with the Islamic Revolutionary Guard Corps-Qods Force (IRGC-QF) by “secretly ferrying operatives, weapons, and funds on its flights,” U.S. Under Secretary for Terrorism and Financial Intelligence David S. Cohen said in 2011.

Gregory Gause, head of the International Affairs Department at the Bush School of Government and Public Service of Texas A&M University and a non-resident senior fellow at the Brookings Doha Center, said the Houthis are the more interested party in the Iranian-Houthi relationship.

“The Houthis are aligned with Iran, but they’re not the creation of Iran. They have more  so thrown themselves at the Iranians than the other way around,” Gause told JNS.org.

Dr. Hooshang Amirahmadi—a professor of planning and public policy at New Jersey-based Rutgers University and a candidate in Iran’s 2013 presidential race—argued that while the Houthis are Shi’a Muslims, as is the Iranian regime, the Houthis should not be equated with Hezbollah, a Shi’ia terror group that has much closer ties to Iran.

“Iran’s strategy toward Yemen is not a military strategy because Yemen is too far away from Iran,” Amirahmadi told JNS.org.

Yet Reuters has reported that Iran provided significant military and financial support to the Houthis before and after their takeover of Sana’a (Yemen’s capital) last September, quoting an anonymous senior Yemenite security official as saying, “Before the entrance into Sana’a, Iran started sending weapons here and gave a lot of support with money via visits abroad.”

Amirahmadi said that unlike Iranian-Houthi ties, the relationship between Iran and Lebanon-based Hezbollah is “brotherly.”

In Lebanon, it has become clear that Hezbollah “is willing to do whatever the Iranians ask them to,” said Gause.

“The fiction that Hezbollah was only a Lebanese nationalist organization whose whole mission was in Lebanon, and confronting Israel from Lebanon, has been disproven by the fact they’re willing to fight so directly in the Syrian civil war,” Gause said.

Meir Javedanfar, an Iranian-Israeli Middle East analyst who teaches contemporary Iranian politics at the Interdisciplinary Center Herzliya college in Israel, believes the Assad regime in Syria would not have survived without Iran’s influence.

“If it wasn’t for the fact that Hezbollah and Iran are supporting Assad militarily, his dictatorial regime would have been finished,”Javedanfar told JNS.org.

Gause said that from the beginning of the U.S. invasion of Iraq in 2003, Iran had established close relations with a number of Iraqi political actors and militias. Today, Iran is “the most important foreign player in Iraqi politics,” he said.

“In the 2010 election the Iranians intervened directly to help keep then Prime Minister Nouri al-Maliki in power. It was the Iranians who [then] basically told Maliki in 2014 that he had to go,” said Gause.

According to Ottolenghi, “both the political and military levels of the Iraqi Shi’a militia are very close to Iran, and the Shi’a political parties take much of their leads from Iran.”

Iran exerts additional influence over Iraq through “business, trade, investments, people-to-people programs, religious pilgrimages, access to the holy sites of Shi’a Islam,” and more, Ottolenghi explained. That influence, he said, has contributed to the current sectarian violence in Iraq.

“For all intents and purposes… there’s a civil war going on within Iraq as well,” Ottolenghi said.

In the meantime, the rise of the Islamic State terror group in Iraq and Syria has become a major problem for Iran. In addition to threatening Iran’s Shi’a proxies in the Iraqi government, Islamic State threatens the regional government in Iraq’s Kurdish region, which has been a significant trade partner for Iran, noted Ottolenghi. Islamic State could also eventually threaten the long-term viability of the Assad regime in Syria.

Iran has made it clear that it is not going to allow its “allies in Bagdad to be pushed out of power by an [Islamic State] blitzkrieg,” Gause said.

Gause said Hamas and Iran have been “allies of convenience” since 2007, when Hamas took over Gaza, “because the Iranians were willing to support them and Hamas was happy to get support from anywhere.” Ever since last summer’s war with Israel, Hamas—a Sunni-Muslim Palestinian terror group—“remains dependent on Iranian financial support by and large,” Ottolenghi said.

Hamas has benefited from training and equipment from Iran, especially during last summer’s Gaza war. There have been reports of Hamas fighters being sent to Iran for training, and the sophistication of the tunnels that Hamas terrorists built under the Gaza-Israel border indicates that they might have received training from the engineering corps of Iran’s Revolutionary Guards.

But Gause said Iran’s involvement in the Syrian civil war “has made it harder for Sunni groups like Hamas to be openly aligned with the Iranians… because [the war in Syria] really polarized sectarian sentiment in the region.”

Impact of the nuclear deal

Amirahmadi said he believes Iran will be more aggressive in the region if, despite the newly reached framework, the nuclear negotiators ultimately fail to produce a final agreement by June. With the deal in place, Iran is likely to behave more moderately, he said.

Meanwhile, Saudi Arabia, Israel, and even Turkey—though the latter country has been relatively quiet on the issue—all do not believe that any deal will stop Iran from attaining nuclear weapons.

“The issue is not the number of centrifuges or the amount of enrichment. It’s the trust. [Such countries] say [Iran’s] regime is a cheater… [that] they will go behind the backs of the IAEA (International Atomic Energy Agency, the U.S., and everyone else to build a bomb,” Amirahmadi said.

Gause said Saudi Arabia—a Sunni-Muslim rival of Shi’a Iran—has failed in its “efforts to roll back Iranian influence in the region.” The Saudis and some other Gulf states fear that Iran “will try to disrupt their domestic politics by trying to activate links with Shi’a communities,” he said. Bahrain, for instance, has a Sunni monarchy but a Shi’a-majority population. Countries like Saudi Arabia, said Gause, have “come to the conclusion that the U.S. isn’t going to take the lead in trying to block Iran’s regional games, and if that’s not going to happen, then they are going to have to do it.”

Javedanfar believes that if the newly agreed-upon framework falls apart before June, Iran will seek to wreak havoc in the Middle East in order to strengthen its future negotiating position.

Even with the deal, preliminary or final, there is still “going to be instability in this re-gion, because Iran is going to have more money—because some of the sanctions will be removed—and [Iran] will give it to all kinds of extremist groups in Iraq or the Assad re-gime, Hezbollah, and probably to the Houthis,” he said.

Furthermore, signs are already emerging that other Middle East countries are likely to react to the new framework, especially if it is later finalized, by expanding their own nuclear programs. Last week, Jordan already signed a $10 billion deal with Russia to build its first nuclear power plant.

“The pushback against Iran’s success will be to match Iran’s recognized nuclear capabil-ity with programs that these countries will now start,” said Ottolenghi, who added that even with no nuclear deal in place, “as long as there is no pushback… Iran will continue to interfere” in other Mideast countries’ affairs.